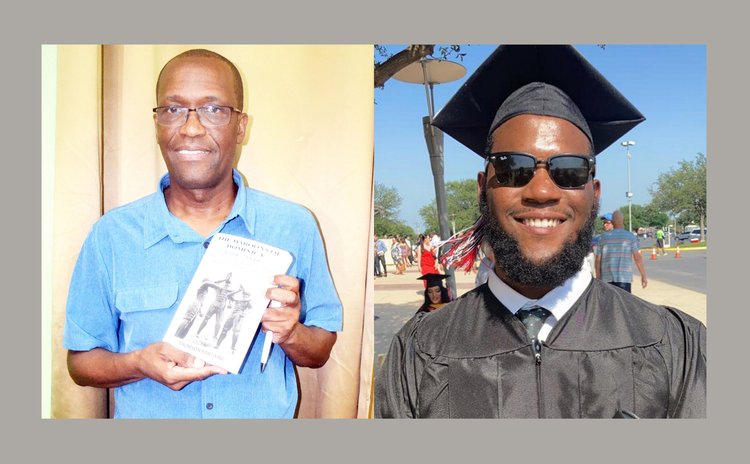 As he walked across the San Antonio stage on May 7, 2022, visually impaired Loik Charles, once again made history as he became the first blind Dominican to graduate from University.

The Morne Daniel resident obtained his BSc. degree in sociology with a minor in marketing at the University of the Incarnate Word in San Antonio, Texas.

Dr. Thompson Fontaine released his first of many books

A 326-page history book, 'The Maroons of Dominica 1764-1818 – Resistance, Rebellion, and Freedom from Slavery,' has been released by a former Government statistician and former economist at the International Monetary Fund, Dr. Thomson Fontaine.

The book which logs the history of Dominica's Maroons and their fight to end slavery on the island provides vivid details to the readers based on newspaper articles obtained from the national archives in the United Kingdom, parliament sittings, and other sources.

Dr. Fontaine described his four years of research on Dominica's past as an eye-opener and stressed the need for such publications to be included in Dominica's syllabus as he believes the education system will be doing a great disservice to the students if they are not taught about their past.

The book is available on amazon.com and additional copies have been sourced and will be sold in local bookstores. At present, Dr. Fontaine is working on two other projects which he hopes will be completed within the next year.

In The next coming month, students studying abroad have been given a commitment that they will see an increase in their monthly stipend.

Nearly a million dollars were seized at the port

A high-level investigation is underway by the Financial Intelligence Unit (FIU) following the discovery and seizure of nearly EC$1 million at the port.

Director of the FIU McKelson Ferrol revealed that a joint operation by the police, the Customs and Excise Division, and the FIU, resulted in the interception of US $332, 250 (equivalent to EC $897, 922.24) from one unidentified male adult of Lagoon Portsmouth residing at Canefield. According to Ferrol, on that date, the individual proceeded to the customs examination counter at Portsmouth to commence the examination process of one brown box bearing a Cost-U- Less logo, a shipment imported from St. Maarten which was transported via sea on a cargo vessel.

The FIU director revealed that upon examination of the box, the Customs officer saw three Gain soap powder boxes all containing US currency sealed in "clear vacuum-packed, sealed plastic bags."

He said the four packages were examined and counted and the male individual was arrested on suspicion of breaches of the Customs Act.

Following an investigation by the Customs Division, both FIU and the Director of Public Prosecution (DPP) were engaged. He said an application was filed for the forfeiture of the cash pursuant to the Proceeds of Crime Act at the Magistrate's court and investigations into the matter are ongoing.

Within the next year, Dominica Electricity Services Limited (DOMLEC) has set a goal to achieve world-class safety and one of the steps which the company is taking to achieve this goal is the observance of Health and Safety Month.

Within the month of May, a series of activities will be held on the theme: "The safe way is the best way." As revealed by Health and Safety Officer, Brandon Henry, these will include the recruitment of employees to join the health and safety team as well as the promotion of department safety initiatives "to ensure that company is a safer place to be."

On Mondays, attention will also be placed on developing healthy habits while Thursdays have been designated as Quiz Day, which will give employees the opportunity to win small tokens of appreciation. As further highlighted, throughout Health and Safety month, DOMLEC will be visiting various schools on the island to educate students on the importance of safety and present them with the opportunity to interact with the employees of DOMLEC.