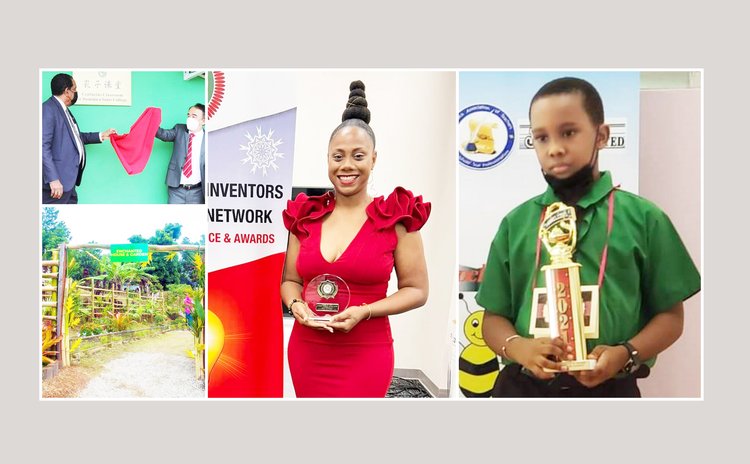 The twin communities of Eggleston and Giraudel exploded with colour over the weekend, following the grand return of the long-awaited annual flower show/market fair.

The diverse flora of the Nature Island was on full display during the three-day 'Enchanted Garden' event on the 2.6 acres of botanic land which has now become the permanent home for the show.

The activities kicked off on Friday, May 27, with an official launch and parade, followed by a local creole brunch on Saturday and a garden tea party on the final day.

Member of Parliament for the Roseau South Constituency, Chekira Lockhart-Hypolite, has said that the enchanted garden flower show represents a revitalization of community tradition and serves as a prelude to the reintroduction of the national flower show in October 2022.

On May 24, nine primary school students vied for spelling bee supremacy, but in the end, Jeanmik La Pinard of the Goodwill Primary School emerged victorious and copped the coveted title of the 2022 Primary school Spelling Bee Champion.

The runner-up in the revived Dominica Association of Teachers (DAT) Spelling Bee Competition was Thierry Lature from St. Mary's Primary (SMA) and Adharie Samuel from the Wills Strathmore Stevens Primary School who came in third.

Other participants of the competition included Elkan Edwards from the Roosevelt Douglas Primary School, Neveya Richards of the St. Luke's Primary School, and Arrianna Mathurin of the Delices Primary School, who emerged district winners in the preliminary rounds that were held the previous week.

Another profitable year for NCCU

Despite the ongoing COVID-19 pandemic, Dominica's largest credit union, the National Cooperative Credit Union (NCCU), is reporting a net increase of over $2.5 million for the year 2021 when compared to the previous year.

During the financial institution's 12th Annual General Meeting (AGM) treasurer of the NCCU, Euan James stated that their total revenue was $38.8 million within the past year, primarily due to interest from loans at $31.7 million, income from investment at $5.7 million and other income at $1.3 million.

The total operating cost increased by $1.4 million to $15.7 million, an increase of 10% over the 2020 figure of $14.3 million, primarily due to personnel expenses, computer services expenses, occupancy expenses, and security services.

A Confucius classroom which will offer an academic environment for residents of Dominica to learn about Chinese culture, language, culinary arts, martial arts, etc was officially opened at the Dominica State College (DSC) on May 26.

In 2019 the DSC and the Confucius Institute of China, a non-governmental educational institute, entered into a partnership agreement to establish the tertiary institution.

On July 22, 2020, the president of the college signed a contract with Hunan Construction Engineering Group for US$150,000 to reconstruct a building on campus to house the Confucius classroom. As announced, the classroom will also enable Chinese nationals to learn about Dominica's culture

This adds to a list of notable and respected organisations that have recognised the efforts and talents of Dublin-Dangleben and the impact of her burgeoning business.

Organised by the UK-based GlobalWIIN, Dublin-Dangleben says she is grateful for the special honour, adding that she has high hopes for CaribbWIIN, which brought together global female pioneers, leaders, entrepreneurs, and influencers and their amazing Caribbean counterparts to network and discuss issues relevant to innovation and sustainability.

As is the case with many businesses, Dublin-Dangleben's company was started with a need, when in 2014 she was unable to find products to care for her hair which she was transitioning from processed to a natural state.

Her products which include whipped shea butter as well as turmeric and Clay Face and Body Mask among others are formulated using local and Caribbean indigenous fruit, leaf and flower extracts, dried herbs, glycerides, and essential oils.