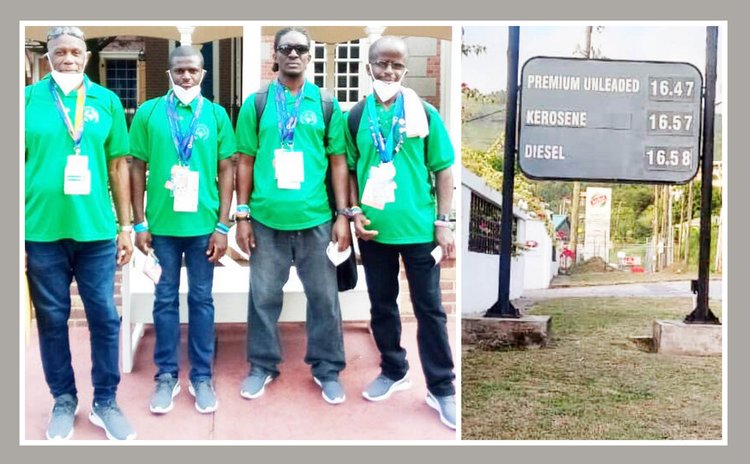 Another rise in fuel prices

Just a few weeks after the government of Dominica announced new measures "to keep fuel prices under control" in light of the continued increase in the global price of oil, vehicle owners last week had to cuff up additional funds at the pump.

According to a memo from the permanent secretary (Ag) in the Ministry of Trade Commerce Entrepreneurship, Innovation, Business and Export Development, Margaret Roudette-Baptiste, effective June 17, the wholesale gasoline price will be sold at $15.77 per gallon while the retail price has been increased to $16.47 per gallon. Diesel will now be sold at wholesale at $15.93, retail at $16.58 per gallon while kerosene has also been increased to 16.09 and 16.57 per gallon, wholesale and retail respectively.

In announcing the increase rate last month -May 3- a press release from the government stated that the Cabinet decided to remove the customs service charge on gasoline and diesel with immediate effect.

Duo Crispin Daley and Radian Felix cupped their medal in the 100-meters field event while Michael Detouche earned his in Bocce while competing along with 5,900 athletes from across the United States and the Caribbean, in the 2022 Special Olympics USA Games which took place from June 5 – 12.

"Crispin Daley captured silver in the 100 meters race here today in Orlando, Florida and of course, the other good news is Raedian Felix also captured a medal, getting bronze. He ran 13.65 with Delaware and some top players from the other countries in the US," Special Olympics Dominica National Director, Ainsworth Irish, said.

He along with coach Julian Benjamin made up Dominica's five-man delegation which attended the games. According to Irish, following this competition, preparation will continue for the Special Olympics World Games which will take place in Berlin, Germany from June 17 – 25, 2023.

"There is no need to fear," says Director of Trade, Matthan J. Walter, while addressing claims made in a video circulating on social media that major shipping lines will be grounded in the next two weeks due to the increase in fuel prices, making importation difficult for countries in the region.

"I want to state that this is simply fear-mongering," he stated. "If we have to speak to some of the products that he spoke to in his recording, meaning rice and sugar, because of the CSME (CARICOM Single Market and Economy) arrangements that we have, we import (the) majority of our rice from Guyana and our sugar also from Guyana and lately from Belize and so our rice and sugar do not come from too far afield."

According to Walter, the gloom and doom that were reflected in the recording should not be taken at face value at all.

The Dominican tech firm, Open Solutions for Health (OS4H), has developed and implemented a digitized National Electronic Immunization Registry in collaboration with the Ministry of Health, Wellness, and New Health Investment to improve data management and increase citizens' access to immunization records.

The Electronic Immunization Registry (EIR) is an online tool, which facilitates the monitoring of individual immunization schedules and the storage of immunization histories and is expected to enhance the performance, coverage, and efficiency of the Expanded Programme on Immunization (EPI).

The EIR was commissioned for Dominica by the EPI Unit of the Ministry of Health, Wellness, and New Health Investment and funded by the Pan American Health Organization (PAHO).

The Independent Regulatory Commission (IRC) has proposed new rules and changes to procedures for setting and reviewing tariffs for electricity supply. The IRC has issued a Notice of Proposed Rulemaking (NPRM) for stakeholder feedback, which describes its general approach to amending the "Tariff Regime for Dominica Electricity Services Ltd (DOMLEC). The IRC may issue an NPRM when it intends to amend rules or place a position in its Decision Documents, and request public comment on its proposals.

The current NPRM has proposed guidelines that will resolve preliminary tasks that should be performed before DOMLEC issues its Notice of Intent to File for new electricity rates. According to the IRC, DOMLEC is required to submit its tariff proposals to them as part of the general procedures for the review of electricity rates.

The Commission's argument is that the 60-day period, as stated in the Electricity Supply Act of 2006 does not provide sufficient time for the review and approval of DOMLEC's submission of new rates. The standard filing requirements for the rate review application of the decision document must therefore be amended, in a bid to ensure an efficient and effective process towards the determination of new electricity rates and modernization of the tariff structure.

The specific changes being proposed are contained in the NPRM. A notable additional amendment that the IRC has proposed, is to change the tariff review period from three to five years.