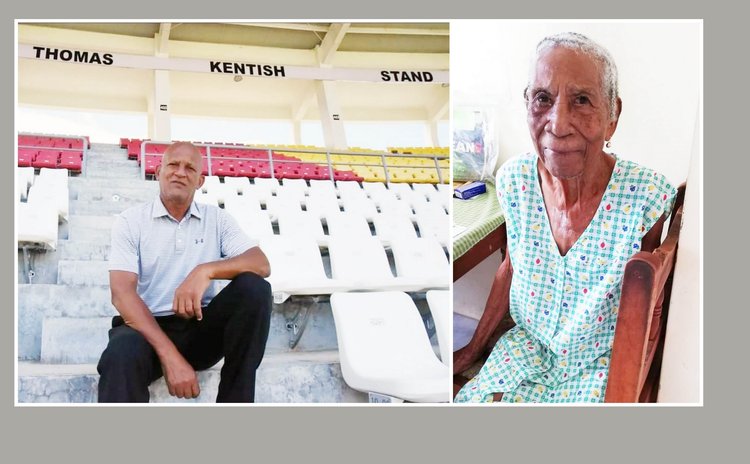 For his sterling contribution to sports here in Dominica, especially in the field of cricket, the East Stand at the Windsor Park Sports Stadium has been named after one of Dominica's greatest sportsmen, Thomas Zephaniah Kentish.

Speaking at a ceremony held to unveil the "Thomas Kentish Stand" on Friday morning, former Dominica and Windward Island players described this gesture by the government as an "honour" to be fitted among some of the great names who have already been inducted into the cricket hall of fame at the Windsor Park.

Kentish represented Dominica at the senior levels in both cricket and football. He got his first national call-up at the tender age of 14 when he was selected to represent the Dominica Under-19 Cricket Team where he cemented his spot for five consecutive years, during which he represented the Windward Islands and the Combined Islands in the West Indies Under-19 Cricket Tournaments.

He took his maiden first-class five-wicket haul in only his second Shell Shield match, returning figures of 6 for 69 against Barbados. He took another two five-wicket hauls during the 1984–85 season, taking 20 wickets from five matches to finish as his team's leading wicket-taker (and seventh in the overall competition).

Kentish played his last matches for the Windward Islands during the 1991–92 season, aged 34. In his final limited-overs fixture, against Guyana, he took a career-best 4/12 from 7.4 overs, which saw him named man-of-the-match. The sports star ended his playing career with well over 200 wickets for Dominica and 135 wickets in First-Class cricket at an average of 32.16 and was regarded as one of the leading wicket-takers in Windward Islands Cricket.

Just two months after celebrating her 103 birthday, Riviere Cyrique has lost its oldest living person, Ms. Antonine Roberts. The island gem who in her younger days worked as a caretaker for elderly people was born on April 30, 1919, and passed away on June 20, 2022.

Entry protocols to the stadium have been lifted to allow both vaccinated and unvaccinated individuals to enter the Windsor Park Sports Stadium (WPSS) for the upcoming T20's West Indies vs Bangladesh.

However, cricket lovers looking forward to attending the event on July 2nd and 3rd 2022 are advised that health and safety protocols must be adhered to, including mask-wearing and sanitization upon entrance to the stadium and stands.

According to a statement from Discover Dominica Authorities (DDA), patrons can expect to be treated to a festive cricket experience during the matches. The Stadium Forecourt will come alive with authentic elements of Dominica's Carnival experience and its unique heritage, through cultural performances, dance, the Kalinago people, and the famous sounds of the popular Lapo Kabwit.

Ticket prices for the games include a 50% discount for those 65 years and over and children 12 and under.

Prime Minister Roosevelt Skerrit, has pledged his government commitment to work with the newly elected Prime Minister of Grenada Dickon Mitchell and the Nation Democratic Congress (NDC) "to advance the common development goals of the regions.

Skerrit's comments came after Grenada's centre-left opposition party won the general elections held on Thursday, June 23. According to the results of the Parliamentary Elections Office (PEO), the NDC won 9 of the 15 seats in the House of Representatives. The center-right New National Party (NNP) led by former Prime Minister Dr. Keith Mitchell won the remaining 6 seats. With the resounding victory of the NDC, 44-year-old lawyer Dickon Mitchell was elected as the new Prime Minister of Grenada, Carriacou, and Petite Martinique.

On the morning of June 24, Dickon Mitchell, who assumed the leadership of the NDC eight months ago, was sworn in by Governor-General Cécile La Grenade as prime minister for the period 2022-2027.

In his inauguration speech, Mitchell expressed his gratitude to the people for their overwhelming support and vowed to strengthen democracy and work together with the opposition for the benefit of the nation.

Eight hundred and fifty-four students, including 417 girls and 437 boys have this year written Grade Six National Assessment (G6NA) exams here in Dominica. According to Education Minister, Octavia Alfred, the exam followed the same format as in the past, except for the Social Sciences paper, which was done in an online format. She also noted that students were given practice in taking these tests and previously completed two mock exams online. Remaining vigilant of the ongoing COVID-19 pandemic, Alfred revealed that all students were seated at least three feet away from each other.