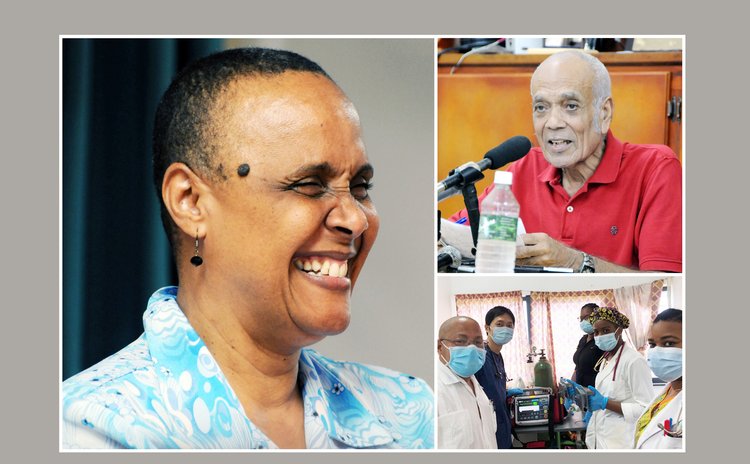 After 39 years of service to the different abled community here in Dominica, Nathalie Murphy has officially bid farewell to the Dominica Association of Persons with Disabilities (DAPA) as she retires.

On Friday, July 1, 2022, the departure of Murphy who served as DAPD's Executive Director for over 19 years took effect.

Mrs. Murphy who's been dubbed as a pioneer of the disability movement in Dominica, within her nearly four decades in the field was instrumental in assisting DAPD to realize some significant goals and introduced events and activities which demonstrated that persons with disabilities are part of human diversity and equally participate in our social and economic development.

Since her leave, Earnica Esprit has been appointed to fill the position and brings to the post several wide-ranging skills necessary and needed for the further advancement of DAPD.

On June 28, the media fraternity in Dominica went into a state of mourning, following the passing of veteran journalist Emile Lancelot Sr. on June 28, 2022.

The late Emile Lancelot Sr. was involved in local government, serving on various local councils and as the first clerk of the Canefield Urban Council. His service to the community extended to Parents Advocating for Children with Disability in Society (PACIS), an advocacy organization that promotes the needs and rights of children with disabilities, where he served as an executive member for several years.

The sports enthusiast who died at the age of 87 at the Dominica China Friendship Hospital (DCFH) is survived by his wife Hearle Lancelot and five children. 35k for trafficking over 100 pounds of weed

Bellot and Williams pleaded not guilty to the charge while Graham entered a guilty plea which police prosecutor, Corporal Dale LeBlanc, accepted and offered no evidence against the first two defendants. Presiding Magistrate, Michael Ladaut, then struck off the case against Bellot and Williams for 'want of prosecution.'

According to the facts of the case presented to the court by the prosecution, on June 24, 2022, Woman Police Constable (WPC) Kayanner St.Hilaire applied and obtained a search warrant to search a compound in Vieille Case.

On arrival at the premises, on the strength of the warrant, WPC St. Hilaire along with other officers of the drug squad unit commenced their search after speaking with the defendant and others present.

While searching an unfurnished wooden structure where Graham and others were standing, the officers found five nylon bags, a carry-on bag, and a clear plastic bag with what appeared to be cannabis weed.

When questioned about the findings Graham responded, "first time I seeing that."

Graham, along with the others who were present on the premises, were arrested on suspicion of drug trafficking and were transported to the Police Headquarters in Roseau.

At the drug squad office, in the presence of the defendant, the drugs were weighed and totaled 63,626.6 grams. A charge was later preferred against Graham and he was brought before the Roseau Magistrate Court.

At the court hearing, defense attorney, Gina Thomas-Abraham, who represented the 20-year-old, pleaded with the court to "temper justice with mercy."

However, in handing down his judgment, Magistrate Laudat reprimanded Graham for his actions and said the court would not deviate from the sentencing guidelines.

The Division of Culture of Dominica has once again joined forces with numerous stakeholders to stage this year's 188th celebration of emancipation.

Among the calendar of events for the activities which will run from July 1 to August 13, 2022, includes a Kalinago Territory establishment day concert which was held on July 4, Afro-artistic on July 9, the annual African dress days on July 8, 15, 22 and 29 as well as a UWI film and discussion on July 14.

Other activities include the Francillia Agra art exhibition- on July 15 and 22, Massacre mural launch and cultural night on July 22, and the Cadence-lypso tribute festival to be held the final weekend of the month.

The activities will culminate on August 6 with the Golden Drum award ceremony and concert.

Last week, health professional Dr. Wu and his medical team recorded history for Dominica when they performed an electrical shock on a patient which restored a normal rhythm to the heart function of the patient and relieved his symptoms.

This was the first successful electrical cardioversion performed at the Dominica China Friendship Hospital (DFCH).

The patient has since been discharged with a regular heartbeat.