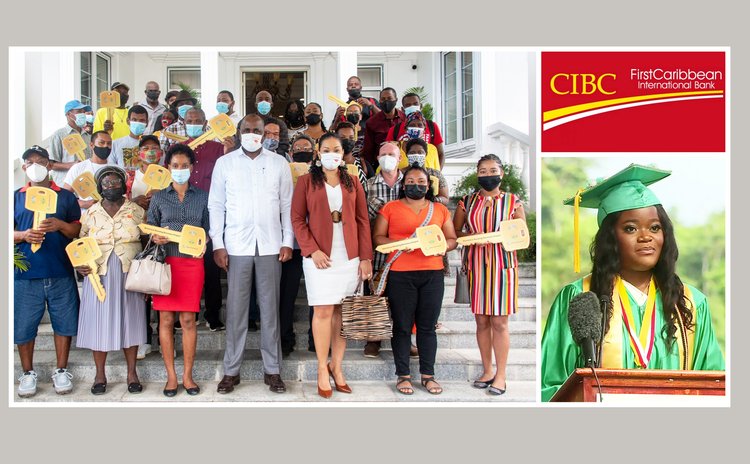 While delivering her valedictorian speech to her peers, the former Convent High School (CHS) student, stressed to her fellow graduates that "it is critical to remember that if the plans we hold for ourselves do not come to fruition, there is still much more in store."

Gordon graduated with first-class honours, and also went home with the programme awards in business administration and mathematics.

At the ceremony, Dr. Donald Peters who delivered his final remarks as the President of the College conferred approximately 400 degrees to graduates of the College's certificate programmes, associates, and bachelor's degree programmes.

No deal for NBD and First Caribbean bank

A "definitive agreement" announced in October that the National Bank of Dominica (NBD) would be acquiring the branches and banking operations of the FirstCaribbean International Bank Limited ("FirstCaribbean '') has been called.

In a statement, the FCIB reported that NBD has announced a change in its strategic direction, "which does not include an acquisition at this time."

The bank further announced that it will now begin the process of transferring its clients to the Bank of St. Vincent and the Grenadines Limited in St. Vincent and St. Kitts, Nevis, Anguilla National Bank in St. Kitts.

The bank notes that its Aruba sale was completed earlier this year and negotiations are presently ongoing for the proposed sale of CIBC FirstCaribbean's assets to Grenada Co-operative Bank Limited.

What will be done with its Dominica branch? No further word has been given.

A future housing development programme targeting young professionals in both the private and public sectors has officially been launched here in Dominica.

According to Prime Minister Roosevelt Skerrit, this is yet another component of the housing revolution for Dominica.

He revealed that homes will be built in Warner, Portsmouth, Layou, Grand Bay, and other locations across the island where the government owns land or can acquire land and will be sold to young adults at a concessional rate.

"We will sell it way below the cost of construction in an effort to get more young Dominicans to own their own home and to build their families," Skerrit declared.

He went on to highlight that the government is partnering with financial institutions for attractive loan interest rates to facilitate young people.

The Government of Dominica has "vehemently condemns" the assassination of the former and longest-serving Prime Minister of Japan, Shinzo Abe, who was shot while delivering a stump speech in the western city of Nara two days ahead of a national election on July 8.

According to a government press release, the 67-year-old was also a great friend of Dominica, under whose leadership Dominica-Japan relations were significantly strengthened.

"Shinzo Abe was indeed an exceptional statesman and visionary global leader. He will long be remembered for his unwavering dedication to the well-being of his people and country, as well as his efforts in the promotion of peace and understanding among nations," the release stated.

The main opposition United Workers Party (UWP) has also extended its condolences to the family, Government, and people of Japan.

According to the UWP, Abe's tragic killing is a "significant loss for the Japanese people and for those seeking to promote and uphold democratic principles the world over."

A suspect, named Tetsuya Yamagami, admitted shooting Abe with a homemade gun, and said he had a grudge against a "specific organisation", police said.

In the next coming months, the Waitukubuli National Trail (WNT) may undergo a facelift on all 14 segments to make the trail safer and more user-friendly.

An over half a million-dollar contract has been signed for the audit and design of WNT which showcases the best of Dominica – culture/heritage, local lifestyles, and our island's rugged terrain and wild nature, between the Government -Ministry of Agriculture- and Local Consultancy Pro Engineering Design Consultant (PENDEC).

In providing an overview of the project, Forestry Officer at the Project Implementation Unit, Ronald Charles detailed that the works will include the replacement of the trail bed, drainage system, signage and trail marking, infrastructure, and amenities to include bridges, benches, tables railings, picnic shelters, toilets, communication systems and capabilities for search and rescue.

During the field assessment, he reported that the consultant will document all trail hazards, conditions of the infrastructure and amenities.

An audit assessment will also be conducted of the mapping of the trail to classify all damage to the infrastructure, trail building, and water crossing, and other amenities and to make recommendations for their rehabilitation.

Phase two will include design as well as mapping of all 14 segments, the preparation of design briefs, detailed architectural and engineering design with cost and quantity estimates, and an itemized budget for infrastructure to include buildings, pedestrian crossing, water, gazebos, and lookouts, to name a few.