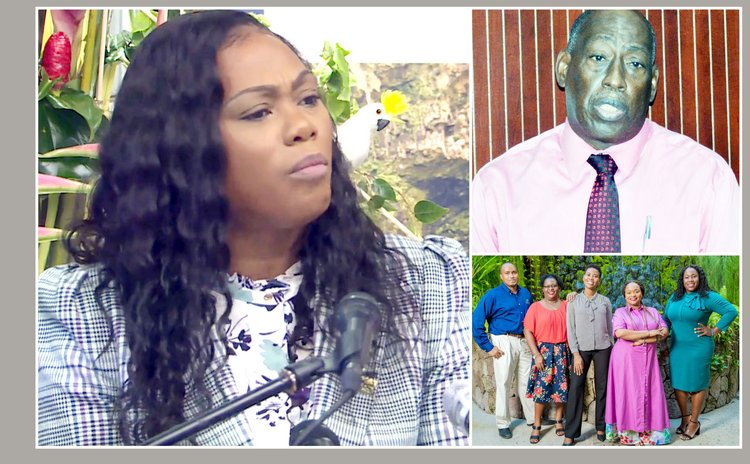 Large Photo: Denise Charles, Minister of Tourism; Top: James , CEO of the DCFH and members of GEMS board

Come September 2022, James, a graduate of the University of the West Indies and Walden University who holds a Ph.D. in Health Sector Reform from the University of Bangor, Wales, United Kingdom, will officially bid farewell to his position at the country's main health facility.

Deputy chairperson of the Dominica Hospital Authority Board, Eliud Williams confirmed the news, stating that Dr. James who was given a two-year service contract and assumed duties on January 11th, 2021, informed the board that he wished to return home, thus tendering his resignation.

According to Williams, an announcement will soon be made public for a suitable applicant to fill the position of CEO.

Chairmanship baton passed on to Charles

Addressing the ceremony, Charles shed light on her priorities and functions which include hospitality training and the enhancement of the regional transportation system. Her top priority would also be to remain on the availability of affordable travel options.

She stressed that she would utilize a critical approach on issues such as climate change, harmonizing legislation to carry out seamless operations in each other's territories.

While referring to the unit of OECS nations, Charles said 2022 is the year that is offering a perfect opportunity to strategize, regroup and rebound stronger both collectively and at individual levels. She said countries must take the opportunity to strengthen bilateral and regional ties on tourism so that, as a region, member states can share a diversified marketing campaign that helps in attracting more visitors and would support the livelihoods of people.

In addition to having the amount of Euro 47,700.00 seize from his possession, a Colombian national, Santiago Londono, also had to cuff up EC$5000, to escape six months of imprisonment.

According to Director of the Financial Intelligence Unit (FIU) McKelson Ferrol, the non-national recently attempted to leave to travel to St. Maarten via WINAIR flight WM813 with a large amount of cash, but during an inspection of his luggage the quantity of cash was found and a report was made to Customs.

The defendant was subsequently detained and the money was taken away for further examination. After being counted in his presence, the FUI was contacted, and Londono was then arrested on suspicion of "money laundering." He pleaded guilty at the magistrate court and was fined $5000.00 which he had to pay forthwith or in default six months imprisonment.

"No stone will be left unturned" in finding the missing child

As the search for missing 12-year-old Kernisha Etienne approaches the second month, Minister for National Security and Home Affairs Rayburn Blackmoore is pledging the commitment of the Government of Dominica as well as the Police Force (CDPF) to leaving "no stone unturned" in finding the missing child.

Speaking during a press conference, the minister stressed that the government and the police will not rest until some element of closure is brought to this matter.

He went on to reveal that presently, a team of investigators is working diligently to find the Warner Primary School student, who was allegedly abducted from her home around 10:30 pm on June 07, 2022.

"Looking at all elements from what I've been advised and what I know of that case, no stone will be left unturned in that regard," the security minister assured. "And we will continue with the search and work on every lead and building on the talent that we have and of course, using whatever additional resources that we need to have."

Blackmore went on to commend the public for their support, and urged everyone to "continue thinking about her and praying for the best."

The non-profit initiative aims to support projects that will have a positive and sustainable impact on the four "E's"-environment, entrepreneurship, education and entertainment & the arts.

"The mission of GEMS has always been about combining environmental consciousness with a commitment to delivering authentic, life-enriching experiences," said Gregor Nassief, Chief Executive Officer (CEO) of GEMS. "We remain focused on our staff and guests, but now we're also creating a path and opportunity for others, as well as giving even more attention to the environment."

A part of the education division of the Foundation, GEMS Hospitality School is an initiative aimed at allowing young people with an interest in the hospitality sector the opportunity to gain practical skills in various aspects of hospitality, including food and beverage, housekeeping, front desk operations, security, and bartending, the organization stated.

Each programme will run for a period of three months, with the next intake focusing on food and beverage, front desk, and housekeeping on August 15, 2022, and food and beverage, villa host, and concierge on October 15, 2022. Persons interested in applying to GEMS Hospitality School should send an email to foundation@gems.dm.