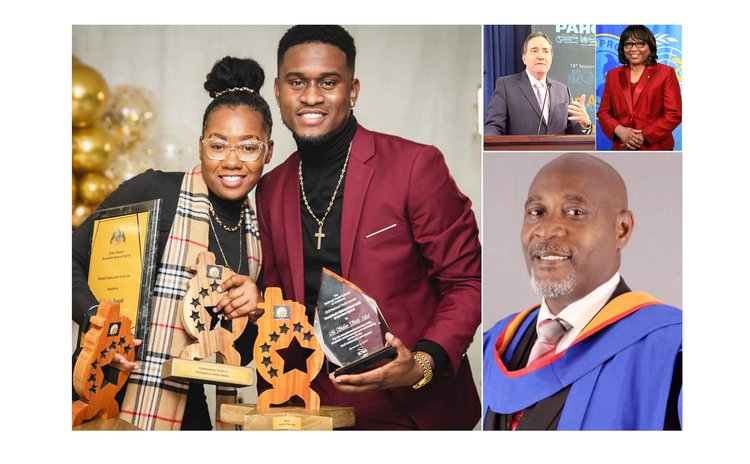 Dr. Barbosa da Silva Jr., a national of Brazil, will be the new Director of the Pan American Health Organisation (PAHO). He was elected last week by the PAHO Member States during the 30th Pan American Sanitary Conference.

To express its sincere appreciation to Dr Etienne for her many years of service to the PAHO and the World Health Organisation (WHO), and her leadership as Director of the Pan American Sanitary Bureau, a resolution was passed to designate Dr. Etienne, Director Emeritus of the Pan American Sanitary Bureau as of the date of her retirement January 31, 2023.

For his exemplary contribution to the art form of music, his exceptional leadership, mentorship for young people and outstanding service to his community and country by extension, Sheldon 'Shelly' Alfred has been awarded the Male Youth of the Year, and the National Youth Council of Dominica (NYCD's) President Most Outstanding Youth of the Year award.

For her mark in the philanthropy, volunteerism and business sectors, Lakeya Joseph took home the prestigious award of Female Youth of the Year, and the Prime Minister of Dominica National Youth Leader of the Year award.

Alfred who recently graduated from Harvard University and Joseph, the founder of Nature Blends, a health and wellness company that specialises in exotic teas, extracts, powders and oils and who also copped the award for Outstanding Youth in Entrepreneurship, received these wards during the NYCD 13th National Youth Awards (NYA) on September 26.

Dominican student, Yehudi Elton Scotsdail John has been announced as the University of the West Indies (UWI) Open Campus Valedictorian for 2022.

John, a senior sports development officer in the Ministry of Sports, Culture & Community Development, has been awarded this top position among all the graduates of the 44 sites of the Open Campus.

John, who completed his BSc Management Studies with First Class Honours, will give the valedictory address at the campus' virtual graduation ceremony on Saturday, 15 October 2022.

During his time at the Open Campus, John served as chair of the Dominica chapter of guild of students and he represented his campus in both the 2017 and 2019 UWI games, where he played basketball, volleyball and table tennis.

A three-day search for 13-year-old Jeamaique Sablon and 15-year-old Shahid Pemberton has resulted in the two teens being located in the neighbouring island of Guadeloupe.

Last week, family members of the Goodwill Secondary School (GSS) students issued a call to the public to assist in the ongoing search of the boys, who were last seen on September 23, 2022.

Three days later, the parents confirmed to local media that the teens had been found in French territories, but were unable to provide more information due to an ongoing police investigation.

Hunting for some of the popular delicacies which many enjoy during the independence seasons can now commence.

This as the Forestry, Wildlife and Parks Division of the Ministry of Environment, Rural Modernisation and Kalinago Upliftment, last week announced that the Government of Dominica has approved the temporary lifting of the ban on hunting of wildlife for the period October 1, 2022, to November 30, 2022, for persons in possession of a valid hunting licence.

During this period, licensed hunters may hunt crabs, (all members of the Gecarcinidae family), agouti, and manicou (opossum) only. The general public is reminded that it is an offence under the Forestry & Wildlife Act to hunt or fish in freshwater streams without a valid licence and that the hunting of all other species of animal, including the Mountain Chicken, all birds all snakes and iguanas are strictly prohibited.