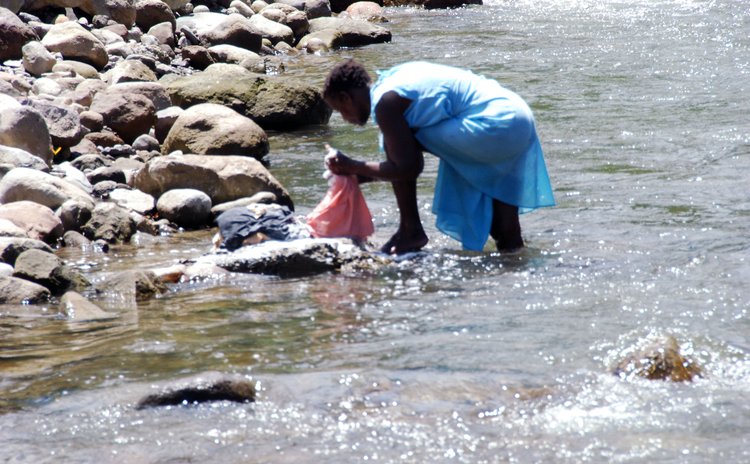 A woman washes her clothes in the Roseau River

"Show me your rivers and we will tell you who you are," is the theme for this year's World Rivers Day carded for September 28, 2014.

In 2005, a petition by Canadian advocate Mark Angelo, influenced the United Nations to declare the last Sunday in September as International World Rivers Day. Since Dominica is the Nature Isle of the Caribbean and home of 365 rivers and streams, the island was among countries around the world that recognized World Rivers Day.

"We think every river in Dominica should be protected. We would like that day to come when there will be a buffer zone along all our rivers. We have been calling for that," said the Chairman of Dominica's World River Day Committee, Father Franklyn Cuffy.

Cuffy added that the government of Dominica is "very much involved" with the initiatives made by the committee and have contributed to the studies of our rivers.
He referred to ongoing work on the Roseau River as an example and, according to him, "that in itself is saying that the government is concerned of the rivers".

But Cuffy said the current state of Dominica's rivers is "unhealthy".
Cuffy added that a challenge should be presented to the candidates who are to contest the election in different constituencies to present their plans for the rivers in each given constituency.

He also mentioned that he would like to see rivers celebrated like the World Creole Music Festival.

"Just as we have Creole Festival and those other festivals that could be a tourism product; in fact, the Titiwi Festival is part of the activities for independence but to me it should be World Rivers Day. I would like the day to come when we will have a river festival in Dominica…we could invite people to celebrate our rivers with us," Cuffy said. "Those 'wet fete' and those things that we like to do…they do not help in our water conservation."

Father Cuffy said that activities scheduled for 2014 World Rivers Day was spearheaded by National Youth Council of Dominica. The activities span from September 15-28, 2014.

He also expressed joy in the steady continuation of the Titiwi Festival which was first started by the World Rivers Day Committee. However, he is disappointed that the fact the focus has shifted towards the Titiwi and not the river.