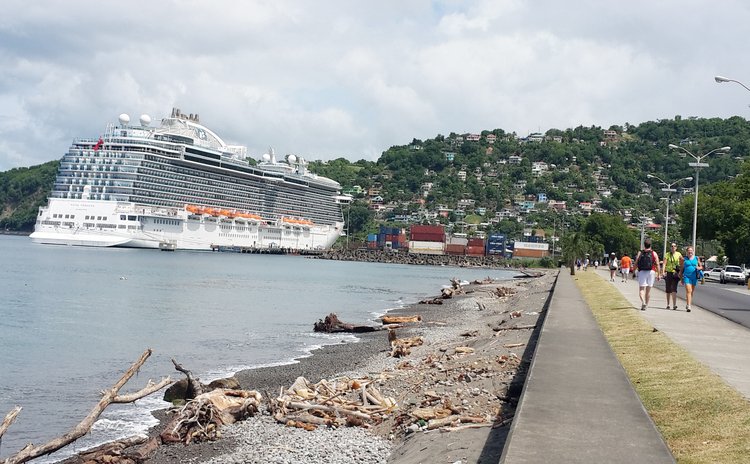 The Royal Princess came in today and like a giant white castle on the sea she provided an exciting foreground to the green mountains of Fond Cole.

The Royal Princess docked the Woodbridge Bay at Fond Cole today and since she is the first cruise ship of the season she brought hope to a post-Erika depressed economy.

You could feel the excitement, hear the drums, and smell the perfume of the cultural performers as they welcomed the cruise visitors.

The Royal Princess's crew and passengers saw the debris that Erika left on the beach near Fond Cole; they gaped at the naked Roseau River displaying a belly of rocks and sand, her usual garments of greenery on her banks washed away by Tropical Storm Erika.

"The industry has been eagerly awaiting the opening of the 2015/2016 cruise ship season," said a press release from the Discover Dominica Authority (DDA).

The release said 174 cruise calls like this morning's visit of the Royal Princess are expected for the cruise season. And they will bring about 290,000 passengers.

"We feel very proud of the fact that we have managed to maintain a very high number of cruise ship calls to the island," said Robert Tonge, the minister of tourism. "The fact that we have over 150 cruise ships making calls to the island indicates that the approach we have taken towards marketing the destination has continued to pay off and that Dominica is still a destination in high demand."

DDA says it "will continue to work with the relevant authorities to enhance the appeal of our city and therefore solicits to the cooperation of all tourism stakeholders in ensuring a welcoming and enjoyable visit for the cruise visitors. We ask that every effort is made to ensure a safe, friendly, clean and hassle free atmosphere for cruise visitors".