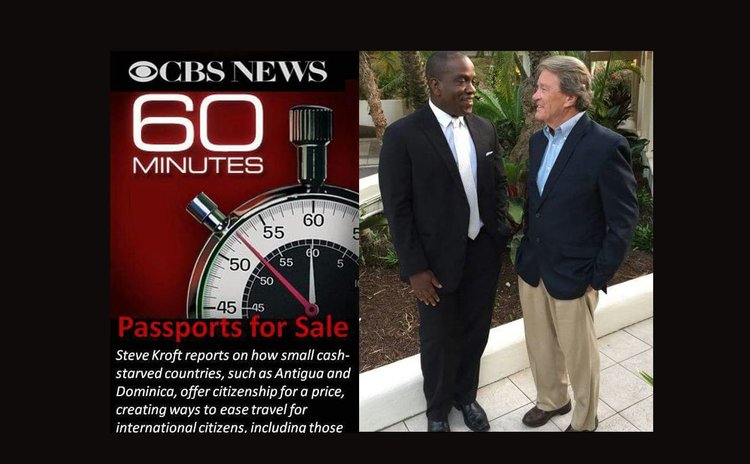 Linton and CBS's Kroft in a CBS promo

Hundreds of Dominicans will tune in tonight to 60 Minutes, the award-winning CBS weekly news documentary.

They will join about 12 million viewers around the world and they will hear, and see, what new information that journalist Steve Kroft has to offer about Dominica's (and Antigua's) Citizenship by Investment programme (CBI).

But even before CBS broadcasts the programme, Dominican politicians are already jabbing knives into each other.

For example, Anthony Astaphan, the Senior Counsel and spokesman for the Government of Dominica has accused Lennox Linton, the Leader of the Opposition, of "economic treason" and, according to Astaphan, Linton's decision to speak to CBS about the CBI is "a declaration of war against this country".

In response, Linton has written to Astaphan and warned him that he intends to seek legal advice on Astaphan's alleged libelous statement that he made on the pro-government Kairi FM radio station.

"I was, as Leader of the Opposition, interviewed by Steve Kroft and a small extract of that interview was aired in the advertisement in which I am quoted correctly as saying that it costs one hundred thousand dollars to get citizenship; one can pay the money from wherever he is, and doesn't even have to come to Dominica to get the citizenship; and agreed with Mr. Kroft that it was something like a mail order citizenship," Linton wrote to Astaphan on 31st December 2016.

He added: "On Friday December 30, 2016, an interview was aired on Kairi FM Radio Station in which you described me in the vilest of terms over the fact of my interview (which is yet to be aired), prefacing your comments thus: "And then we find out Lennox has volunteered to assist CBS in a story that is obviously, based on the preview, premised on lies . . ."

"You then went on to say, among other things, that it was my intention to "sabotage the Citizen by Investment Programme"; that my actions amounted to a "terrorist declaration of war"; that I had embarked on an "economic form of terrorism"; that "the only honest motive Linton would have [to travel to Antigua for that interview] is a desperate pathological desire for facial recognition"; that "Linton from today should be branded as a traitor to this country"; and that I "deliberately suppressed facts that [I] know to be true".

"Notwithstanding your political leanings, it behooves me to enquire of the basis on which you have determined to defame my character and my duty as a Parliamentary constituency representative in that manner, and to a listening audience which transcends the country's borders. As a man learned in the law, you are fully aware of my fundamental right of freedom of expression and the freedom to hold and communicate opinions without interference which is guaranteed by the Constitution of the Commonwealth of Dominica. And, as a human being living in a plural and democratic society, the rules of common decency should certainly govern your conduct and behaviour.

"I expect a response from you forthwith, as it is my intention to seek legal advice on this extremely despicable behavior which you have so boldly exhibited - even as you mourn the recent death of your father".

But, seriously, it is unlikely that Linton would have told CBS much more about Dominica's CBI than he has outlined in other fora.

For example, in a statement sent to the press on November 24th, 2016 Linton wrote that his party, the United Workers Party, "supports Citizenship By Investment, not as a cover for the sale of passports to become the only source of national income manipulated for selfish benefit by a privileged few, but as a safe source of investment dollars to build the growth engines of the economy for the creation of jobs and other sustainable socio-economic development benefits for all of Dominica".

In that document Linton also raised questions about the integrity, transparency, accountability of the CBI.

But CBS may only repeat some of what journalist Till Bruckner has written about the CBI in at least three articles.

For example in an article published on July 27, 2016 on his blog entitled "As Climate Change hits Economies Small Island States Turn to Passport Sales" Bruckner writes:

"To prospective tourists, the tiny Caribbean nation of Dominica markets itself as the 'Nature Island', touting its charms as "a diver's dream and hiker's paradise". But when Prime Minister Roosevelt Skerrit recently toured the Persian Gulf and Southeast Asia to woo foreign investors, his unique selling point was neither his country's colorful coral reefs nor its lush rainforests. Rather, it was visa-free travel to Europe: for as little as a hundred thousand U.S. dollars, foreigners can acquire citizenship of the Commonwealth of Dominica — and a passport that allows them to travel unimpeded to over one hundred countries worldwide, including the United Kingdom and the entire Schengen zone".

In the article Bruckner argues that Dominica may have had little choice but to sell its citizenships after the devastation of Tropical Storm Erika in 2015 and the continuous, and irreversible decline in the fortunes of the banana industry, one of Dominica' main income earner in the Eighties and Nineties.

But he also raised questions about freedom of information generally and about the CBI.

In an interview published on 19 January 2016 that he called "Diplomatic Passports for Sale, Claims Dominica's Opposition Leader" Bruckner wrote that Linton told him that the opposition was also concerned about the sale of diplomatic passports to questionable characters.

"Regarding the economic citizenship programme, what exactly are your demands of the government?" Bruckner asked Linton in the interview.

"We are calling for the programme to be purged of corruption, to be made transparent. The programme is so riddled with corruption, there is so much secrecy around it, what are they hiding?" he replied.