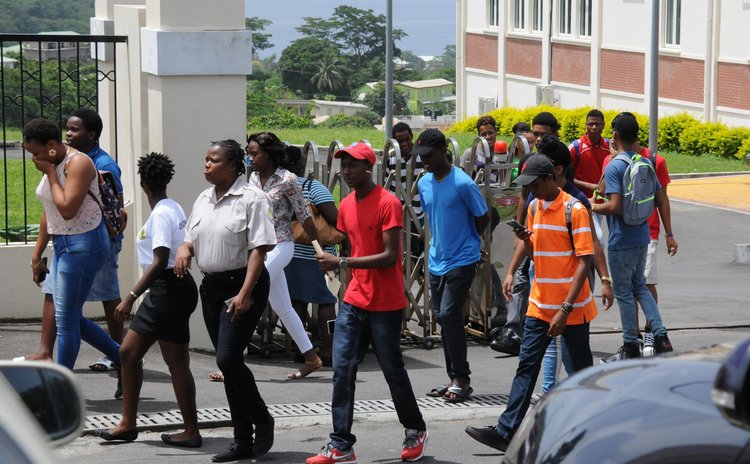 At the bottom of the cavernous auditorium of the new Dominica State College (DSC) Phael Lander, his DSC crest gleaming from the breast of his white t-shirt, blasted R Kelly's 1998 R&B hit: "I believe I can fly."

"If I just believe it, there's nothing to it

"I believe I can fly

"I believe I can touch the sky

"I think about it every night and day

"Spread my wings and fly away

Lander's song was supposed to be a boredom-breaker in a long list of speeches to be delivered that morning but it captured the essence of the orientation programme: motivating students towards their dream of achieving a college degree.

Today the DSC was buzzing like a bee-hive as the institution welcomed about 600 new students for its Orientation Week 2016.

At the official welcome DSC board chairman Dr. Ian Lambert told the students that they were about to "embark on an intellectual adventure" that will stretch the capacity of their minds and he hoped the students "will live in the suspense of not knowing it all".

The Theme for this year's orientation week is "DSC... More than an Education."

Commenting on that theme Dr. Schuyler Esprit, the DSC Registrar and Dean of Academic Affairs, said the students should be prepared for the college will have an impact on all aspects of their lives.

She then gave the students a few tips for succeeding at the DSC that included the need for students to follow the rules of the DSC.

"This my favourite one: go to sleep, but not in class," she said.

Michele Henderson, one of Dominica's most prominent singers gave an account of her recent sojourn at the DSC where, she said, students don't learn academics alone.

"You learn life," she said. "Please do not waste your time".

As part of the orientation programme on Monday parents of the freshmen gathered at the DSC auditorium for the annual parents' day that provided the parents with the opportunity to understand the traditions, culture and operations of the DSC.

The freshman's seminar is scheduled for tomorrow, Tuesday August 30, during which students will be engaged in interactive sessions with facilitators from within and outside of the DSC.

The major areas that will be covered in these seminars are leadership, sexual health, academic expectations, avoiding first year dilemmas, career and professionalism, peer to peer counselling, beyond the academics and conflict resolution.

On Wednesday, September 1, students are to be orientated into their specific faculties or divisions which will be followed by academic advising and registration into courses.

Thursday September is set aside for fun, sports and entertainment, the DSC Freshman's Social.

The DSC is a State-owned tertiary education institution, formerly the Clifton Dupigny Community College, but was re-established and renamed in September 2002.

The DSC offers a number of educational programmes in traditional and vocational subjects.