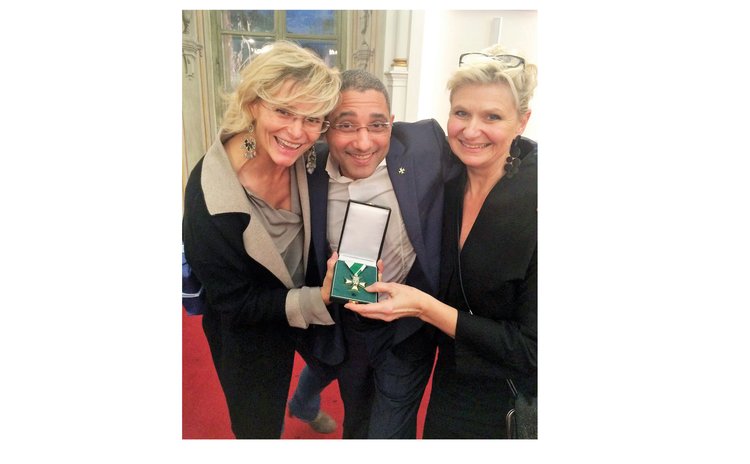 Darrel Toulon with friends after receiving one of his awards

Dominican-born Darrel Toulon is the director of ballet at the Graz Opera House in Austria. He also serves as a dance lecturer at the Music Theatre Department of the University of Arts in Graz, artistic director of the Alpha Group, and dance advisor for the Austrian Federal Arts Council. He is the recipient of the second German Video Dance Prize 1999, the first Austrian Dance Production Prize for Outstanding Achievement in 2002, and the Special Prize for Outstanding Achievement in Dance in Austria in 2003, writes UWC Atlantic College in Wales.

UWC says Darrel's first engagement as a dancer was with Tanz-Forum in Cologne, Germany, where he soon became a soloist. His past roles have included Romeo in 'Romeo and Juliet,' Alwa in 'Lulu,' Garcia in 'Carmen' and - as a guest with the Zurich Ballet - Joseph in 'Joseph's Legend.' His career has evolved through different artistic phases of dancing, acting, singing, designing, directing and choreographing. He has been involved in diverse productions such as ballet, modern dance, German Tanztheater, dance video, opera, drama, television and film.

Darrel's dance education began at Thamesdown Contemporary Dance Studios in Swindon, leading to a scholarship placement at Central School of Ballet in London, under the artistic guidance of Christopher Gable. "When I arrived at UWC, I was not a dancer. I was hugely involved in amateur dramatics at home and even had my own small theatre group before leaving for UWC. My parents had always frowned upon my extracurricular activities; they were concerned that I was spending too much time on my drama group and not enough on my academic studies. It is ironic to think that these were what gave my UWC application the edge over the other kids from my school. I was excited that there was this school that was interested in these other things!" recalls Darrel.

"I was thrilled to be able to choose Arts Centre Service as my community service activity. It was through this that I got to know and understand people from the world of professional theatre. The Vale of Glamorgan Musical Festival was a yearly event and the St Donat's Arts Centre was heavily involved. I remember one weekend, close to Christmas in my first year, when I traveled up to London to go to the theatre. I was blown away to realise that people did this for a living. I had, until then, found it really difficult to imagine that drama or dance could be your career!

"Being exposed to a committed teaching staff who were not pressing you to follow an automatic path was liberating. Back home in my community, and particularly my parents, the arts were not considered to be a 'serious, decent job.' At UWC we quickly realised that there were other ways to do and see things. This is when I discovered the concept of 'plurality of truths.' "Throughout my UWC years, I was still following a traditional route and started applying to universities to study molecular biology. My defining moment came whilst I was in the middle of a university interview. I was really trying to convince the interviewer that I was his guy - the best person for this prized scholarship to go and study molecular biology - when I heard a small voice in my head saying, 'Darrel, you lie! This will not make you happy. Stop!' I have increasingly come to rely on this voice inside; I appreciate its wisdom and strength. I have learnt to follow it".

He added: "Immediately after UWC, I completed a foundation course in dance which provided me access to the Central School of Ballet in London. I started late; I was 19 years old standing in a classroom full of 16-year-olds who had been dancing all their life. But I knew I wanted to do it. At UWC Atlantic College, I understood how vast a potential we carry with us. Without UWC and the guidance of the great teachers I met there, I would never have had my eyes and mind opened beyond pure academic achievement".

In addition, Toulon created choreographies for opera and dramatic productions by u. a. Roberto Ciulli, Sönke Wortmann, Günther Krämer, Christine Mielitz, Giancarlo del Monaco at the German and the Komische Oper in Berlin, as well as in Tübingen, Dusseldorf, Cologne and the Residenz Theater Munich.