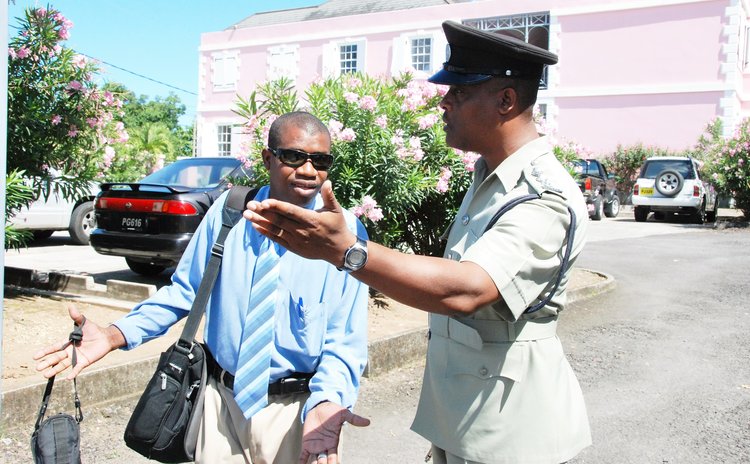 Jno Baptiste, left, is being led out of parliament in 2008

The issue of the continuing ban of journalist Carlisle Jno Baptiste from the parliament of Dominica was revived today by Opposition Leader Lennox Linton and Jno Baptiste himself as they spoke on Q95FM about official's refusal to allow Jno Baptiste into the building of parliament during the current sitting of the House of Assembly.

"This is against democracy in the country. This has to stop," Jno Baptiste said on Matt Peltier's talk show "Hot Seat".

"Today she (the Speaker) is taking out bread from my mouth," Jno Baptiste said.

Linton said he invited Jno Baptiste to Parliament by giving him one of two tickets that the Clerk of the House of Assembly issued to the Leader of the Opposition to hand to his invitees and that the people of Dominica must demand that the mistreatment of person's in parliament must stop.

The conflict between Carlisle Jno Baptiste and Alix Boyd Knights, the Speaker of the House of Assembly, has been ongoing for more than ten years.

The Sun published a story on the conflict in July 2008. It is reproduced below:

It was as predictable as tomorrow's dawn. But when it came some persons still wondered whether reasonable people should not have avoided it. Alix Boyd Knights, the Speaker of the Dominica House of Assembly and Carlisle Jno Baptiste, like two meteors from outer space, were apparently on a collision course and they clashed last week.

In an unprecedented decision last Thursday Speaker Knights banned Jno Baptiste from attending meetings of the House of Assembly until he apologises for allegedly disrespecting the sanctity of the House.

"When I came to the House of Assembly this morning a policeman told me he was acting on the instruction of the Speaker, that when Carlisle Jno Baptiste comes escort him out of the compounds of the House of Assembly," Jno Baptiste told the press afterwards. "The Speaker is just being vindictive and malicious. She will not get away with that. And I'll say that forcefully, I'm not going to back down."

Jno Baptiste said he was not given a reason for his expulsion from the House; Parliament had resumed after an adjournment during its current sitting. He said he could not explain the Speaker's action because he had attended other sessions of the House of Assembly since Speaker Knights had expelled him two weeks ago.

"(At that time) she claimed that I had a microphone (but) I only had my bag and an umbrella. I didn't have a microphone so I sat in my seat. I did not take her on because I know I did not have anything like she was talking about," he said.

Since he believed he was wrongly accused and that his expulsion was unfair, Jno Baptiste asked the Speaker for an apology.

In a letter to Speaker Knights, Thalia Remy, the President of the Media Workers Association of Dominica (MWAD) said she wished to express concern at the expulsion.

"Mr. Jno Baptiste attempted to comply with the House rules as he understood them, yet was expelled even when the fact that he had not breached them was brought to your attention," Remy wrote to Speaker Knights. "We acknowledge that Mr. Jno Baptiste did not immediately acknowledge or follow your instruction to leave the House as he should have done but contend that he acted in the knowledge that he was not carrying the microphone you alleged he had.

"To maintain continued good relations between the media and your office, MWAD suggests that we meet to discuss, clarify and document all unwritten rules which you would like the media to observe. Our executive can them remind/inform our membership of the specific rules," Remy stated.

But Jno Baptiste was not satisfied with the tone Remy's letter.

"I saw a letter written by the president (of MWAD) that I was really disappointed with and I said that in no uncertain terms," he said. "I asked that that letter not be submitted on my behalf."

Two years ago Speaker Knights and Jno Baptiste clashed over an alleged breach of the rules of the House of Assembly. Again the reporter felt the Speaker acted unfairly.

In a statement to Parliament last Thursday, Speaker Knights said she had had enough and has decided that Jno Baptiste should not attend other meetings of the House, unless he apologises. She said:

"I cannot and will not permit anyone to bring this House into disrepute and to drag this House in the media in such an unwarranted and unsavoury fashion. And it would be remiss of me if I did not remind this Honourable House that this was the very person who, sometime in November 2006 breached the well-known House rule of taking photographs without seeking and obtaining permission. As a result of that episode the President of MWAD called for a meeting with me so that I could go through all the rules with them. This I did and I recall specifically telling them that press persons come to the House only with their notebooks and their pens and I recall being asked 'but what must we do with our things and I recall saying 'leave them at your office.'

" In light of all what I have said therefore I have no choice but, on behalf of the chair and members of this Honourable House to refuse entry to the House and its precinct to Mr. Carlisle Jno Baptiste until he makes an apology in an appropriate form to the Speaker and the members of this Honourable House for (1) the derogatory references he made of the Speaker in the media and otherwise (2) falsely creating the impression to the public on several occasions in diverse media that he was put out of the House simply because the Speaker took his umbrella for a mike and (3) for publicly calling on the Speaker to apologise to him for reasons which he clearly knows to be untrue and really was a distortion of what really transpired."