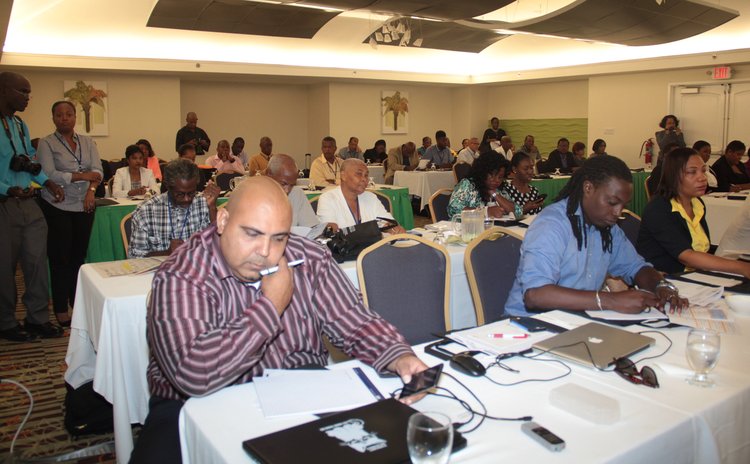 Attendees at the media law conference

About 68 person from 13 of the countries in CARICOM attend a two-day workshop held at the Radisson Beach Hotel in Barbados last week The workshop was dubbed "Improved access to justice in the Caribbean".

According to Dr. Miller, the project supports the development of model laws for the region, improving access to legal materials and to legal education by practitioners and the public.

"It promotes the use of alternative dispute resolution mechanisms to take the burden off the courts and build peaceful communities," she said. Dr. Miller said Canada has supported justice reform in the Caribbean since the 1980s and they maintain that commitment with funding of just over BDS$62 million to two projects delivered by two regional institutions, the Caribbean Court of Justice and the University of the West Indies.

Both projects, she said, give significant attention to public legal education as justice is everyone's business. Stakeholder consultations over the last year, she said, informed the IMPACT Justice team of the need to address the role of the media in informing the public about their rights and also to address the media's own need for information about their rights and responsibilities in a changing world.

"Long gone are the days when the print media and other traditional news providers were the predominant source of information to the public. With the growth of social media, and at a time when any member of the public armed with a smart phone can become the lead reporter of their own "newscast ", it is even more critical for journalists and broadcasters to set the example of ethical, accurate and fair journalism," Dr. Miller stated.

Also addressing participants was Professor Velma Newton Regional project Director of IMPACT JUSTICE who stated that the workshop was part of a series of Public Legal Education events for CARICOM Member States under the Canadian funded "Improved Access to Justice in the Caribbean" Project implemented by the University of the West Indies through the Caribbean Law Institute Centre at the Cave Hill Campus.

Meantime, experienced regional journalist Julian Rogers who spoke on "educating the public about their rights" said the media has a responsibility to keep the public informed, though it is acknowledged that this is not achieved without challenges.

"We have a responsibility to keep the public informed," he said, adding, "how we do that is up to us, and it is a challenge."

But while this is an unavoidable challenge which media practitioners must face, he noted, at the same time, journalism should be free from political interference.

Among the topics covered were defamation in the context of media law; the media and intellectual property; the rights of journalists; parliamentary and government reporting among others.