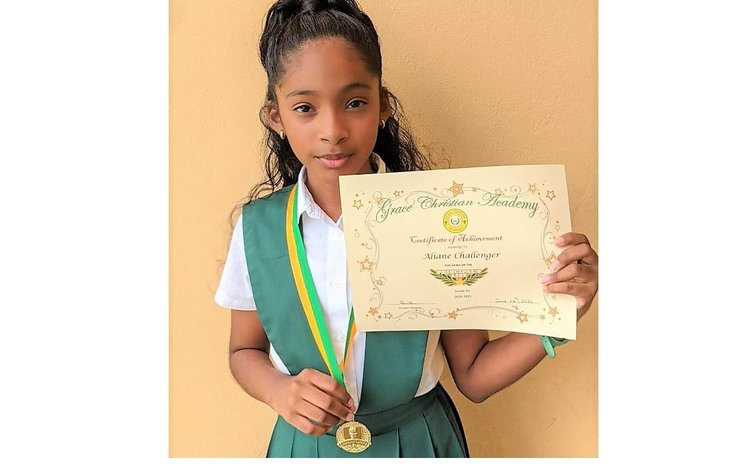 It's always been a dream of eleven-year-old Aliane Challenger to top the Grade Six National Assessment (G6NA), and while she couldn't have accomplished this dream here at home, she's done it in Antigua.

The young Kalinago who settled in the neighbouring Caribbean island almost four years ago, after the passage of Hurricane Maria, was announced on July 2, 2021, as the country's top student in the G6NA, outperforming 1,445 of her peers across 29 government schools and 28 private schools.

Aliane, who attended the Grace Christian Academy, is said to have always been at the top of her class.

Despite her previous accolades, she stated that she was in fact "surprised and in disbelief" and couldn't believe she had done so well.

Though Aliane admitted that it was a bit challenging at first dealing with the pandemic while balancing school, she said that after a while, she got the hang of it with some much-appreciated support from her teachers and family.

Offering some tips for other students who are also preparing for exams, the former Lighthouse Christian Academy student advised, "I think if they study, pray to God for their health and not panic, then they will do well."

Aliane loves music and enjoys playing the violin and piano; she also enjoys graphic designing and computers. She is the older of two children for pilot Oran Challenger and stay-at-home mom Annillia Challenger, both of whom are from Dominica.

Her father could not contain his excitement as he spoke about his daughter's outstanding accomplishment, said that Aliane has always been a top student and that it has always been one of her goals to place among the top three performers.

"Of course, I feel excited, but I was a little bit shocked. You know you have great expectations from your children and Aliane always studied hard, she put in a lot of extra work and has always set high goals for herself, so you are excited as a parent and a little shocked but then you think to yourself this was her goal of being in the top three, so certainly this is something that has brought a lot of excitement for me," Oran said

Her mother, Annillia also shared the excitement for her firstborn.

"Right now, every time I look at Aliane I just feel so happy. I guess I just feel like a good mom. It's just surreal. I know she worked hard and it was her goal to be in the top three but you know, it just all feels surreal. Now and then, even talking to you right now, I am getting goosebumps. It's just exciting nevertheless," she added.

As the top student, Challenger has secured a placement at the Antigua Girls' High School, but her family is also considering her attending a private high school.