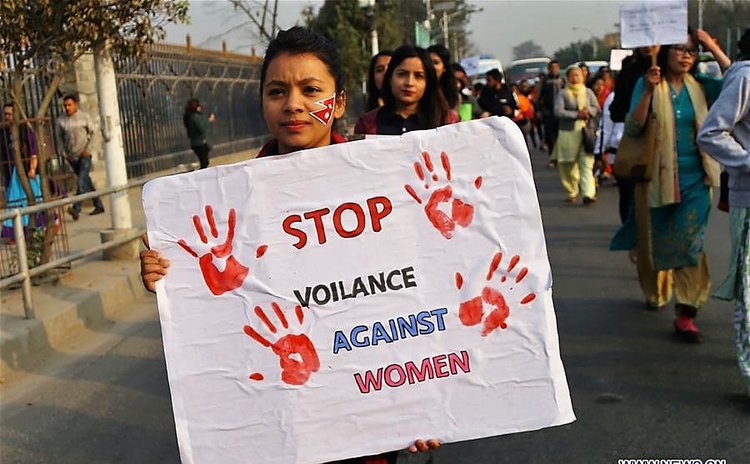 A woman holds a placard during a rally marking the International Women's Day with the theme of "Press for Progress" in Kathmandu, Nepal, March 8, 2018. (Xinhua/Sunil Sharma)

Men beware! Women may have begun taking up their rightful position in representative politics in Dominica and hence men's dominance of leadership at the level of parliamentary representative will soon be over. And it will not be a day too soon.

To foresee how women will soon obtain parity in politics in Dominica just look at the number of women that Prime Minister Skerrit named in the Dominica Labour Party (DLP) team of 21 at Londonderry on 17 February.

The names included: Roselyn Paul – Paix Bouche; Catherine Daniel – Colihaut; Denise Charles – Soufriere; Greta Roberts – Grand Fond; Anicka Charles – Marigot; Octavia Alfred – Castle Bruce; Marva Williams – Petite Savanne; Chekira Lockhart Hypolite – Roseau South; Adis King – St Joseph and Melissa Poponne Skerrit – Roseau Central. Note that Anicka Charles dropped out a day after Skerrit announced her name. We do not yet know how many women will be named by the opposition United Workers Party (UWP) in their team of 21 contestants but the numbers could easily match DLP's because there are so few good men around compared to numerous educated, dedicated women. But given the alarming status of men in Dominican society-mainly poorly educated under achievers and sewo-seekers- women will soon not only obtain parity in parliament but eventually outnumber men as they have been doing in major institutions such as the church, law and in medicine.

To illustrate that fact, as we stated a few years ago, a picture in the annual report of the top management at the Agricultural and Industrial Development Bank (AIDB) was striking. Eleven members of the senior management team of the AIDB had their headshots plastered over a page of the bank's 2015 annual report and only one, the then general manager Julius Corbette, was male. Corbette has retired since then and a female manager has replaced him.

Corbette told us, when the Sun inquired about the significance of that photo, that it was not surprising but that the women were quite qualified. What's more, the female imbalance at the ADB will remain unchanged for a long while, Corbette said, because many applications coming to the bank were from women. So, from the perspective of the AID Bank, women have not only achieved parity with men, they have virtually smothered them. In Dominica's civil service and in the law profession the situation is similar-women are quickly occupying most of the top positions. And many men, sad to say, are out there slamming dominos, riding noisy motorcycles, occupying the Dominica State Prisons and behaving badly.

But the situation will get better, or worse, depending on your perspective on the parity between men and women in the work place.

As far as The University of the West Indies (UWI) Open Campus is concerned, there is roughly an 80-20 participation in some faculties, more females than males; from law to humanities women dominate and even in engineering, the bastion of male dominance, things are changing.

Women, it seems, have greater drive; they are more progressive, in spite of the fact that the cards have always been stacked against them. Because women have had to work twice as hard to get half as far, they are pushing on and succeeding while men are being left behind. This is bad news for the development of the Dominican society since fifty percent of our human resource, the males, are underperforming. Women, therefore, continue to shoulder an unfair load in the advancement of our community. Except, perhaps, in parliament.

This week, as Dominica and the rest of the world observed International Women's Day (IWD) the issues affecting women, especially their participation in active politics, will receive some additional attention. At least in the press. A few years ago, IWD sought to focus on women's struggle to break through the glass ceiling in government, business and academia, as the United Nations (UN) IWD promotional literature stated.

The UN believes that though women have made significant strides over the last few years, in all major areas of development, they have lagged behind in real participation in decision making at the highest levels.

In fact, the UN Secretary General, in his message said that participation of women in decision-making is fundamental to the achievement of equality. He proposed that women should be active participants in decision-making "with equal strength and equal numbers". But although there were then 11 female heads of state or government in the world, the goal of parity between women and men in parliament was not expected before the year 2040, according to Rachel Mayanja, the UN Secretary General's Special Adviser on gender issues. She said women remain largely invisible, their voices unheard in the corridors of power. Only 16.3% of the world's parliaments were female a decade ago. In the context of Dominica's parliament Mayanja's statement resonates and should be an embarrassment to our society. But it isn't. We seem to take for granted that the number of women seeking political office in Dominica had dwindled significantly over the years. And that is in spite of the fact that Dominican women have been dominating education, health, agriculture, law and most critically, the growth and development of the family – the foundation of society.

The Sun, in an article published just prior to the May 2005 general elections, revealed that there was a steep drop in the number of women seeking political office in the past 15 years. Since 1990 the number of women offering themselves as candidates fell by 70 per cent. In 1990, ten years after Dominicans elected Dame Mary Eugenia Charles as the Caribbean's first female prime minister and the second woman ruler in the world, one in every six candidates in the general election was a woman. Of the ten female political candidates three were elected – Dame Eugenia Charles, Doreen Paul and Gertrude Roberts. In the 1995 general election three women were also elected – Paul, Roberts and Vernice Bellony.

But in 2000 there were only six female candidates, a 33% drop from the previous election. Only Roberts and Loreen Bannis-Roberts were successful at the polls. Only three women won elections in the 2014 general election for the ruling Dominica Labour Party-none for the opposition United Workers Party. Including Speaker of the House Alix Boyd- Knights, there are now seven female members in the 30-member Parliament – a paltry 23 percent.

Why are women breaking the glass ceiling in all professions except in political leadership? According to Carmen Hutchinson Miller in "Stereotyping Women's Political Leadership" published in "Enjoying Power: Eugenia Charles and Political Leadership in the Commonwealth Caribbean" edited by Eudine Barriteau and Alan Cobley, "many women who are active political members are not encouraged to run for political leadership for fear of the attacks they might receive from the opposition and the public in general." Miller said the extreme vileness on the political platform is reserved for women whereas men can virtually get away with all sorts of crimes.

That's why Dominican women should seriously consider the theme for International Women's Day 2019 as it applies to political representation: "Think equal, build smart, innovate for change".