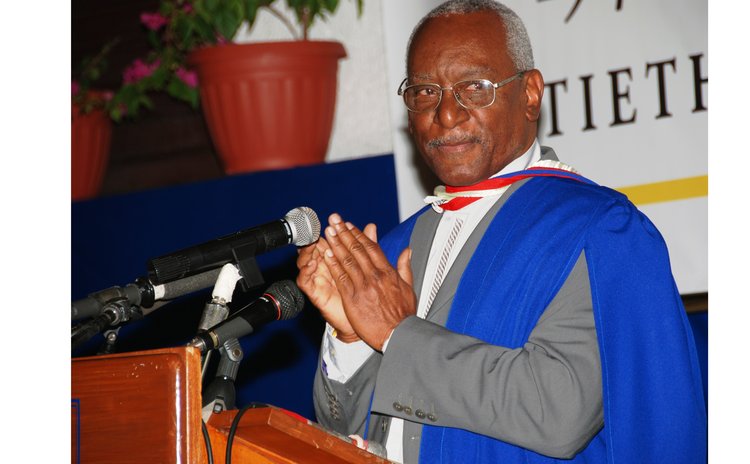 Eddie Lambert at a UWI graduation in 2008

Ambassador Lambert did so at a short ceremony at the Clementine Hall of the Apostolic Palace in theVatican (the Holy See) in mid-December 2014, the Government Press Attaché reported.

Ambassador Lambert described his appoint as a privilege and an honour to continue service to Dominica.

"It was a privilege and an eye opening experience to meet not only with the Holy Father Pope Francis but also the Secretary of State and the other officers of the Holy See. I have come to the realization that a number of social issues on the church's agenda such as tackling unemployment, stewardship of the environment and caring for the disadvantaged and disposed connect with and areissues on the agenda of the Government of Dominica," Ambassador Lambert stated.

"I warmly welcome you and hope that every time you enter this house that you feel at home. I extend our welcome and respect for you and for your people and the heads of your government. I greet you and wish your work to be fruitful, to be fertile. The work of an ambassador lies in small steps, smallthings, but they always end up making peace, bringing closer the hearts of people, sowing brotherhood among peoples. This is your job, but with little things, tiny things," Pope Francis stated.

Dominica and the Holy See established diplomatic relations in 1982.