Dominica's diaspora is missing in action in our country's development 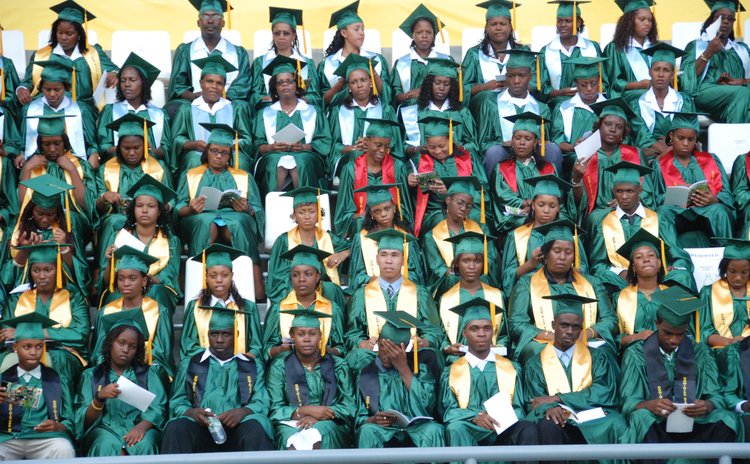 Class of 2008 of the Dominica State College : How many have migrated?

During the many graduation ceremonies of secondary schools that ended last week, students listened to well-meaning advice from keynote speakers on the value of a sound education; they were also encouraged to give back to the country that invested so much in their education.

But few speakers at these graduation ceremonies addressed the fact that only a small percentage of the graduates will get the opportunity to enter the job market and remain in Dominica to contribute to nation-building. It is likely that these graduates will leave our shores in droves with the hope of earning a better living for themselves. And who can blame them?

During the past 30 years, Dominica has invested hundreds of millions of dollars in education but countries such as the United States of America, Canada and others seem to be the ultimate beneficiaries of this investment. In other words, while we export our wealth-creating assets to these countries we struggle under extremely difficult circumstances to develop our country. The mass migration of our people stunts development because educated persons are most likely to migrate; they are also the nationals with the capacity to create jobs for others, form the nucleus of our organisations and institutions and pay taxes to the government. These taxes keep the social security system active and help meet the cost of the welfare programmes of the State. As a result of Dominica's dwindling working population, the Social Security system has been experiencing much difficulty in staying afloat. If this trend continues, the Dominica Social Security could collapse.

Fortunately, the migration of the labour force is not a Dominican or even a Caribbean phenomenon. Many countries especially in Asia and Latin America have been adversely affected by the outward flow of their potentially productive nationals. So it makes sense that if we need to find solutions to our problem, we should be able to draw on the experiences of other countries. In Guyana more than 70 percent of the population with tertiary education has moved to the United States. The impact of this on the development of Guyana is well-known to the rest of the Caribbean and Dominica's situation is as bad, if not worse.

Dr. Thomson Fontaine, a Dominican economist, estimates that over the past 30 years Dominica has lost "an astonishing 50,000 of its finest sons and daughters" to places such as the United States, Europe, the French Antilles, St. Marten and elsewhere around the world. Additionally, the World Bank states that a decade ago there were 42,723 Dominicans living in other countries; that was more than half, specifically 54.1%, of the population at that time.

One of the most frequent recommendations is for the country to actively engage organisations in the Diaspora who are eager to assist in the development of their country. Dr. Fontaine in particular has been urging Dominican governments to more effectively utilize the vast human and financial resources available in the Diaspora to help reverse the negative impact of migration. Some years ago the Roosevelt Skerrit Administration took the positive step of creating a department with special responsibility for the Diaspora but we are not convinced that that institution has had much impact in utilizing the vast potential of the Diaspora. We are not sure that government even tries to exploit that rich potential; beyond engaging in that disputed action of transporting Dominicans to come home to vote for the ruling party.

But while highly educated workers are essential for the development of any country, developed countries are sucking engineers, doctors, nurses, teachers and the educated work force out of Dominica. The process continues every year especially during the period immediately following the schools' graduation ceremonies.

In a paper he titled "Tracing the Diaspora's Involvement in the Development of Nation: the Case of Dominica", Dr. Fontaine states that the majority of the migrants from Dominica are skilled or recent graduates of the country's schools. Dominica, he says, has lost 80 percent of its labour force with a secondary education and over 95 percent with tertiary education.

It is therefore rather elementary that Government must not merely educate its citizens but it must also create policies, plans and programmes to keep its trained and educated nationals at home. Admittedly, that may be easy to say but extremely difficult to implement, given the phenomenon of globalization and the pathetic state of Dominica's economy. But the country has no excuse for its apparent lukewarm attitude towards actively engaging its Diaspora in every sphere of the country's development.

Government must therefore make every effort to exploit Dominican's natural desire to participate in their country's development by harnessing diaspora resources of capital, talent and skills.

But before we do that we must seriously address issues such as accountability, transparency and good governance as well as crime and the inefficient justice system. Don't expect Dominicans in the diaspora to invest their time and money here in Dominica when we treat these issues with such flippant disregard.