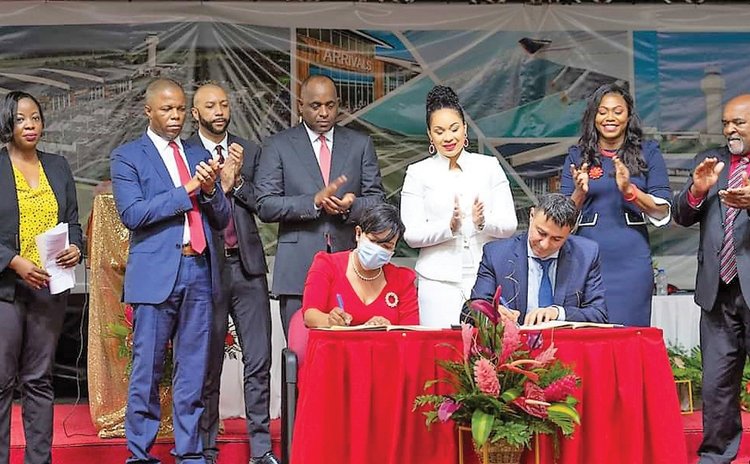 Signing of the airport contract with Anthony Haiden

At the end of a year crippled by the ongoing coronavirus pandemic, the International Monetary Fund (IMF) predicted that Dominica's economy would have "shown a modest recovery of 3.7 percent in 2021" after contracting by 11 percent in 2020.

But that IMF-predicted growth is largely due to the sale of passports under the country's Citizenship by Investment Programme (CBI).

Passports sale is also expected to finance the construction of Dominica's first international airport in Wesley. Amidst calls for transparency, and in the presence of his ministers, state dignitaries and riled up supporters, and the general public, Prime Minister Roosevelt Skerrit and Chief Executive Officer of Montreal Management Consultants Est. (MMCE) Anthony Haiden, on 9 June 2021 signed a billion-dollar contract for the building of the airport.

In the future, an international airport will undoubtedly have an impact on the economy but the increase in the cost of goods and services had an immediate upward track when in September the government increased workers minimum wage. The last increase in the minimum wage was in 2007. For workers and labourers in the agricultural sector, for example, rates increased from $4.00 to $7.50 per hour.

As expected the economy suffered from the suspension of the inter-island ferry but following a 20-month absence due to the COVID 19 pandemic, Dominicans welcomed the announcement of the resumption of ferry services effective November 15, 2021. Services were expected to resume on a phased basis in the first instance only allowing 50 persons were to disembark in Dominica per trip.

Meanwhile, cruise tourism returned here on 27 July 2021 amidst fears of the spread of Covid-19.

The tourism sector badly needed that injection. In its Caribbean tourism performance report, the Barbados-based Caribbean Tourism Organization revealed that tourist arrivals to Dominica fell by a crippling 75.7 percent in 2020 when compared to 2019, with only 21,733 tourists visiting the island during the 12-month period.

Nonetheless, the government of Dominica presented its budget for the Fiscal Year 2021/22 on 28th July 2021 in the amount of $993.6 million from the Consolidated Fund. Of this amount, $438.9 million was allocated to the Government's Public Sector Investment Programme. The development of the International Airport featured as the single most prominent project, with an estimated expenditure of $75 million.

During the year, there was a relentless call by all sectors for government to grant a stimulus package because of Covid-19 restrictions but the government did not budge.

On April 12, 2021, several bus drivers gathered in Massacre and embarked on a "go-slow" protest action moving at about 1 km/h which resulted in a backup of traffic for many hours, Prime Minister Skerrit said the action was unjustified and politically motivated.