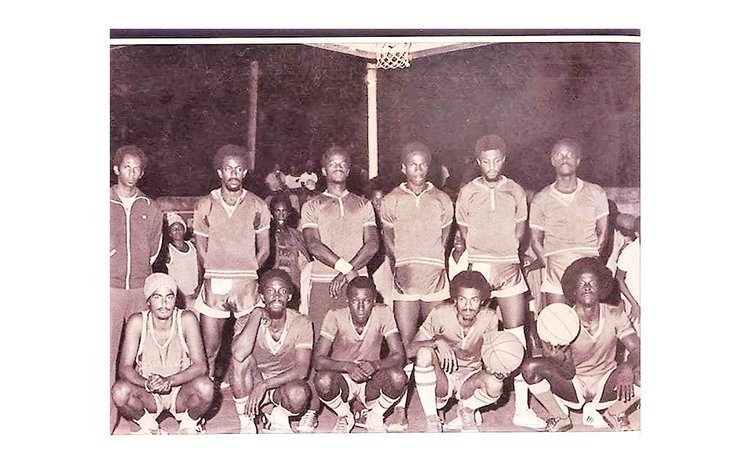 Emanuel "Lobie" Loblack: Lobie, who received a Meritorious Service Award in 2018 for his contribution to sports development, represented Dominica in three sports and played with five teams in DABA's 'National' League.

Lobie debuted in basketball with Panthers (Junior Division) in 1972. The following year, 1973, he entered the league's top division with St. Mary's Academy Sharks. In 1975 he played with Zodiacs; in 1976, Strikers; and lastly with Harks, possibly from 1977 through 1985.

Lobie was selected to Dominica's State Basketball Team in 1973 and also represented Dominica in the 2nd Windward Islands Basketball Tournament in 1976.

Two of Lobie's other passions are Athletics and Karate in which he proudly represented Sisserou Land on several occasions. He has since retired but continues to coach national Track & Field athletes.

He captained Atoms from 1967 through 1970 and helped power his team to a thrilling championship victory over Citylites in 1968. This is a memorable game because it was the first ever to be played here at night, under hastily installed flood lights (in tin cans) suspended above the court from wires strung from the Brothers' residence to St. Gerard's Hall.

McFord was a member of Dominica's first Island Basketball Team (1967) when they engaged Barbados' 7-Up Giants. In 1968, he was part of the Dominica team which played a friendly game against a touring Washington University team from Washington D.C., and in 1969 he toured Guadeloupe, Barbados and the Leeward Islands with Dominica's Team.

Wearing his other national cap, McFord represented Dominica (1968– 1970), Windward Islands (1969-1970) and Combined Islands (1970) with distinction as a cricketer, and was legendary with his quick reaction, grabbing many a catch while fielding in the Forward Short-leg position. Back in his day no one wore helmets while fielding. McFord was inducted into the Dominica Cricket Hall of Fame in 1988 for his outstanding contribution to the sport, and was selected in 1994 to Reginald St. Havis Shillingford's All-Time Best Dominica Cricket Team.

Oliver "O'grell" Grell: O'Grell is another distinguished Dominican sportsman who represented the country in two sports. He first played basketball with St. Mary's Academy in the formative years of the national league, from 1966 through 1969, and later with Raiders in 1975. Like his former schoolmate and teammate McFord, O'Grell only played in the league's top division and assisted SMA capture the first Basketball Knockout Championship in the local league.

Oliver first donned his national basketball uniform while still attending secondary school in 1969, for a very successful tour of St. Kitts that year. Six years later he was part of Dominica's National Team that participated in the first Windward Islands Basketball Tournament in St. Lucia in 1975.

Playing with a different type of boots, O'Grell also represented Dominica in football.

Michael "Bòbèt" Freeman: Bòbèt played basketball with three teams in the national league. In 1969, while with St. Mary's Academy Gales in Division II, he received the Most Promising New Player Award. He was a member of Raiders in 1973, and a regular high-scorer on Ball Wizards in 1977.

Freeman represented Dominica in basketball in 1973, and also wore the State's national colours in football.

Trevor "Hola" Knight: Hola debuted in the national league with Dominica Grammar School in the senior division (1972-1974), and helped DGS hand Cardinals their second defeat in the Cards' six seasons to that point (1973). Two years later he was drafted by Cardinals and played with them in 1975 and 1976. The team then re-named to Cougars (1977, 1978), later reverting to Cardinals. Trevor played with Cougars then continued briefly with Cardinals from 1979 after they returned to their original name.

Out on the football field Hola was Dominica's National Youth Football Team's goalkeeper in 1974 and later went on to goal-keep on Kensborough United.