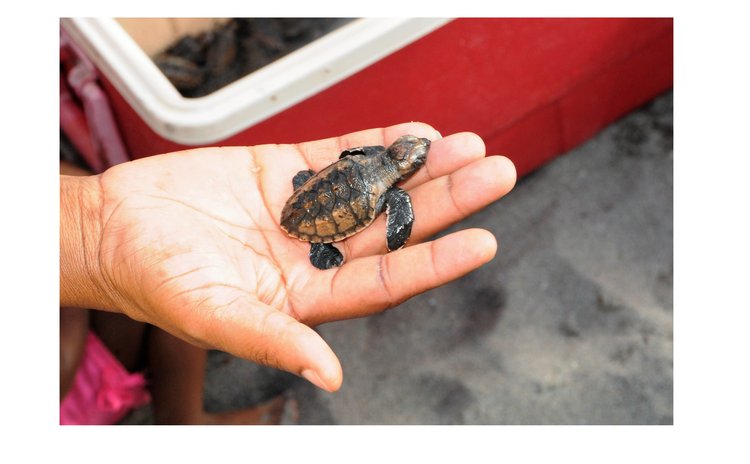 A turtle in the hand is worth two in the ocean? Not really

On a quiet, overcast Sunday afternoon an ample group gathers on a black sand beach on the east coast.

The waves from the Atlantic Ocean crash in the background, cushioning the anticipation of the curious crowd.

The onlookers stare on eagerly as one man digs the sand with his bare hands, hoping to share some good news.

Sad to say, there is a collective sigh of disappointment when it is announced: none survived.

The beach? Rosalie. The site? A hatchery for the leatherback turtle. The non-survivors? Baby leatherbacks.

The last hatching for this magnificent turtle was earlier this month as the season for laying and hatching of eggs runs from March to July.

In Dominica, a dedicated group of people tries their utmost to ensure the young ones make it to the ocean. The Nature Enhancement Team (NET) has been working here since 2006.

For this leatherback season, there were 14 nests from which more than half were successfully excavated.

But why is it that turtles in this nest didn't stand a chance? "Because of Hurricane Elsa" declared Judith Joyce, a Nature Enhancement Team (NET) volunteer, who goes by the name Judy. "She killed the last two nests and ruined this one too."

What happened is Hurricane Elsa brought with her a lot of seaweed, sand, and water which went way over the hatchery. As a result, there was more than a foot of sargassum. This in turn drowned and suffocated the nests.

A leatherback lays approximately 100 eggs when it makes is way onshore. When Judy spoke to The Sun she disclosed that there were 21 yoke-less eggs and 74 with yokes. The yoke-less eggs are laid as a decoy for natural predators. Imagine losing all these eggs? That's quite the blow to the leatherback population.

Over the years it has been made clear that man is the greatest threat to the turtle's survival. There is the direct threat of those who lie in wait on the beach to capture and kill these impressive animals. There is also the indirect threat by the construction of infrastructure which leads to the destruction of habitats. Not to mention pollution and overfishing. Though, it was the weather that did the job this time.

But this time, could the death of the turtles be blamed on climate change? Simon George, affectionately known as the turtle whisperer, who also works with NET has an interesting take on the matter.

"That brings us back to humans, you know," he said. "It is our action that really contributed to climate change. So that's indirectly, but it is our overall action."

Dominica is home to three species of turtles, leatherback, hawksbill, and green. They are being described as keystone species due to their role in maintaining balance in the ecosystem.

"The leatherback feeds on jellyfish, jellyfish eat fish," George said. "The hawksbill is the ones out there they feed on sponges, they take care of the coral. The green turtle takes care of the vegetation in the ocean, they feed on seaweed and seagrasses," he said.

NET has been hard at work to spread awareness on the importance of protecting the turtles which come to lay in Dominica and has seen sensitization grow among the public. However, Judy and Simon admit there is a long way to go to make a significant impact in the protection of turtles.

"Just being aware of the value, how lucky we are to have three species nest on our beaches," Simon told The SUN.

Judy, on the other hand, would like to see an investment by the government towards the sustainability of this project.

"I would love to see us be sustainable but we are not putting in full time," she said. "If the government saw the worth of doing turtle work at NET we would pay NET workers to help get it advertised, help get it out."

There have been grants from various institutions over the years but true sustainability is what is needed to help protect and preserve these rare species.