Dominica's Mountain Chicken: It's Not Too Late to Save Them 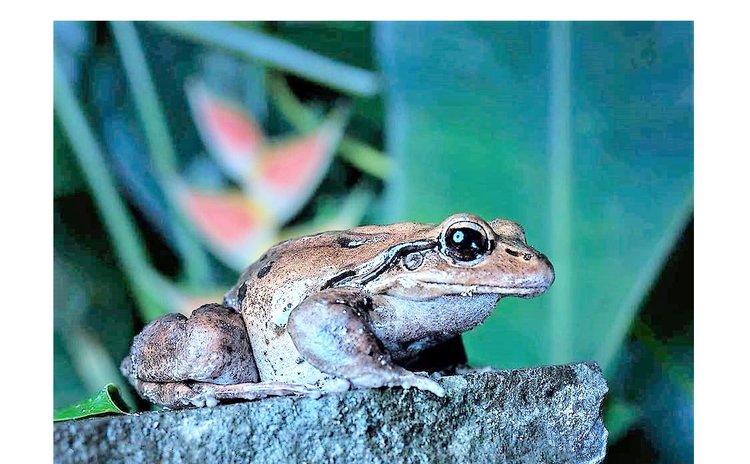 A plea to the public to help restore the diminishing population of the country's once renowned mountain chicken or crapaud as it is commonly called.

This amphibian holds a prestigious place in Dominica's culture, from the Coat of Arms to traditional songs, to at one point being the official national dish.

Many recall the distinctive croak of the animal, especially on a rainy night. Seeing the creatures in abundance and even holding the slippery animal firmly between clasped hands was the norm.

Unfortunately, the mountain chicken population was dealt a devastating blow by the Chytrid fungus in 2002. By 2004 this fungus reduced the population by 80% causing it to become a critically endangered species.

Despite what seems to be a dire prognosis, the Division of Forestry, Wildlife, and Parks is committed to restoring the crapaud population.

It has been almost 20 years since the decline of the amphibian's numbers, but Assistant Forest Officer (temporary) in the Forestry Division Jeanelle Brisbane, told The Sun the scientific study, launched in January 2020, to determine the accurate number of these animals in the wild is helpful.

"We are still undergoing our Mountain Chicken frog population study which has accumulated over a year of research data. Based on our findings thus far, we believe that there are less than 100 individuals remaining in the wild in Dominica," she said.

Brisbane says this low figure raises many concerns with the Forestry Division over the crapaud population.

"The issue with the Mountain Chicken frog having this small population is that these frogs are scattered across various locations in Dominica and are isolated from one another. That means that one population can have as little as 10 frogs, which is very concerning as a natural disaster or unsustainable development can significantly impact this species survival," Brisbane said.

She says it is imperative Dominicans take the necessary steps to conserve wildlife by reducing the environmental impact and preserving the integrity of the country's natural systems.

This is of utmost importance as Dominica is the only island where the crapaud can be found in the wild. Montserrat used to be in this elite group but the last sighting of its mountain chicken in the wild was in 2017.

Currently, Montserrat has a breeding programme with over 20 frogs in captivity.

"Dominica is the last island with a wild population of this species that has played a significant role in shaping our culture, traditions, and our livelihoods. It is our responsibility as stewards of the Nature Island to protect our natural resources that protect us," Brisbane said. Fortunately, the COVI-19 restrictions have not hindered conducting the Frog Population study.

"This is because of the nature of our work being outdoors with very little human interaction. Though it has influenced where we can and cannot go, we need to understand that these animals and their threats do not wait on us so, while taking all precautions to remain safe, our work must go on," she said.

Brisbane emphasized the need for Dominicans to play their part in protecting the Mountain Chicken population so this amphibian may be restored to its status in Dominican culture.

"The Mountain Chicken frog is at the heart of every Dominican from our Coat of Arms to our folklore. It has played a vital role in securing our livelihoods from being a free, effective, natural pest control for farmers to providing many with an income," said Brisbane. "Sadly, a fungus was introduced into Dominica that brought them to the brink of extinction. It is up to us, then, as stewards of the Nature Island, to protect them before it is too late by reducing our chemical and waste pollution, preserving our natural habitats, spreading awareness on the species status and the importance of protecting the frog, and respecting them as Dominicans too."