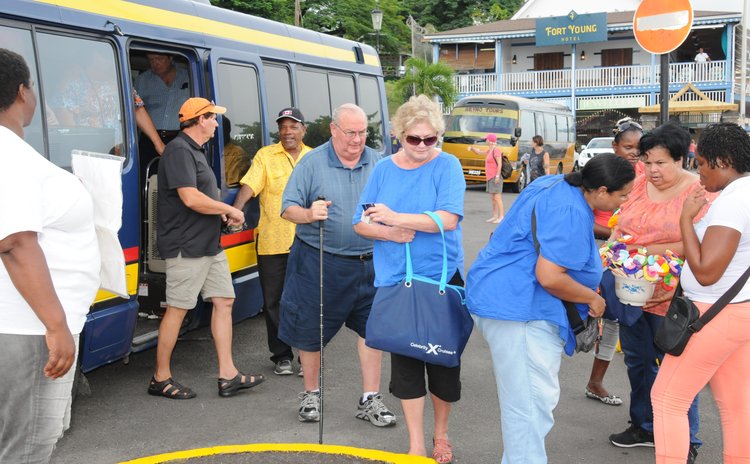 Delivering quality service to visitors will be the focus of the 2016/2017 cruise season which officially opened today at the Roseau Cruise Ship Berth with the docking of the MV Celebrity Summit of Celebrity Cruises.

That was the highlight of a speech from Benoit Bardouille, Manager of Dominica Air and Sea Port Authority (DASPA) to the press this morning as steel pan played in the background to welcome the cruise visitors.

Bardouille said: "As you know we are scored and there is a competitive table with the other territories."

He added that for the past six to seven months leading up to the opening of the season the Ministry of Tourism and Urban Renewal held trainings and meetings in order to solve the problems of past seasons.

"There are lot of issues that we are trying to correct, that of transportation in terms of ensuring that a tour guide goes on every vehicle that carry more than four passengers because based on the last ratings we had the best ratings when tours had tour guides, we got a score of 8.5 out of 10," he said.

He added that the infrastructure of the ports was also improved to ensure that the facilities were acceptable to the visitors.

Meanwhile, Head of Product Development at Discover Dominica Authority (DDA) Kathleen Jno-Jules said that for this season DDA has ensured that that all stakeholders are prepared to play their part.

Jno-Jules noted that this year they have partnered with three preschools to aid in the welcoming of the visitors.

"We have gotten the pre-schoolers involved; we understood that some islands do that and is not that we are copying but we think that it quite effective. There is something about children that really do impact visitors and their experience especially when they are dressed up in their uniform, so we think that made a difference," said Jno Jules.

She said throughout the day the visitors were entertained by a series of cultural performances.

Furthermore, she noted that DDA has ensured that there are trained tour guides placed on each tour bus.

Jno Jules said that work has been done to improve the accessibility to the various sites. However, work is still ongoing in Wotton Waven which was damaged by Tropical Storms Erika and Matthew.

Dominica will receive nine new ships and a total of 171 cruise calls during the season.