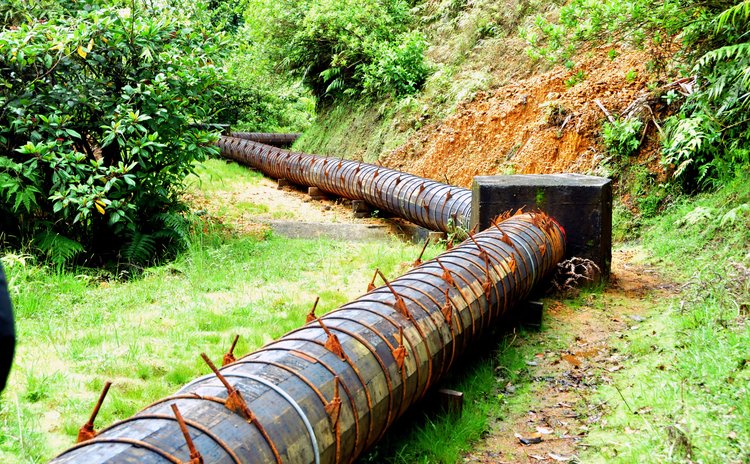 DOMLEC lines in the Roseau Valley

Approximately $2 million will be spent by the Dominica Electrical Services (DOMLEC) in repairs to the PADU Power Plant, the company has stated.

The plant was severely damage during the passage of Tropical Storm Erika in August 2015.

Generation Manager of DOMLEC David Stamp made these statements on May 12, while serving as tour guide to members of the press when they visited the company's hydro plants in Laudat and Trafalgar.

"As we indicated before the restoration and works at this station and along the roadway will be running in the $2 million EC range…We have completed the tendering process and we are making our final selection of the successful bidders", said Stamp.

He noted that the tendering process is to be completed within the next two or three weeks; work should begin by June.
Stamp said that DOMLEC is pushing to complete this project before the end of the year.

But he predicted that if another storm like Tropical Storm Erika occurred the current structure and intake diversions would be lost.

Hence, it would cause a loss to the output of the PADU Power Plant and this would severely affect its production.

"No temporary work has been done in that area…It's just difficult to do temporary works here; we have done some temporary works along the roadway because that was easier to access; which is one of the reasons why we have expedited the process of tendering this so we can get works started," Stamp said.

He noted that this area has been a major focus for the company and will most likely be one of the first places for which a contract will be awarded due to the lack of temporary fixes.

Stamp stated that hydroelectricity is beneficial to DOMLEC and their customers.

He noted that the more hydro power DOMLEC produced the fewer diesels the company would have to use.

DOMLEC has no control over the price of diesel; however, as long as there is water DOMLEC can limit the amount of diesel by maximizing hydro.

He said that although there was an abundance of water during Erika the island suffered a drought afterwards.

"We had a period of drought after Erika and the Clarks River system was down and the lake was not being replenished fast enough so we had to run a lot of diesel," he said.