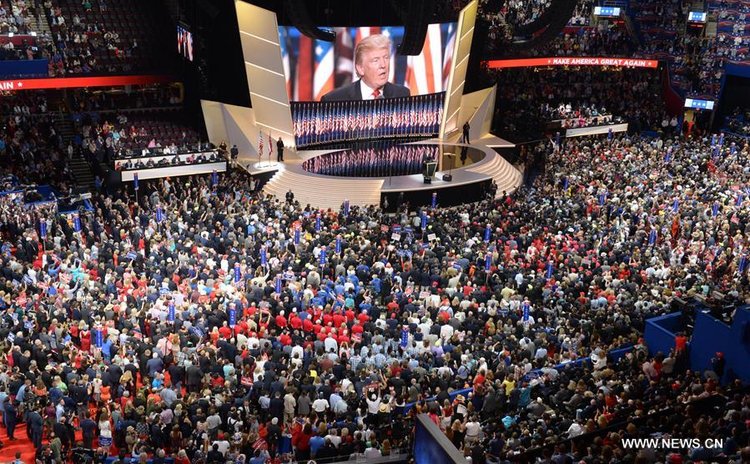 Donald Trump takes the stage on the last day of the Republican National Convention in Cleveland, Ohio, the United States, July 21, 2016.

It was the biggest night so far for the New York real estate mogul's campaign and final night of the 2016 Republican National Convention held at the Quicken Loans Arena in downtown Cleveland in the U.S. State of Ohio.

Trump made his entrance in patriotic music and a crowd chanting "Trump, Trump," after his eldest daughter, Ivanka, introduced him.

"When you have my father in your corner, you will never again have to worry about being let down," Ivanka Trump told the American people in her speech.

Trump formally accepted the party's presidential nomination, saying "I humbly and gratefully accept your nomination for the presidency of the United States."

The theme of the night was "Make America One Again," but Trump would have to first try to unite the divided party for a chance of winning in the coming general election.

In a heavily scripted speech, Trump covered issues including law and order, national security, immigration, trade, tax-cuts and the threat of terrorism. He then proclaimed that "I am your voice" to the American people.

Trump also launched a series of attacks on his opponent Democratic Party Nominee Hillary Clinton, accusing her of keeping "our rigged system in place" and leaving "death, destruction and weakness" as her legacy.

Trump's speech was consistant with the theme of many of his previous speeches, where he painted the current state of the country as bleak, dangerous and constantly under attack, things only he as president can fix.

But he once again failed to provide any detailed policies to explain how he would manage to achieve his aims.

There were also notably different talking points from previous speeches and prior contenders for the nomination, including protecting the LGBT (lesbian, gay, bisexual, and transgender) community and little mention of his faith and religious beliefs.

The speech marked the end of the bumpy convention and the start of the uphill battle for the 270 electoral votes he needs in November.

In the four-day event, anti-Trump fractions in the party tried to change convention rules to undermine his nomination, and Trump's wife Melania was accused of plagiarizing in her speech. On Wednesday, Texas Senator and former rival Ted Cruz publicly refused to endorse Trump, a move some newspapers deemed a "civil war."