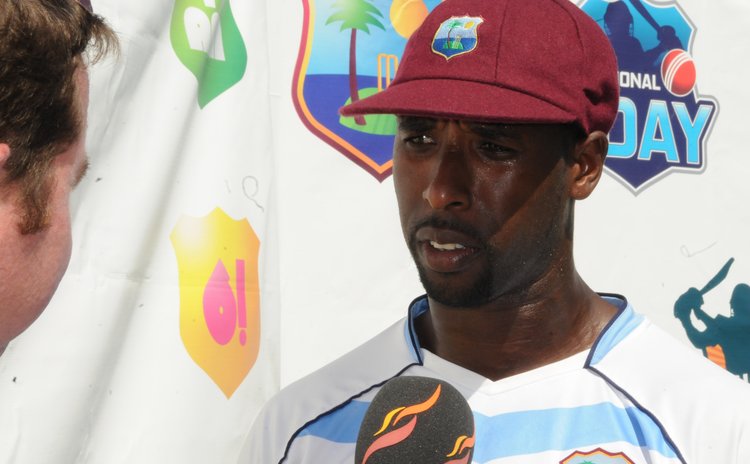 Shane Shillingford is being interviewed at the Windsor Park

If numbers don't lie, Shane Shillingford is the best bowler Dominica ever produced.

No one else from the 'Nature Isle' can match his 70 wickets in 16 test matches with six 'five-fors' and two ten-wicket hauls. And he is not done yet.

Since he hasn't played test cricket for nearly three years, some say Shane is down right now. Maybe; but don't count him out.

When Shane shot to international cricket stardom in 2012, it was a personal triumph for him. This was not because he caused Australian wickets to topple repeatedly and took 10 wickets in the game, becoming the first West Indian to take 10 wickets in a Test since Lance Gibbs in 1966.

It was because this performance silenced a legion of naysayers who questioned his bowling action and refused to admit that he had genuine bowling skills to defeat the best batsmen in the world.

After all, his victims included Ricky Ponting and David Warner, plus Michael Clarke and Michael Hussey twice — all of whom were ranked as top-5 batsmen in the world during their careers.

Shane toiled in the nets to remedy it and his performance at home against the mighty Australians proved that his hard work hard paid off and he had bounced back with a remodeled action.

He continued this good form when against Zimbabwe and India in 2013, but he was subsequently suspended from bowling for a second time for an illegal bowling action.

After remedial work, Shane corrected his bowling action again, but struggled against New Zealand in 2014. Since then he has not been selected to play for WI despite consistent good performances.

Today, Shane says getting back in the WI team is not his main aim. Instead he is focused on enjoying what could be his last days of cricket.

"I don't think I have long again in the cricket . . . at the moment I am just enjoying playing," he said.

"Life for me is constantly changing and there is a different role that I want to take…to live an upright life . . . to please God," he explained.

Working without the expectation of a recall is a reflection of the way Shane has always approached the game.

"When I started playing I set no expectation. . . All that I have done . . . it's just stuff that has been happening.

He wants to contribute as much as possible to cricket, so he is working with young cricketers to help them become more consistent performers.

Shane also wants to help talented new players prepare for the challenges within the cricket system that could demoralize them.

"If you are not strong personally, the system can break you," he explained, "I have seen players who have come and could play but things did not go their way and they migrated,".

His philosophy is that avoiding challenges can lead to running for the rest of one's life. "Stick to it . . . know what you want in life and try to work despite the hardship," he urged.

Cricket taught him not to give up in the face of challenges, especially when he his bowling action was questioned.

"Whatever was happening to me … I never felt like giving up….I just saw it as something else to get over," he said.

He remarked, "People tell players 'achieve your dreams', but when you wake up . . . there is reality.

"You can dream all you like, but the reality is, you have to face the hard work behind the scenes."

Shane said one of his challenges in regional cricket is what he calls insularity.

"The way [selectors] go about selecting their teams, you often find we have good youngsters coming through where they should invest.

"One would always feel that they invest only in the big islands and we in the Windwards and Leewards have matching up youngsters who are even better . . .

"You have to prove [yourself ]over and over … it's a constant pressure . . . you come from the 'small islands', you have to be performing on top of what they do to remain in the team."

Asked about making his test debut with cricketing greats, Shane responded, "For me, it was just a continuation. I was playing first class cricket, I was bowling well at the time…"

He remembers being amazed that his teammate, Dwayne Bravo predicted his first test wicket exactly — Graham Smith caught by Bravo at slip!

For him, performing at home "was truly a great feeling . . . nothing hyped-up . . . it was pleasing to perform among villagers and Dominicans in general," he said.

Shane remarked that for him there is "no particular big match" as his preparation is "more or less mental".

He also realised that he had to be fit to play cricket rather than play cricket to get fit so he upped his fitness routine.

"That was the reason why I was able to bowl for long periods of time…being mentally and physically fit," he said.

Shane realised that he could not progress doing the same amount of work. "I wanted a different result; I had to put in something different."

Referring to changing his bowling action, Shane said the only negative for him was his not being on the team or playing while doing remedial work.

"For me it was just another hurdle. . . I believe that people go through things so they can relate to other people who might go through the same things."

While the WICB supported him, the Dominican Government was silent. "Nobody called me and said 'Shane, I hope this is going well, what can we do?'"

Shane thinks he can bounce back again and with his quiet, inner strength, we have absolutely no doubt that he will. By Gwen Evelyn