Don't just ask for bread, ask for Jericho's bread instead! 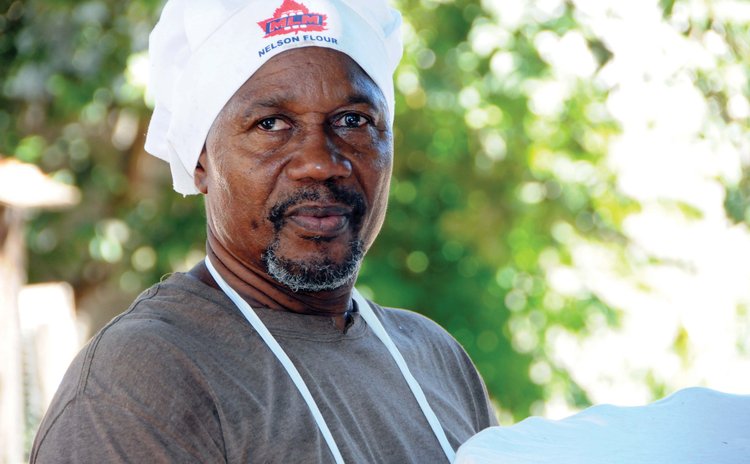 As you pass along Steber Street, in Pottersville, Goodwill, you smell the enticing scent of fresh bread emanating from this yard. It lures the curious passerby, causes him to salivate and conjure images of butter, cheese and cocoa tea.

Guess what? It's not just bread, its Jericho's bread, a 40-year institution in Dominica. As a pre- teen my mother, as did hundreds of others, sent me to buy bread there, and nowhere else, even if other bakeries may have been closer. The tradition continues.

Recently I was moved to speak to the famed 62-year old Davidson "Jericho" Benoit. The line was long, almost to the road, it was Saturday about 6.30 but no one moved. Some customers even tried 'beating the system' by passing money up front to others to purchase a "Jericho" before the next batch. The batches seem to go so quickly. It is a small concrete oven, fueled by wood, the original and natural way, a skill that Jericho has maintained for four decades while others have chosen the modern electric ovens which provide faster and more quantity but certainly not better quality. So the customers remain rooted in place as they while away the time with old talk and "beff".

For Davidson Benoit, father of four, it was not always bread making. He worked construction with Tommy Elie on the River Side apartments loading the mixer until someone noted his diligence, hard unceasing work and persistence. He also worked on the Port as a dedicated stevedore but he laments that Louis 'Zaboka' Benoit did not give him the opportunity to join the Waterfront and Allied Workers Union.

He got the name Jericho, he says, because he did odd chores for an old man called 'Jelico' who lived on Potter's Street. He was then taught how to knead and roll bread by Mrs. Doreen Romain (nee Green). He had already learnt the skill of mixing but he is ever grateful to her for his tutorship. In the early 80's, Edward Dublin, who owned a bakery paid a visit to the HMS at Stock Farm and left Jericho three bags of flour and asked him to hold the fort. Well, the rest is history and this fort is held up to this day.

With God's support and the help of his lifelong companion, Marian Moreau, he has not given up. Jericho had high praises for Mrs. Waddy Astaphan who he refers to as Ma Waddy. Without apology, he jokes that he is an Astaphan, citing how Ma Waddy has never given up on him.

"And you can write that," he beamed, while acknowledging "neither has the St. Aroment people and my Potterville neighbors."

"What's the secret?" I ask Jericho,

Surely his bread has a distinctive taste and many confess it's more filling and appetizing than most. He says he does it with love, consistency and uses no other butter than Glow Spread and, in rare cases, Blue Band. If he can't find those, then he don't think he will bake, because he does not use lard as some of his competitors do. He does everything with taste and excellence and surmises that the taste is in the mix, nothing else, no matter what people may speculate.

Interestingly Jericho has no interest in distributing his bread to other retailers because he started his business on this premise: to cater for the poor, small families who come to him with one, two or three dollars to buy bread for the home. In fact, he says, he is the only one who has maintained his small bread ("penny bread" as it is called); you can buy five for a dollar.

Jericho's bakery is a one-man effort with some assistance from Marian but normally he solicits help on weekends when he supplies mastiff bread and some whole wheat. However, it is the week-day mornings that customers flock to Jericho's between 6 and 7.30 am to get their bread in time for breakfast.

He believes in honesty and hard work and sometimes pays his helpers mid- way through the assigned chores.

Not even Tropical Storm Erika forced Jericho to slow down; he baked while he shoveled bucketing knee-high water from his bakery.

His motto: "What you doh like for yourself, doh do it to someone else."

What about his future? "Just to keep on doing what I am doing". He is satisfied.

Every Saturday, six hundred-pound bags of flour disappears in quick time. Jericho gives 'God all the glory.' He loves his location and the size of his 'family' bakery which he rents from Milton Green. Jericho's bread has been appreciated as far as the Cameroons in Africa, and he also explored his skills in St Croix for three months; the boss man, a friend, did not want him to return to Dominica.

Jericho's bread is a Dominican treasure, an institution, an art. In his spare time he indulges himself with television movies and news. But he will not forget the day it all started. He remains forever grateful to Martin Francis who gave him two bags of flour to start off. Now it has been 40 years and these walls of Jericho, cemented with Nelson flour, does not seem to be crumbling any time soon.