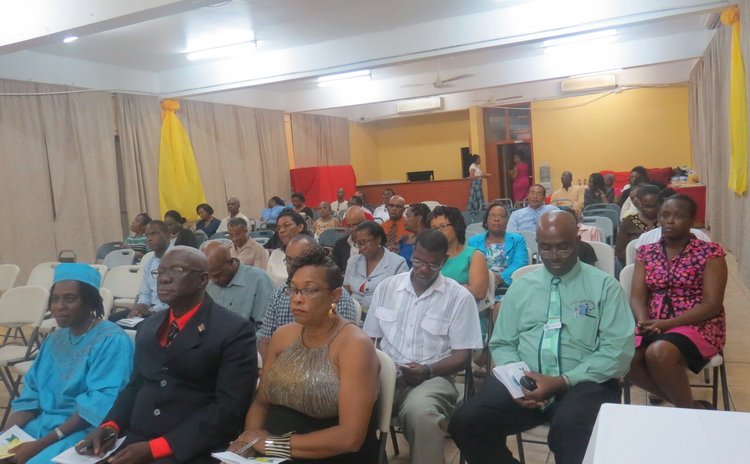 Attendees at the DPSU conference

Letang spoke at the DPSU's 8th Biennial Delegates Conference which began with an opening ceremony at the union's headquarters on May 4.

"Can we compare the sacrifices which were made by our forefathers and the pain and suffering which they endured and which still exist in many parts of the world even today to the little that is being asked of us to keep our struggle alive," Letang asked.

He noted that contract labour is quickly replacing full time employment and contractual workers are being denied most of the long term benefits and privileges of full time employees.

"Public services in many territories are being politicised with employment and promotion being determined by political affiliation and allegiance rather than merit and ability to do the work," he said.

Letang added that in some jurisdictions in the region the independence, integrity and impartiality of public service commissions also raise concern.

He said that workers must unite if they are to successfully crush illegal attempts which seek to deny them their constitutional right to join unions of their choice and fully participate in union activities.

Letang added that the lack of unity among unions is negatively affecting efforts at implementing changes to outdated laws.

"If we are too seriously engage ourselves in national progress and development we cannot sit selfishly by and not participate in campaigns against the abuse and exploitation of women and children," said Letang.

He added that union leaders, workers and members must accept the fact that they are first and foremost citizens of the country and hence have the right to object to corruption, victimization and injustice.

Meanwhile, General Secretary of the National Union of Government and Federative Workers, Sister Jullian Bartlet, called for the establishment of a Trade Union Congress in Dominica.

She said that for any trade union to survive there must be internal unity and that if the head of the union, the executive and the membership cannot share the same vision and effectively communicate that vision into unified action that union is doomed to only exist and will ultimately perish.

"There are five trade unions in Dominica, there is no trade union congress in this country although there have been many calls for one to be formed," said Bartlet.

She added that unions only represent less than 10% of the work force and trade unions in Dominica still have not effectively been able to rally and strengthen the unionized membership base of the workforce.

"Why is it difficult for each union to penetrate the workforce effectively? That could be remedied if these trade unions take a united approach and work cohesively," she said.

The conference was held under the theme: "Trade Union Unity: Consolidating for National Progress and Development."