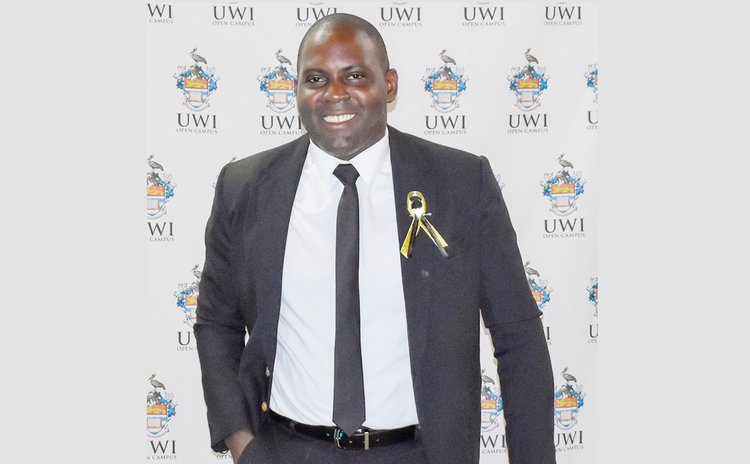 He once thought this was beyond people of his social and economic ilk; that only a privileged few could achieve this. However, after four long years of dedication and toil, son-of-Colihaut Barry Casimir is now Dr. Barry Casimir.

"There are no words that can express how I feel about getting a doctoral degree. Growing up you feel this is something that is not achievable," he told The Sun.

But then, Casimir, whose first job was as a clerical officer at the Dominica Social Security, was influenced by Dr Helen Seaman, the late registrar at the Dominica State College, and Dr Francis Severin, the director of the University of the West Indies (UWI) open campus here.

Seaman, in particular, appealed to Casimir's inner attraction to higher education, through her brilliance and elation upon completing her own doctoral degree. With the will, the desire and the encouragement to take on the challenge, he began the journey in 2015 and completed the programme last year. After months of waiting anxiously, Casimir finally received his completion letter last month.

"When I got the letter, it was jubilation … and you feel a sense of self-fulfilment. It also put a lot of confidence in my children who felt, 'wow, daddy is really smart'. It's like you achieve one for everybody. The phone calls, the texts, everyone from Colihaut started calling in. It was four years well spent. You learn so much. It was really worth it."

"The issue of equality in access into higher education is significant since it is concerned with a student's socio-economic status, the higher education institution's cost and family factors of the student," he wrote in the abstract.

Casimir, a programme officer at The UWI Open Campus, told The Sun his findings revealed that while there are more opportunities for people to access higher education, the number of people accessing these opportunities is quite low.

The application process, he said, is problematic and, in many cases, intimidating. He cited as an example, the limited response to scholarship opportunities provided to people of Kalinago descent by The University of the West Indies.

"So many people don't know about it or intimidated by the online application process; too many questions," Casimir said. "You also have the problem, some rural communities, they have difficulty accessing higher education."

However, the biggest problem is the socio-economic status of Dominicans, many of whom believe they would be better off engaging in unsavoury activities such as drug dealing.

"One person said there are lots of people with first and second degrees, but a drug dealer does a lot better than people with these degrees. You work hard to earn these degrees, but you have the loans, you can't build a house, can't buy a car, but a drug dealer . . . can do that. People ask themselves, what's the use of going into higher education? You do that and go back to square one."

"So someone coming from a low income background doesn't have much of a chance of accessing higher education," Casimir found.

He recommended that institutions of higher learning provide more bursaries and scholarships and reach out to communities to increase awareness, while government should help put better structures in place to assist low-income families.

Of equal importance, Casimir said, is the need to shift the focus of from mere academics to entrepreneurship.

"Things like coaching, you send somebody to a high school and you provide coaching, help with identifying programmes to become an accountant, or a lawyer, etc. You must train people from a young age so when they get to the point where they can access higher education, they already have the core," he said.