As the nation continues to mourn the passing of former President Dr. N. J. O. Liverpool the tributes pour in 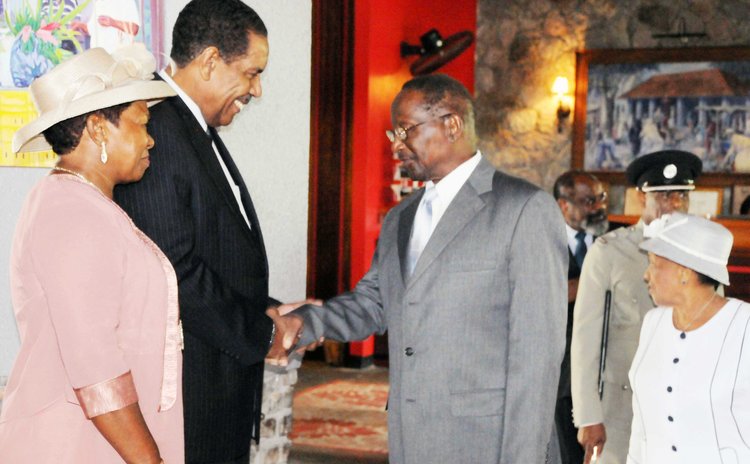 The funeral service of former President Dr. N. J. O Liverpool is to be held on Friday, June 19, 2015 at the Roman Catholic Church in Grandbay, Government officials said today at a meeting to plan press coverage of the service.

Having undergone an operation in the United States on Saturday, May 30th and having been sent home by his doctors to recuperate, Dr. Liverpool died two days later, on Monday June 1st 2015.

Dr. Liverpool's body was expected to arrive from the US today at the Douglas Charles Airport.

As the nation continues to mourn the passing of the former President, tributes to Dr. Liverpool continue to pour in for one of the most illustrious son-of-the soil and prominent Caribbean legal luminary. Here is a sample:

President of the Commonwealth of Dominica, His Excellency Charles Savarin:

"Dr Liverpool is a distinguished son of the soil; he has reached the height of his professional career as an attorney, a professor of law at the University of the West Indies, a judge and, of course, President of the Commonwealth of Dominica.

"We are saddened by his death; Dominicans at home and abroad… we all sympathise with Mrs. Liverpool and his children for whom this loss must be unbearable. But as a people of faith, we all put our trust in God and hope that He will strengthen the family to be able to cope with the loss."

"Death has robbed us of a most revered ambassador for and of this country…We recognized then, as we do now, that this was a Dominican of extraordinary talent and achievements; yet a humble gentleman who had a moment and a listening ear for everyone with whom he came into contact," Opposition United Workers Party (UWP):

"In a release issued by the Party today, June 2 it is describing the former President as a visionary and great citizen who has devoted his life and academic achievements to the service of humanity in his home land Dominica, the region and internationally.

"Dr. Liverpool can be described as an individual with a great sense of humility, very down to earth, dedicated and committed to family and country".

"Dr. Liverpool was a brilliant scholar epitomized by his attainment of the highest level in academia. A distinguished legal luminary whose career spanned over five decades, Dr. Liverpool exhibited a keen mind and an outstanding understanding for, and the application of the Law. He served with distinction at the Bar and on the Bench locally, regionally and internationally. Dr. Liverpool also served at the University of the West Indies Faculty of Law as Lecturer and Dean where he helped to mould young minds.

"Dr. Liverpool was soft spoken, humble, of calm disposition and yet assertive and brought clarity and quick resolution to matters referred to him. Young counsel found it easy to approach him and to obtain the pearls of wisdom which he dispensed with alacrity".

"This outstanding son of Dominica rose to his country's highest office and has earned the highest awards that could be bestowed by his country and by the Caribbean Community. This was the measure of the man who served Dominica and the region for more than 40 years.

"His indelible contribution to the field of law is inscribed not only in his publications, but also in the hundreds of students who passed under his tutelage at the University of the West Indies as both Lecturer and Dean. It is also enshrined in his judgements during his time on the bench in several jurisdictions across the Caribbean Community. The University of Ghana also benefitted from his expertise as a lecturer.

"This legal luminary did not confine his skills to that profession, as he also served as Dominica's Ambassador to the United States. Dr. Liverpool also found time to indulge in his passion for the cultural aspects of Dominican life as well as farming".