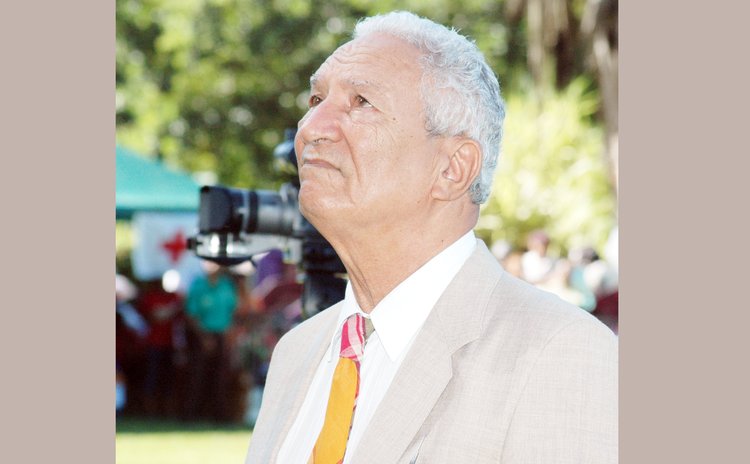 The Late Dr. Griffin at the 2005 Independence Awards Ceremony

Philip Norman Griffin was born to Dr. Charles Norman Griffin and Maria Fontaine (better known as Clarabel) in Petite Coulibrie, Bagatelle on 20th October,1926. He later moved to Grand Bay where he lived with his aunt while his mother worked in Roseau. He grew up in poor surroundings, but this did not deter him academically and he was a high achiever. A story he gave to me was that when he was eleven years old his mother called him to dress as he was going to "'stand" as godfather for the daughter of her friend. Victoria Fontaine, his goddaughter can testify to this.

On completing his primary schooling he gained admission to St Mary's Academy but soon left for the Dominica Grammar School. On graduating he became a Iab technician and got a scholarship to pursue lab technology in Trinidad in 1945. On his return, he was awarded a Nuffield Scholarship to study medicine at the University of Sheffield in England. There he met and married his first wife Mary in 1954. His first daughter Janet was born in November 1954, and he soon returned with his family as a doctor to Dominica.

He was sent to Grand Bay and was responsible for Grand Bay and all the hamlets stretching to Rosalie. He went there by horseback but told me his horse either bit or stomped on him so that was it for horses. He walked from then on! He had to sleep in police stations once away from Grand Bay. Dr. Dorian Shillingford replaced him in Grand Bay and he was sent to Roseau where he became the District Medical Officer. He became part of the "Big Four" doctors of Vincent A. Winston, Edward Watty, Desmond O. Mc Intyre, and Griffin. He also acted as Chief Medical Officer on occasions. By this time Linda, Leslie and Steven were added to his family. His district stretched from Pointe Michel to St Joseph. Princess Margaret Hospital opened in 1956.

Infant mortality was high in the 50s and 60s in Dominica and he was sent to England to do a diploma in pediatrics and his work in that field helped alleviate the problem here. In 1965 Dominica needed an anesthesiologist and together with his family, Philip went to Sheffield University to do that programme there. He was a popular and well-liked doctor and in emergencies even performed operations in the absence of Dr. McIntyre, the surgeon. He joined a group of doctors in the 1960s and built the Harlsboro Medical Center where he had a private practice alongside his hospital work.

The family moved to rent the large grey house at the corner of Constitution Hill and King George V St in 1959. He later built in Upper Goodwill in the mid-60s. The dread uprising in 1974/5 and the subsequent interruption in schooling resulted in Mary and the children moving to England in 1975. Sadly, the marriage ended in divorce in 1984. Hurricane David struck in 1979 and he had a lucky escape when a brick from the home roof fell and burst his head. Luckily he survived. He sold the house, moved to Reigate and he then married Dorothy Nicholls. They developed the Nicholls property at Bellevue Chopin and lived there till 2011 when they moved to the Nicholls home in Virgin Lane and built a cottage in the yard. He then moved to the downstairs apartment of his cousin Claudy in Castle Comfort. Sadly, both Dorothy and Mary died in 2012.

By now he had "retired" from his medical duties though he was always on hand to help out a friend. He loved agriculture and had an encyclopedic knowledge of Dominica's plants and fauna. He bought in 1966 a 30-acre plot of land from Rosalie Estate near Riviere Cyrique. He built a small house there and grew cloves, bay leaf, grapefruit, and anthuriums. He sold it after the destruction wrought by Hurricane David. He was also an amateur winemaker from local fruits.

Apart from his medical and agricultural ventures, he lived an active social life. He joined St. Georges Lodge in 1956. He was Chair of the Lodge on three occasions (1967,1986 and 2007) and was awarded Overseas Grand Rank in 1984 and became a Grand Officer in 2008. He remained a Lodge member till his passing. He was also President of the Red Cross on numerous occasions and also president of the Dominica Club and a member of the Golden Memories Club. He received an OBE in 1974 and a Sisserou Award in 2005. To crown all he acted as President of the Commonwealth of Dominica on some occasions.

He was a keen sportsman. He played cricket in his young days and was a member of the Roaring Forties. As a pace bowler, he once hit a batsman in the head and ended up stitching him up! He was an excellent pool and billiards player at the Dominica Club where he was also president. His sporting passion in his later life was the card game bridge. He learned it while on his medical studies in England in the 1940s and played in Dominica socially with players like Claude Bruney, Joffre Robinson, Augustus Emmanuel, etc. When a Bridge Association was formed he played for Jockeys in the local teams' competition. He played in the OECS Bridge Tournament and won several trophies in the pairs and teams competitions. He played with the new breed of bridge players (Foued lssa, Dr. Richard Green, Albert Astaphan, Henry Volney, etc.) and played up to a month before his passing. He was also President of the Association on some occasions.

In his last years, he was aided by a support system that included Patrick and Claudy Guiste and his bridge fraternity particularly Dr. Richard Green and his wife Lesley Ann. Miranda, his helper, also played her part. In May this year, he collapsed at his home and was taken to the Dominica China Friendship Hospital and later to a care home. He passed away on 8th July 2022 at the ripe age of 95.

Dr. Philip N. Griffin lived a full life. He was well loved by his patients and highly respected by his colleagues. He was a friendly and jovial person. According to his friend and colleague, Dr. W.E. V. Green, he was an "unsung hero". He will be sorely missed.

Much loved father to Janet, Linda, Leslie, and Steve, grandfather to Robert Tom, Matthew, and Isabel. Great grandfather to Logan. Friend, doctor, and a model Dominican. He lived a good life...

May he rest in eternal peace.

By Steve Griffin and Henry Volney