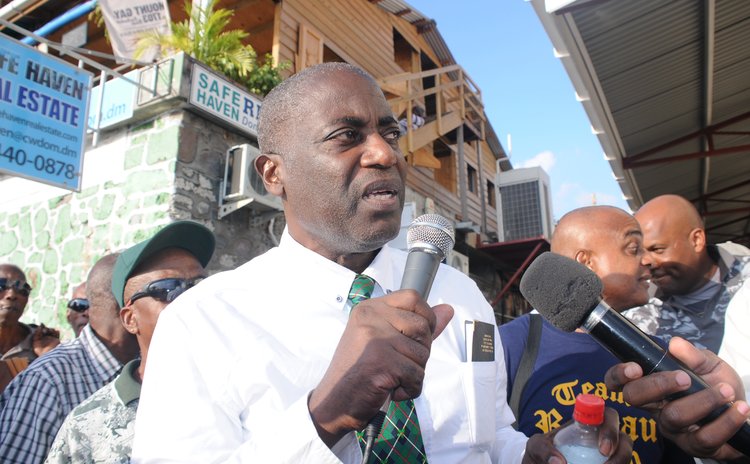 Five hours later, as Dr. Sam Christian was freed outside the magistrate's court on the Roseau Bay Front, they screamed noisily: "Skerrit must go! Skerrit must go!"

A couple hundred people had gathered on the narrow streets near the court, waiting for the release of Dr. Samuel "Sam" Christian who was arrested by members of the Criminal Investigations Department (CID) at his medical office on Bath Road, Roseau on the morning of February 2, 2017 as he began treating his patients.

As news spread about Dr. Christian's detention, members of the opposition United Workers Party (UWP) and also of the Dominica Freedom Party (DFP), of which Dr. Christian is a member, gathered outside police headquarters agitating and demanding his release with occasional chants.

Later Dr. Christian was charged with "inciting to commit arson".

According to the complaint, Dr. Christian "unlawfully incite to burn the down the Parliament of the Commonwealth of Dominica" at a public meeting held at Peebles Park, Goodwill in 2015.

Dr. Christian was granted bail in the sum of $20,000 with DFP stalwart, Annette St. Hilaire, standing as his surety. The Preliminary Inquiry is set for June 9, 2017. Dr. Christian is being represented by Attorney-at-law Joshua Francis and the law firm of Dyer & Dyer.

Speaking to the crowd outside the court house after his release, Dr. Christian said: "They will have to kill all of us. It's not about me; it's about the Dominican people. You cannot scare us…you cannot stifle the righteous outrage of the Dominican people. If you think that you are going to shut me up, then I have just begun to talk."

Meantime, opposition leader Lennox Linton who was present outside police headquarters while Dr. Christian was detained and also outside the court house, told the crowd to be ready for a massive demonstration.

"We have to get rid of this government. We will gather in Roseau on Tuesday February 7, 2017 in massive numbers in a peaceful demonstration. We will show them our forces, we will show them what we have and we will remove this corrupt government," Linton said.