Dr. Sam in the Spotlight

Protesting the proposed amendment to the House of Assembly (Elections) Act on Thursday and hit by a rock on Saturday, Dr. Sam Christian attracts national political attention 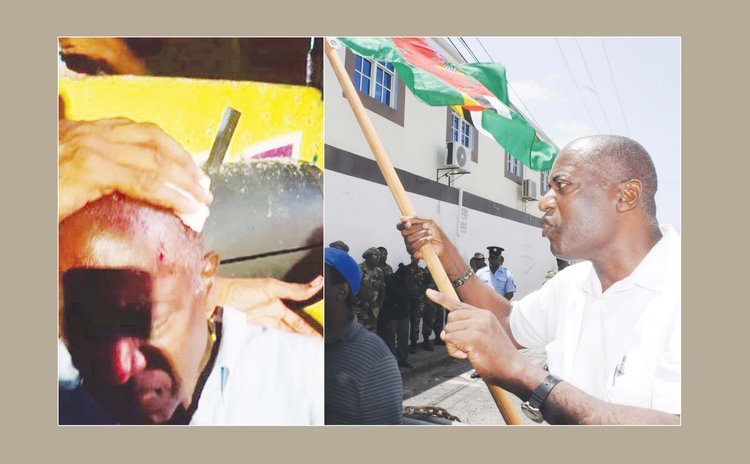 Right to left: Dr Sam Christian at protest and after he was hit by a stone at Soufriere

The mid-morning sun was mercilessly hot; the police presence suffocating; the protestors numbered a few dozen but they were loud and animated as if they wanted to make up for the few protestors.

That was the scene outside the House of Assembly last week Thursday when supporters of the United Workers Party (UWP) gathered to protest a Bill that would have amended the House of Assembly (Elections) Act and made it easier, some say illegally, for Dominicans in the diaspora to cast their votes.

Earlier the Government, through Attorney General Levi Peter, had announced that the debate on the Bill has been postponed.

Some protestors carried hastily-made cardboard placards that summarised their concern over the proposed amendment.

"Election free and fair and free from fear," read a man's poster.

"I live here. I work here. Give me my ID card," a woman's message stated.

"No peace without justice. No more overseas voters," another man had scribbled with a marker on a piece of cardboard.

A white-haired man made it clear that he wanted the government to: "Get off our backs. We are not donkey or monkey". That's the message he had written on a sheet of orange manila paper.

And a tall man, walking with a dog on a leach and with a double placard around his neck paraded around the crowd and occasionally taunted the police. The side of the placard along his back read: "Politics is too serious a matter to be left to politicians."

For an hour from 10.00 am the crowd stood relatively quietly about a hundred yards from the house of parliament, behind a metal barricade kept together with a large metal chain. About a dozen unarmed police officers dressed in military fatigue stood under the shade of a roof that hung over the street. About two hundred yards away, near the studios of State-owned DBS radio, were two large, green, imposing military vehicles, recently donated to the police by China.

Then two hours after the crowd had gathered, Dr. Sam Christian, the UWP election candidate for Soufriere, carrying a long pole to which was attached a large flag of Dominica, began speaking to the crowd near the metal barricade.

"Never underestimate the power of a small group of dedicated people," he shouted. "This is a glorious day for Dominica. I don't care what happen to me today, I am covered by the blood of the Lamb."

"We are going to do something that probably has not been done in a demonstration before," announced Dr. Christian as he gathered people around him to sing the national anthem.

"I want you to stand at attention," he said facing the police who looked on stoically but nervously.

But that would not be the last time Dominican would be hearing about Dr. Christian over the next few days. As he campaigned in Soufriere on Saturday a rock slammed into his skull bloodying his face. Dr. Sam's supporters blamed an unknown stone-thrower but surrogates of the ruling Dominica Labour Party said Dr. Christian was hit by a falling rock from a nearby construction site.