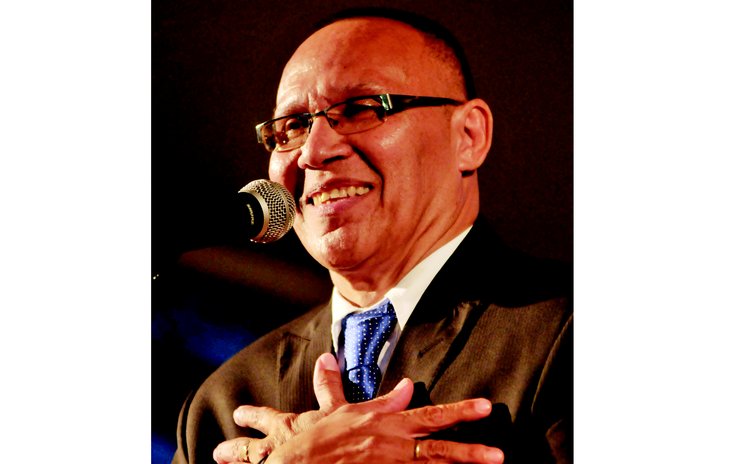 Dr Worrel Sanford at the UWP launch of candidates

The Opposition UWP needs a new candidate for the Salybia constituency after Dr. Worrell Sanford suddenly pulls out of the general election race

Three months after Dr. Worrell Sanford said "I do" he wants a separation, if not a complete divorce.

His bride, the Salybia constituency, the official general election name for the Kalinago Territory, is flabbergasted, anxiously awaiting an explanation.

"I will speak in support of Dr. Sanford and his decision only after he has spoken," opposition leader Lennox Linton and political leader of the United Workers Party (UWP) said.

The reasons for Dr. Sanford's withdrawal are unclear. UWP president Isaac Baptiste told DBS news on Monday that party leaders have no reason to believe Dr. Sanford has withdrawn although situations can arise that could cause any candidate to withdraw.

Earlier, Dr. Sanford apparently agonized about the decision to be the UWP candidate in the crucial Salybia constituency for the upcoming election.

"(I had) lots of thought and consideration and have decided to be the people's choice candidate on a UWP ticket," Dr. Sanford told The Sun in April 2019. "I repeatedly told the people that I would only accept if their request was sufficient in number I would stand up to it and not turn my back on them. I am satisfied that the numbers are tremendous and so here I am. We are going to win this seat, there is no doubt about that."

Dr. Sanford did not immediately respond to many phone calls and WhatsApp messages seeking comments on his decision.

But a close associate of the dermatologist and politician also confirmed the latest development and believed that Dr. Sanford's "unfortunate departure will not affect the party."

"He will be on the scene working with the new candidate who has the full blessings and support from the people of the people of the Kalinago Territory so that is not an issue at all. We will be giving Dr. Sanford the fullest support and respect his decision and continue to pray God's guidance on him and his family," the associate said.

Ask who would be Dr. Sanford's replacement, the source said: "You just wait. The party leader will be making a statement and announcement on the matter, I don't want to steal his thunder.

"All I will say to you is that, we (the UWP) have the Kalinago Territory well covered and we are set to win that seat in the upcoming general elections. Doctor and his team have done tremendous work in the area and his replacement will continue the good work in bringing home that seat."

Dr. Sanford is not unfamiliar with the political environment in the Kalinago Territory. In 2009 he contested and won the Salybia seat for the Dominica Labour Party (DLP) but resigned to pursue further medical studies.

Whoever is the new UWP candidate, he or she is expected to come up against Cozier Frederick of the DLP, a party that has won the seat for the last 15 years.

Recently, both the UWP and the ruling DLP have been having a rough time in selecting and keeping candidates. In May 2019, the UWP's Grand Bay constituency candidate, Noreen John died, suddenly. To date the party has not announced a replacement candidate for Grand Bay.

Meanwhile, the DLP returned to Dr. Kenneth Darroux, the Minister of Health and Parliamentary Representative for Petite Savanne, who had initially stepped away from the 2019 race. The DLP recently "replaced Darroux's replacement"- Marva Williams.

And the DLP's Marigot candidate withdrew mere hours after her name was announced at a grand rally at Londonderry.