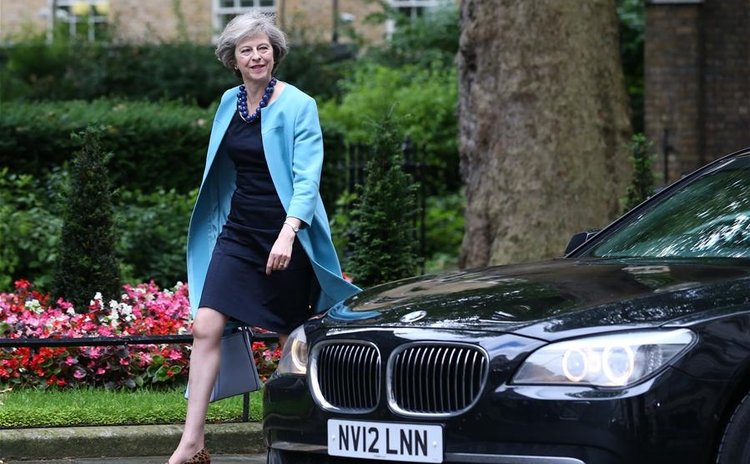 Theresa May goes to a Cabinet meeting

LONDON, July 11 (Xinhua) -- British Home Secretary Theresa May was given a rousing reception in the Houses of Parliament Monday night as she was endorsed as the new leader of the Conservative Party by Conservative MPs.

MPs cheered and banged on their desks as the home secretary arrived at what has been one of the most extraordinary and fastest moving days for generations in British politics.

In her first speech as successor to David Cameron as leader of the Conservatives, and prime minister-in-waiting, May said she was "honored and humbled" by her new role.

She has also vowed to steer Britain through the process of its exit from the EU following last month's historic referendum. May supported the Remain camp in the national referendum, but is determined to see through the will of the majority, saying a new relationship will be forged for Britain in the wake of the Brexit vote.

Monday started as a busy working day for May, 60 this year, as she unveiled her leadership manifesto in Birmingham. Her plan had been embarking on a tour of Britain to win support for her leadership bid.

Minutes after she spoke in Britain's second largest city, her leadership challenger, Energy Minister Andrea Leadsom dropped a bombshell in a speech 164 km away in London.

Leadsom announced she was dropping out of the race, leaving May as the sole leadership candidate.

Her surprise announcement stunned her supporters who believed she would have been a potential winner among many of the 150,000 party members set to decide which of the two to choose.

Leadsom has been under fire for her front bench experience, facing criticism for an interview in a Sunday paper which was taken as a suggestion that as she was a mother of three, she would make a better candidate than childless May.

In her speech, Leadsom pledged her support for May and said she had taken the decision to stand down in the interests of the need for strong leadership. Her opponent May had strong following from Conservative MPs, whereas less than 25 percent backed her bid.

May, having so much support from MPs, and the economy needing certainty in the aftermath of the Brexit vote, it was better, said Leadsom, to have a rapid transition than a protracted leadership race.

Soon after that May will arrive at the palace to be invited by the Queen to head the government as prime minister. May will then be driven to her new home, 10 Downing Street.

Between now and then May will start the task of handing out front bench jobs to form her own cabinet, naming her secretaries of state and various ministers.

Whether Leadsom will be in line for a government job is not clear, but many politicians believe she would be a good choice for a role in government.

The only clue came in May's praise of her leadership opponent, recognizing Leadsom for the dignity she had shown by stepping down.

May said her leadership bid had been based on the need for strong, proven leadership and the ability to unite both party and country and a positive vision for Britain's future.

And she emphasized her attitude to the referendum decision, saying: "Brexit means Brexit and we're going to make a success of it".

The drama surrounding the endorsement of a new prime minister overshadowed drama in the main opposition Labour group where Angela Eagle announced a challenge to party leader Jeremy Corbyn in a leadership battle.

Corbyn, out of favor with most of his own Labour MPs, has said he will stand in a leadership contest. Labour's National Executive Committee (NEC) will announce Tuesday whether Corbyn's name will automatically go forward.

If the NEC rules he needs to be nominated by MPs, it could spark a legal challenge.

Eagle said her leadership bid was aimed at uniting the party, but it seems the civil war on the Labour benches is far from over.