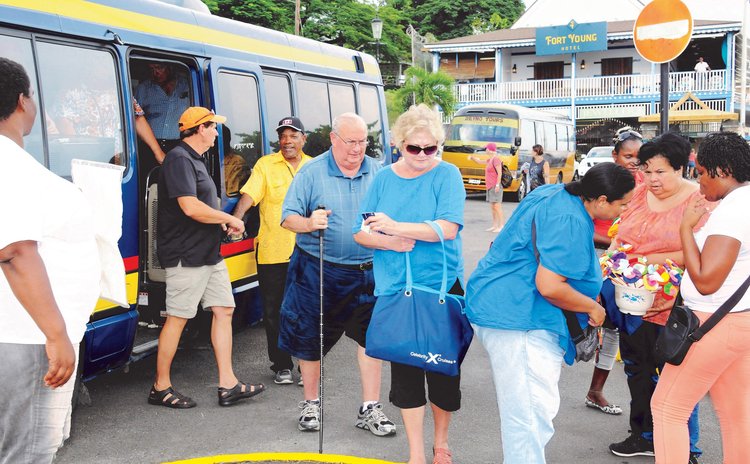 Before COVID-19:Tourists leaving a bus on the Roseau Bayfront after a tour

That Dominica's tourist arrival numbers were down drastically in 2020 is of no surprise to anyone. Not to Gregor Nassief, the chairman and CEO of Gems Holdings Ltd, developers of luxury tourism businesses, whose properties include the multiple award-winner Secret Bay and the historical Fort Young Hotel. Not to Jonathan Vidal, a local ground tour operator and former president of the Dominica Combined Taxi Association. Not to Athie Martin, the hotelier and environmentalist. Not to anyone.

In fact, not even the fact that the drop was far worse than the average loss across the Caribbean has come as a shock to the people directly involved in the day-to-day business of tourism.

"No, I'm not surprised. Even if it had been worse, I would not have been surprised," declared Martin in an interview with The Sun. "You can tell. We live here, we see it, there's nobody here, there's nobody coming…we are not on anybody's radar, it appears."

In its Caribbean tourism performance report released last week, the Barbados-based Caribbean Tourism Organization revealed that tourist arrivals to Dominica fell by a crippling 75.7 per cent in 2020 when compared to 2019, with only 21,733 tourists visiting the island during the 12-month period. The drop was ten points worse than the overall Caribbean average of 65.5 per cent, with only St. Kitts and Nevis (down 77.7 per cent) and Bermuda (84.4 per cent) recording steeper falls among the 21 countries for which figures were available for the entire year.

"We don't have the air access and Dominica is the [sort of] place you have to want to come to, to make the special effort to get here," Vidal, whose business has stalled due to COVID-19, the told The Sun. "Under the circumstances I don't think the people who could travel were the ones who would make a special effort to come down here."

The end-of-year numbers paints the true picture of how seriously the coronavirus pandemic has battered the critical foreign exchange earner. The signs have been there for all to see since the country reopened in August last year after a five-month shutdown of the international borders due to the virus. The ferry and cruise terminals remain closed and the Douglas-Charles Airport looks more like a ghost town than a place of commercial traffic.

However, Nassief, the chairman of Fort Young Hotel, which was forced to send home most of its employees when the crisis began to bite last year, told The Sun the industry's performance was not surprising based on two important factors.

"First, our government, to their credit, established some of the strictest arrival protocols in the region," argued the local hotelier, citing the early insistence on a negative PCR test taken within 72 hours of travel, "while many islands were asking for PCR test results five, seven or even ten days before travel. We were one of very few to require rapid testing on arrival, as well as a fifth day PCR [test]. This has kept Dominica safer than most islands - which has to be the priority – but impacted arrivals as many travellers sought out destinations with fewer restrictions -and of course direct flights.

"The second reason is that we virtually stopped promoting the destination, which we are paying - and will continue to pay - a heavy price for. Our 'Safe in Nature' protocol, established jointly between the ministry of health, the ministry of tourism and the private sector, is a remarkable opportunity to grow visitor arrivals while keeping the destination safe, but we have not promoted it effectively in the several months since it was launched."

Dominica's performance can be placed in greater perspective by comparing it to regional destinations of similar size. Anguilla, for example, recorded a 73.4 per cent decline, when compared to 2019. But nearly four thousands more stayover tourists visited the British overseas territory (25,381) than did Dominica, even though it began receiving visitors again on 1 November – nearly three months after Dominica – after putting in place strict entry protocols that included an application process, steep fees to cover the cost of "extended immigration time [and] entry and a digital work permit" and proof of a negative COVID-19 test result obtained three to five days prior to arrival, along with travel health insurance covering COVID-related treatment.

Despite recording a 77.7 per cent fall, St. Kitts and Nevis, which reopened its borders at the end of October, nearly three months after Dominica, welcomed 28,721 overnight tourists, while Grenada, which reopened on 1 October, registered 43,821 visitors, a 73.1 per cent decline.

"We still haven't addressed the harsh realities of getting to Dominica," stressed Martin.

Still, there's reason to be optimistic, said a pragmatic Nassief, who recommends that keeping the country safe, and embarking on a nationwide vaccination exercise as "the only way out of this over the short and medium term and must therefore remain our number one priority".

"At the same time, we need to significantly improve our destination marketing, the management of our tourism product and our efforts to establish easy and more affordable ways to get to Dominica," he insists.

Vidal, on the other hand, isn't very hopeful, telling The Sun the country's product is simply too stale.

"There's nothing new – we have good products - but nothing to excite somebody to come down," argues the local tour operator. "Nothing has changed. You've got the Emerald Pool, the falls, the lake and this kind of stuff, but nothing new and exciting."