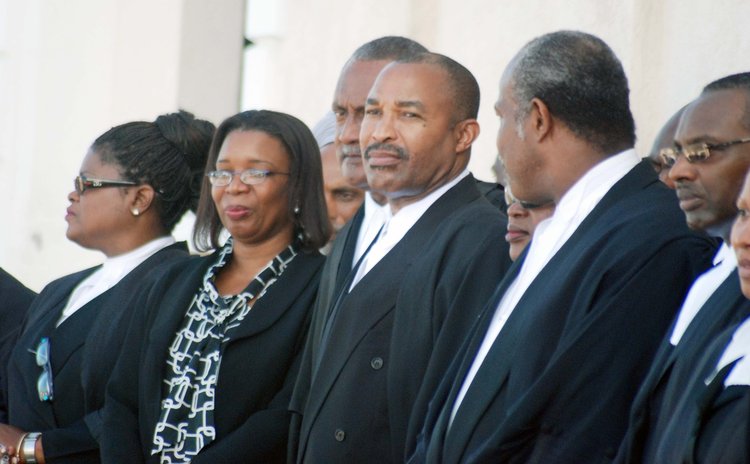 Glen Ducreay,front row third from left, at the opening of law year

A law that has never been challenged before and which occupied the airwaves and the media prior to the general elections when Lennox Linton, Political Leader of the UWP now Honourable Leader of the Opposition at the Melville Hall Airport now Douglas-Charles airport admitted to having in his possession crab backs whilst he went through airport security during his intended travel overseas was on March 4, 2015 ruled against by Magistrate Arly Gill at the Magistrates Court in Marigot when Attorney Glen Ducreay of Glen Ducreay Chambers and CasaRopa Chambers represented defendant Rosalind Wathey of Salisbury, Dominica but a resident of Dutch St. Maarten.

On November 7, 2014 after spending several days in Dominica celebrating Dominica's Independence businesswoman Rosalind Wathey who has been generous over the years in making several charitable donations to needy organizations and the Roman Catholic Church in Dominica was arrested at the Melville Hall airport and charged for having in her luggage ten crab backs and one lifeless agouti contrary to the laws of Dominica which make it mandatory for any person possessing wildlife whilst travelling overseas to obtain and display a permit at the point of exit.

Specifically, Mrs. Wathey was charged for being in contravention of section 32 of the Forestry and Wildlife Act Chap 60:02 which reads:

No person shall export any live or dead wildlife or parts thereof except under a permit and in accordance with conditions specified in such a permit issued by the Director. The permit shall be in Form 5.

In her evidence Airport Security Officer Martha Greenaway stated that she had detected via X-Ray images of crab backs and an agouti in the luggage of Rosalind Wathey, which discovery lead to Mrs. Wathey being charged for violating the said law. She further testified that Mrs. Wathey, when asked about the wildlife, stated that she (Mrs. Wathey) did not have a permit and that she did know that she needed a permit for crab backs and the agouti which she was taking overseas with her because she was sick (when they were given to her) and thus could not eat them (whilst in Dominica). The evidence of Martha Greenaway further revealed that for about 10 minutes the evidence consisting of the physical crab backs and agouti) were not in her custody and there was no evidence adduced that she knew anything about the custody of the evidence during that period. During cross examination Martha Greenaway testified that when Mrs. Wathey was apprehended the hunting season was open and that during the hunting season a permit was required to travel with wildlife. She added that she was in no position to tender the crab backs and agouti into evidence in the matter.

During the testimony of Police Officer Henry Elizee, he attempted to put into evidence a box containing the crab backs and the agouti but Attorney Glen Ducreay objected to the Prosecutor's application to do so on the grounds that the box was not the actual box that the crab backs and agouti had been placed in and that Mrs. Wathey had placed her signature on the actual box but that the signature of Mrs. Wathey was not the box that had been shown to the court. In fact, only the signature of PO Elizee and a date were visible and appeared on a label attached to the box. Moreover, PO Elizee had stated earlier that the box was sealed when in truth and in fact the box displayed in court was open which clearly suggested that the evidence had been somehow tampered with either deliberately or mistakenly. In the circumstances, Magistrate Arly Gill sustained the objection of Attorney Glen Ducreay.

When cross examined by Attorney Ducreay and asked about his understanding of the word "exporting" used in the law, PO Elizee failed to convince and move the court that the word "exporting" also applied to moving goods for personal use from one country to the next. In fact, when questioned by Attorney Ducreay as to whether he would say that travelling with goods for personal use represented "exporting", the officer responded that one was "technically exporting" them.

In light of the testimony that had been given thus far and the evidence, or lack of evidence, before the court and the line of questioning, representation and arguments of Attorney Ducreay, Magistrate Gill was left with no alternative but to address the court and to dismiss the matter.

He held that the Act section 32 fails to define the word "exporting" to include the moving of goods for personal use if that was the intention of the framers of the Act and consequently, the ordinary meaning of the word has to be referred to, which is construed as the movement of goods intended for sale or exchange and that in the case before him no evidence had been adduced that the crab backs and the agouti were for sale or exchange.

Magistrate Gill further held that it could not have been the intention of the original framers of the Act to place the movement of goods for personal use under the ambit of the said law as legislated. Additionally, Attorney Ducreay pointed out that the Act stipulated that "The permit shall be in Form 5" and that he had perused several law volumes containing that said Act and had failed to locate and identify such a "Form 5" that the Act refers to and which is supposed to be part of that Act. Additionally, there was no evidence introduced before the court that the "Form 5" – the permit - had even been gazetted in accordance with the law and practice that all Acts shall be gazetted.

The Magistrate also held that in addition to the previous grounds for dismissal of the matter the very lack of the evidence by virtue of the Court upholding Attorney Ducreay's objection to the box ostensibly containing the prohibited wildlife being put into evidence was also fatal to the Prosecution and State's case and this was further compromised by the failure of the Prosecution to assure the court that there was an adequate and credible chain of custody of the evidence.

Many persons have been arrested and fined for violating the Act even when such persons are attempting to travel with wildlife meant for personal use. Now, members of the public have a reprieve as they can now successfully challenge the law when they travel with crab backs and other wildlife that are intended solely for personal use and consumption and not for commercial use.