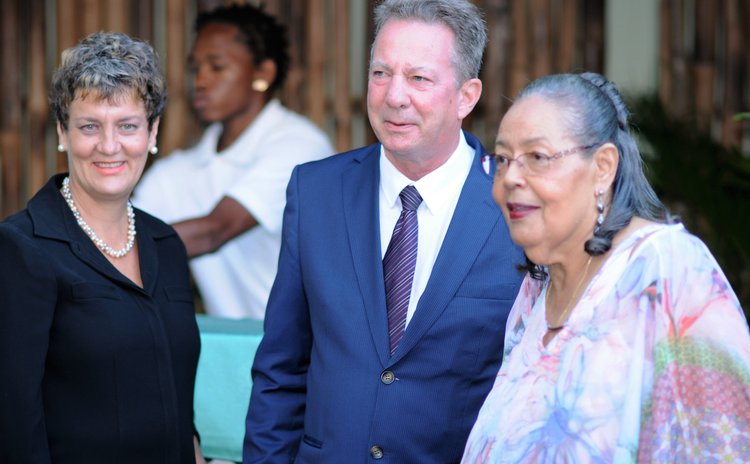 After serving the Kingdom of Belgium for 32 years as its honorary consul in Dominica, attorney at law Cilma Dupigny retired and handed the baton to another Dupigny, businesswoman Jacqueline, at a short and simple ceremony at the Garraway Hotel in Roseau last Wednesday.

Jacqueline Dupigny read her oath of office in French, an official language of the Kingdom of Belgium.

Calling the occasion historic, Guy Sevrin, the Ambassador of the Kingdom of Belgium said the King of Belgium had directed him to bestow on Cilma Dupigny the medal of "Officer in the Order of the Crown".

While pinning on the medal, Ambassador Sevrin said "not many people receive that award".

"It is more than time to retire," said Cilma Dupigny after receiving the award. "Actually I overstayed my time."

She said that the late Bishop Arnold Boghaert recommended her to the post. He was one of several priests, nuns and religious persons who have served Dominica from Belgium. The most famous was Sr.Alicia de Tremmerie, the founder of the credit union movement in Dominica. Another notable Dominican priest from Belgium was Father Charles Vermeulen who died in December 2016.

Recalling her role as the Belgium honorary consul in Dominica, Cilma Dupigny said she remembered having to visit a young Belgium citizen at the Stockfarm prisons, a place she hated to visit. The young man had been arrested for the possession of illegal drugs. And there was the occasion when she was called to witness a postmortem examination.

"I understood that he died from a heart attack," she said. "Again, I did not look forward to attending a postmortem especially of a person I did not know."

Also attending the meeting was Francine Baron, the minister of foreign affairs. In a short speech she said Dominica and Belgium have had a long and friendly relationship.

"We share, however, not only a religious history but strong concern for poverty eradication, mitigating the effects of climate change, recognition of the importance of human rights and a consolidation of democracy as well as the promotion and implementation of the Paris Agreement and the United Nations Sustainable Development Goals," Baron said.