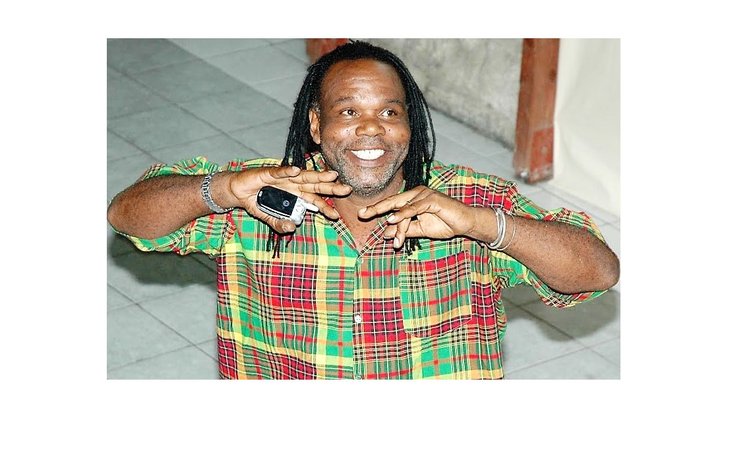 Looking at Earl Darius Etienne's "Flowers" painting, Historian Dr. Lennox Honychurch can't help but become nostalgic as the nation pauses in mourning and reflection "for one of its giants of creative art."

"Such an open and humble soul and yet a powerhouse of talent. We are all meditating on you and your gifts to Dominica and the region, Earl. In gratitude for passing among us and sharing your life and work," the historian wrote on social media.

In the week since the nation learned of Etienne's death who passed away on February 23rd, 2022 due to cancer- one day before his 65th birthday- tributes have flooded in for the artist, many paying homage to his lasting legacy on the creative industry.

"He really was a creative tour de force and he used so many different types of medium. It was not just a matter of painting a simple picture of a view of Dominica, but his interpretation, for instance, his abstract art of all kinds of things from the traditional dances of Dominica, to things like the banana industry to comment through art on the politics of Dominica, all of these areas over many years, he has contributed to, and he was in many ways a self-made artist," stated Dr. Honychurch.

Etienne, who is well-known for his ability to work with a variety of materials from canvas, wood, paper, fabric to old recycled jeans -his styles and genres of painting also varied- returned to Dominica just two days before his passing after being flown to Martinique for medical treatment.

"Earl Etienne was an exceptional talent; a creative genius, skilled in varied forms of artistic expression; and a mentor to the many he inspired to follow in his footsteps. I was a great admirer of his work and will cherish the pieces of his legacy left behind. He will be missed," Skerrit said while extending condolences to the family and loved ones.

Determined to turn his dream into a reality, in his younger days, Etienne fought and pushed his way to the top, focusing on his studies and giving all that he had to make it happen.

In the early 1980s, he was awarded an Organization of the American States(OAS) Fellowship to study fine art at the Edna Manley College of Visual and Performing Arts in Jamaica.

While there, a life-changing fire would inspire him to develop his unique technique of smoking, by using the image formed by soot, applied directly from a flame, in his artistic work.

Through fire and heat, Etienne created art on wood. His works also embody African and Caribbean souls with his depictions of traditional dance, dancers, and carnival. His works are influenced by ancestral, spiritual, social, cultural, and physical elements of his Caribbean environment.

Upon his return to Dominica after graduation in 1986, he took up a post as a cultural officer in the Ministry of Culture while continuing to paint. This arrangement allowed him to mentor a new generation of Dominican artists and create a basis for a serious art industry in Dominica.

Commenting on his death, the Cultural Division stated that "Uncle Earl was a master and genius when it came to art."

"His out-of-the-box approach to art using materials and tackling subjects in the most unique way, was a natural talent and gift that only Earl could possess. It can be said that he is one of the most recognizable and influential artists from Dominica and his passing will surely leave a void in the art community not only in Dominica but the region," the Division said. "We will forever cherish the knowledge and wisdom he gave as a member of staff at the Division of Culture and the mentor role he played to the younger staff even after his retirement from the Division."

Prominent artists like Shadrach Burton were also among those to pay tribute to Etienne who he labeled as the "most influential artist to emerge out of Dominica."

"I never tell the story of how my career as an artist got started without mentioning Earl Darius Etienne and how he started mentoring me back in high school, back when no one understood my liquid fingerprint, he kept telling me to keep working on it, "keep doing it SHADI, it will take off one day" Burton recalls. "It took another decade before I even sold one but he never doubted me. I was always intrigued by the quality and sheer volume of work Earl created each time I visited his studio, he was always working on something."

As an artist, Etienne grew from basic Caribbean landscape portrayals to highly-sophisticated expressions and techniques.