Early Childhood Education: There's none so blind as those who will not see 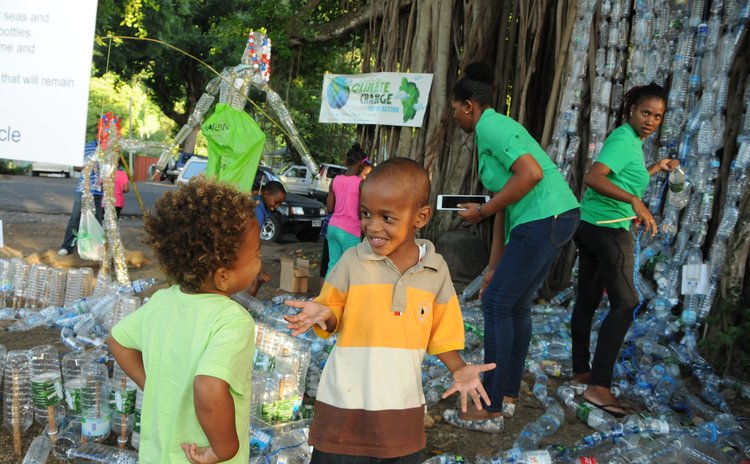 Children and plastic bottles at the Dominica Climate Change Day of Action at the Botanic Gardens, Roseau on Saturday November 28, 2015

The solution to almost all of Dominica's education problems has been staring us in the face for decades. But as we stare back unblinkingly, like the visually challenged, we are reminded of the saying "there are none so blind as those who will not see". We contend that our planners of education development know very well that "quality" early childhood education is the solution to our major problems in primary, secondary, and tertiary education. But these planners continue to stare blindly ahead and stubbornly refuse to act on their knowledge.

So, despite many policy pronouncements and efforts at educational reform many students who graduate from secondary school are basically functionally illiterate. Recently, Dominicans celebrated with the few stars of our education system, the few who excelled at the Caribbean Examination Council (CXC) examinations. But those of us who were celebrating did not focus on how badly the majority of students performed, or are performing, at this examination. It happens all the time.

The fact is, less than ten percent of students who graduate from secondary schools on the island each year have performed well enough to matriculate to university. If that is not a failing grade for our educational system, we don't know what it is.

We have said before and we will repeat: the real problem with Dominica's educational system is that the foundation is rather fragile and rickety, hollowed by termites, rotten at the core. And this unsustainable foundation is due to an inadequate early childhood education system that caters to children from 0 to five. So, if we are honest with ourselves, we will all agree that the majority of these Early Childhood Education (ECE) schools are overcrowded, poorly equipped, and are managed by teachers who are undertrained, underpaid, and underappreciated.

A few years ago, the Roosevelt Skerrit administration took the absolutely necessary step to elevate the status of the early childhood education sub-sector.

Undoubtedly, the early childhood education sub-sector is in dire need of attention. Most of these privately-owned institutions are in bad shape, physically; they are overcrowded, under-resourced, and supervised by teachers who are short of training and are paid less than the wages of some domestic workers.

To start addressing the problems of ECE, the government must begin putting its money where its mouth is: increase the current budget allocated to early childhood education that is currently much less than one percent of the total amount allocated to the ministry of education.

A chain, as we all know, is only as strong as its weakest link, and overtime early childhood education has been so badly neglected that the other links of the chain- primary, secondary and tertiary education- is collapsing like a deck of cards.

With weak early-childhood preparation, a large number of children can neither read nor write at the end of their school life. Education officials estimate that more than fifty percent of students complete five years of secondary education or do not attain the numbers and quality of examination passes that would take them into good jobs or directly into universities and colleges. Additionally, more than 60% of the population of 20-29 year- olds are either unemployed or unemployable.

As we argued earlier, the behaviour and academic potential of a 15-year-old are largely determined by the quality of the education that he receives from birth and later through the early childhood education system. Studies have shown that the most critical period in the development of a child's brain occurs in the first six years, the so-called preschool years.

Hence, pre-school teachers, especially, have an awesome duty. But unfortunately, we only seem to recognise this with words: not with adequate salaries, not with better working conditions, not with elevated social status. We do not recruit our best minds to become pre-school teachers, we do not celebrate their accomplishments and we do not compensate them based on their value to society.

And now, the Covid-19 pandemic has made the ECE situation extremely precarious. With the closure of schools and the shift from face-to-face classrooms to online, parents who were already confronted with the challenge of keeping themselves and their families safe and adequately fed, have been allocated the mammoth task of teaching their preschoolers at home.

How, in heaven's name, do they do that? Shouldn't that then be a major discussion point during November, the period that the government has designated as Early Childhood Development Month? Did you say, what about talking about christophine instead?

But no one's even thinking about that serious challenge of parents suddenly becoming preschool teachers due to Covid-19, which, by the way, justifies our reference to John Heywood's proverb: "There are none so blind as those who will not see. The most deluded people are those who choose to ignore what they already know".