Earth's Natural: From the love of local seasoning 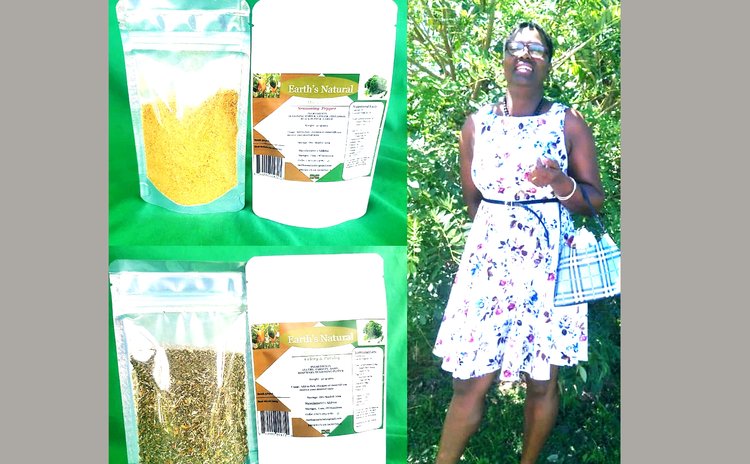 Eartha Pascal and some of her products

What started off as a quest to bring all-natural, no preservative seasoning to her own kitchen, has for the past decade brought a signature flavor into the kitchens of many others.

Eartha Pascal, the proprietor of Earth's Natural, built her business on the idea that having fresh, well-made spice blends on hand will drastically improve anyone's cooking.

Speaking to The Sun, the Marigot native shared how she started her venture with the assistance of her family in their home.

Before the launch of her product in 2012, Mrs. Pascal said her all-natural organic seasoning blends were only used for the preparation of her family's meals.

"I started mixing my own herbs and adding them to my cooking. I gave my mix to other people to try and the feedback was very positive," she stated, recollecting the events that propelled her business.

According to her, she had long mulled over the idea of being an entrepreneur, hence the praises received from those who tested her seasoning mix validated the decision to turn a hobby into a business.

While the seasoning lover stated her initial product choice was wet seasoning, she was however encouraged to transform her products to dry seasoning during the early stages.

As operations grew, the products were certified by the Bureau of Standards and then introduced to the wider public when they landed on the shelves of H.H.V Whitchurch & Co. Ltd. At that moment, Mrs. Pascal said she was a bit anxious however "in little time they were sold out," she excitedly told.

"Shortly after Astaphan started selling the product and it was well received by the customers. Right now my products are sold at other supermarkets like Issa, S-Mart and Fresh Market and people often call me to give compliments or to make large orders. The feedback I have been receiving is very good and I have gained customers from all over not only in Dominica," she averred.

The two signature seasoning mixes curated by Earth's Natural, a seasoning pepper mix and a celery parsley mix have also gained approval from customers in the United States Virgin Islands (USVI), Miami, and New York where they are also sold.

For the past 10 years, Earth's Natural has prided itself in being all natural and organic with no preservatives. To accomplish this, Mrs. Pascal revealed that all raw materials used for the production of her items are sourced locally either through her garden or other local farmers.

"I grow my parsley, celery, black pepper, basil, and thyme. I once grew seasoning peppers but right now I buy them from other farmers," she said. "I make the seasoning mix at my home in Marigot, it is packaged there and then delivered to the various businesses for sale."

While the local entrepreneur says funding has been one of her major challenges, she admitted, that with the assistance of her family and the support from her valued customers, her journey has been rewarding.

With 10 years down, she expressed optimistically that an end is not in sight for Earth's Natural.