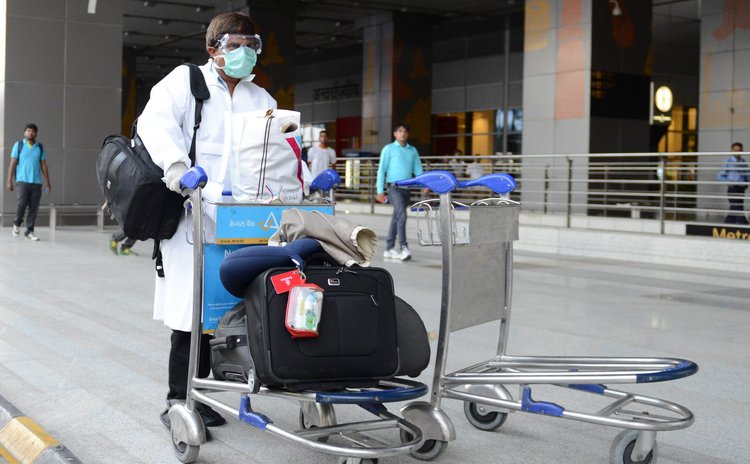 NEW DELHI, Aug. 27, 2014 (Xinhua) -- A passenger, who did not pass the preliminary screening for the Ebola virus, leaves the Delhi International Airport to Ram Manohar Lohia Hospital

DAKAR, Aug. 30 (Xinhua/Sun) -- With the first case of Ebola confirmed on Friday by Senegalese health authorities, the epidemic has spread to a fifth West African country and claimed over 1,500 lives in the region since earlier this year.

Health Minister Awa Marie Coll Seck said a Guinean university student infected with Ebola has carried the deadly virus to Senegal after he slipped into the country trying to evade health surveillance for weeks.

As of Aug. 26, the total number of cases attributed to Ebola virus disease in Guinea, Liberia, Nigeria, and Sierra Leone has reached 3,069, including 1,552 deaths.

The World Health Organization (WHO) said there could be as many as 20,000 cases before the outbreak is brought under control.

As of Friday, a total of 13 people, including five doctors, died of Ebola in the Democratic Republic of Congo.

Nigeria, where the virus has claimed five lives, on Thursday confirmed two more cases, bringing the total number of patients under treatment to three.

Ernest Bai Koroma, president of Sierra Leone, dismissed his health minister on Friday "to create a conducive environment for efficient and effective handling of the Ebola outbreak" that has killed more than 400 people in the West African country.

Ghana raised Friday its Ebola screening coverage a notch higher with screening travelers from all West African countries for Ebola symptoms before their entrance into the country.

Uganda has issued tough conditions for the Guinean football team to travel to Uganda in a 2015 Africa Cup of Nations (Afcon) qualifier on Sept. 10, saying the risks of importing the virus into Uganda cannot be ignored hence they have been forced to have measures in place for prevention.

Angolan Health Minister Jose Van-Dunem has called on all health facilities in the country to create conditions and bio-security measures to respond duly to a possible case of Ebola without creating panic.

Out of Africa, the British Foreign and Commonwealth Office on Thursday issued travel warnings to its nationals against "all but essential travel" to Sierra Leone, Guinea and Liberia due to the outbreak of Ebola.

WHO on Thursday issued a roadmap to guide and coordinate the international response to the outbreak of the deadly disease in West Africa.

It said the aim of the roadmap is to stop ongoing Ebola transmission worldwide within six to nine months, while rapidly managing the consequences of any further international spread.

On Friday, the journal Nature published a study saying 18 lab monkeys given high doses of the Ebola virus fully recovered after being given the prototype drug ZMapp, which reversed bleeding in the animals.

The monkeys were given the drug three to five days after they were infected with the virus and when most were showing symptoms. That is several days later than any other experimental Ebola treatment tested so far.

The drug also completely protected six other monkeys given a slightly different version of it three days after infection in a pilot test.

On Thursday, the U.S. government announced it will start initial human testing of an investigational vaccine next week to prevent infection of the virus.