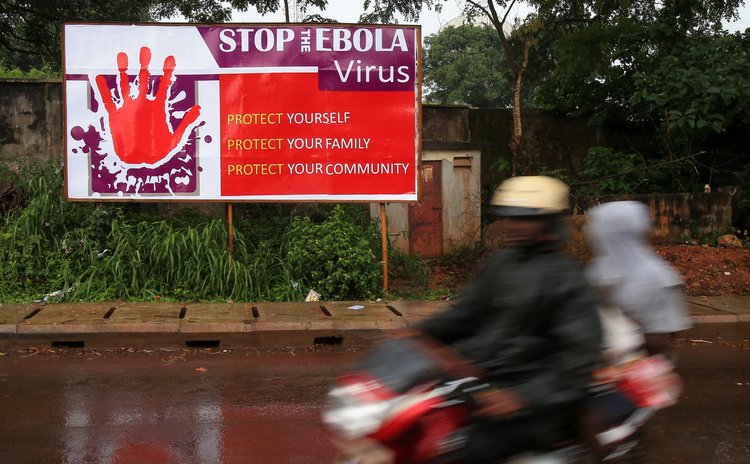 FREETOWN, Aug. 18, 2014 (Xinhua) -- People ride past a board with control and prevention information of the Ebola epidemic outbreak in the Ebola-affected Freetown, capital of Sierra Leone, Aug. 17, 20

ROME, Dec. 17 (Xinhua/Sun) -- The number of people facing food insecurity due to the Ebola epidemic in Guinea, Liberia, and Sierra Leone could top 1 million by March 2015 unless access to food is drastically improved and measures are put in place to safeguard crop and livestock production, two UN agencies warned in reports released on Wednesday.

The disease' impact is potentially devastating in the three countries already coping with chronic food insecurity, the UN Food and Agriculture Organization (FAO) and the World Food Program (WFP) said in the reports.

In December 2014, half a million people are estimated to be severely food insecure in the three worst hit Western African countries. The loss of productivity and household income due to Ebola-related deaths and illness as well as people staying away from work, for fear of contagion, is compounding an economic slowdown in the three countries.

The situation comes at a time when more food needs to be imported by all three countries, but revenues derived from export commodities are affected.

In their reports, FAO and WFP explained how the outbreak of Ebola has caused a significant shock to the food and agriculture sectors in the affected countries.

While estimated crop losses appear relatively modest at national level, sharp disparities in production have emerged between areas with high infection rates and other regions in the three worst-hit countries.

In particular, labor shortages have marred farming operations such as planting and weeding while movement restrictions and fear of the disease have disrupted agricultural market chains, according to the reports.

"The outbreak has revealed the vulnerability of current food production systems and value chains in the worst Ebola-affected countries," said FAO Assistant Director-General and Regional Representative for Africa Bukar Tijani.

"FAO and partners need to act urgently to overcome the agriculture and market disruptions and their immediate impact on livelihoods which could result in a food security crisis. With timely support, we can prevent the outbreak from having a severe and long-lasting impact on rural communities," he added.