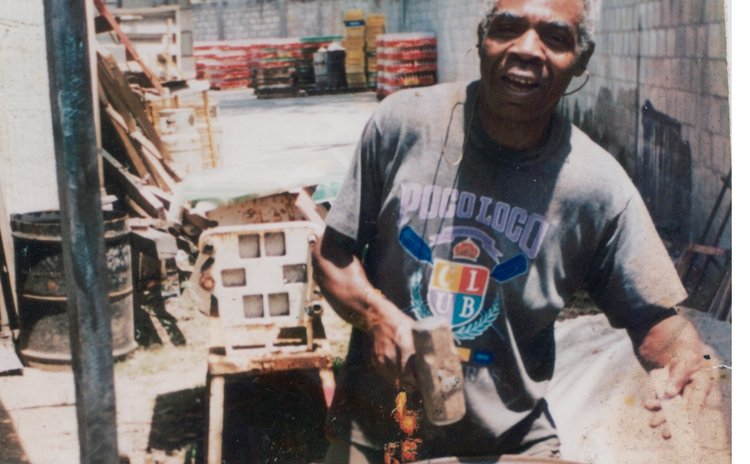 Eddie Andre in his pan-yard

Pan music evolved in the Forties and Fifties from the pounding of biscuits tins and old iron bars. It began in Trinidad and Tobago and it spread throughout the region and the rest of world. Pan music came to Dominica from Antigua.

In the early days of the development of that musical instrument, pan was considered to be the music of the lower classes. It flourished in ghettos and pan yards of Roseau especially on the Roseau River bank.

In the early days pan players and their instruments showed up mainly at Carnival time. These players were thought to be trouble-makers and vagabonds and the names they adopted did little to dispel that image. The bands took on names such as Invaders, Brute Force and Hellsgate from Antigua; Invaders and Pan Demonium of Dominica; Desperados and Outlaws from Trinidad.

This was the environment in which Eddie Andre grew up to become a famous pan player.

He was born to Evelyn and Henderson Andre seventy three years ago. And during the past decades his name has almost become synonymous with the playing of pan music in Dominica.

Eddie grew up in Kennedy Avenue, which was then called New Street. And like most of the boys in the area, Eddie attended the Roseau Mixed School located just a few blocks away.

He was an average student but his parents could not afford to send him to secondary school. When his mother died, and the family dispersed, Eddie was forced to take up the job of handyman at the Letang's Bakery on Cork Street for a salary of $5 per week. He soon moved on to become a mason. Finally, Mr. Andre settled in with the firm of Josephine Gabriel and Company where he worked for a long time as a warehouse supervisor.

In 1953 a pan leader from Antigua named Walton encouraged Andre to form the Sun Valley Steelband. This started Andre's long journey in the art of steel band playing.

He then began tours with various bands to Antigua and the other islands.

The famous Fanta Pandemonium was born in 1976. It was named after one of the drinks of the sponsors Josephine Gabriel and Company. Andre started the band with his young children and afterwards included other children of the same age group of 7 to 11 years old. The group practiced on Andre's property with a few borrowed instruments. Under his tutorship the group grew from 8 to 15 children. They soon gained a reputation as a band for all seasons which played all types of music, from Calypso to Classical. But pan music was going through some changes.

Modern technology, such as the hi-fi, has made pan music less popular than it was in the Fifties and Sixties. Because of the dwindling interest Andre has begun a Junior Fanta Pan group of 7-16 year olds, so that the art-form would live on.

During the last five decades, Eddie Andre trained many persons to play and appreciate pan music. He performed regularly at hotels and there was also an occasional tour. For his contribution to the art form, Josephine Edward Andre received one of Dominica's highest awards. He received the Sisserou Award of Honour in 1980. He was also honoured with the country highest cultural award, the Golden Drum. Andre was the founding member of Phase Five Steelband which has been in existence for 23 years and is one of the largest musical group of its kind in Dominica.

Pan music grew under the guidance of Eddie Andre. Without him the art-form may have died. There is no doubt that his name will live forever in the annals of pan music.

He was one of Dominica's greatest pan players and a great Dominican of the 20th Century.