Edison James: All friends, no enemies in parliament 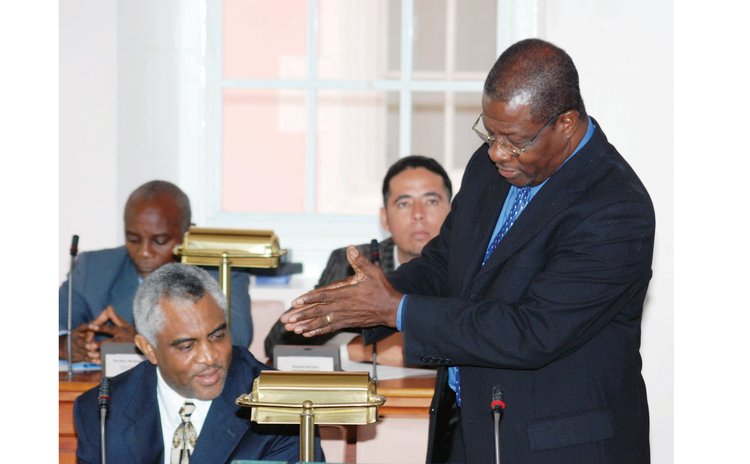 Edison James speaks in Parliament in 2007

Never mind the rancor, the bitterness, the acrimony. Never mind the years of squabbling, the many walk outs, the boycotts, the court challenges.

Never mind the apparent acrimony, the perceived animosity, the acerbity, the retired Marigot MP and former prime minister, Edison James, has told The Sun that, as a parliamentarian, he never carried hatred in his heart for parliamentary colleagues. Not once. Not ever.

"When I am in parliament everybody is my friend," James told The Sun, while emphasizing that such "friendships" were cast aside the moment he got up to make his presentations.

"When I stand up before the microphone there are no friends in front of me, my friends are behind me," said James, the longest serving MP until his retirement at the dissolution of parliament last November.

Of course, James won't be in parliament when the House next meets, having walked away after nearly 25 uninterrupted years as the representative for Marigot. However, he has advised those he left behind and those coming in for the first time that they ought to be friends of all and not to allow politics to get in the way.

"I would like to suggest to people that we should not have personal enemies, we should not let politics make us enemies," James, who was first elected on 28 May 1990, told The Sun in an exclusive interview. "We should always be friends in the parliament."

"Yes, even Alix Boyd-knights," he responded when asked by The Sun. "The sad thing is I don't think she has been able to reciprocate."

The history between Boyd-Knights, the returning speaker, and the opposition United Workers Party (UWP) is well known. Their relationship has been less than cordial, the language used to describe her has been less than complimentary and her treatment of, and attitude toward, the opposition has left her critics both within and outside the House believing that she constantly drinks large gulps from the chalice of hate.

However, James has said that despite the fiery exchanges, despite the passionate presentations, he holds no grudges.

"When I'm fighting for a cause I fight quite hard. I believe passionately in democratic government and I believe the parliament is the sentinel of this democracy. I try to make sure I know the rules - and I can say so myself, I feel very comfortable about my knowledge of the rules- and when I see the rules allow me to say something, and when I see the person in the chair whose responsibilities is to see the rules are upheld, (violates your rights) you have nowhere else to turn to. So I get passionate about that," said the former MP, who was the last serving parliamentarian from 1990 poll. "But I have no personal (hatred toward) the speaker."

As a matter of fact, he said, he enjoyed the exchanges and he'd often attempt to joke with the speaker.

"But she has never responded," he said.