Witness: I Saw a Man's Head on a Stone 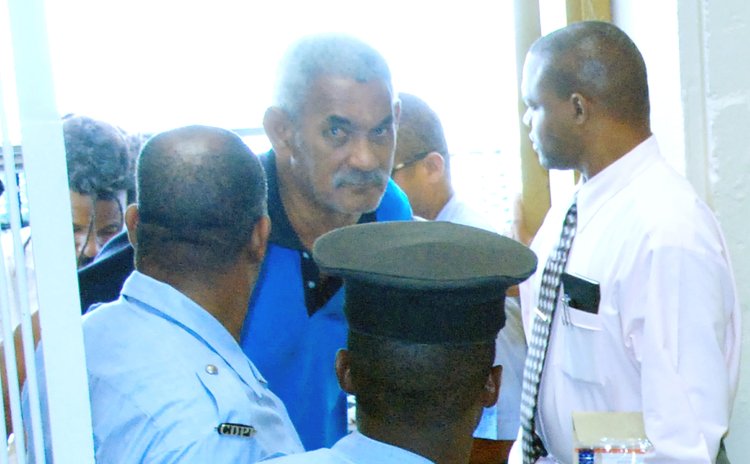 The State closed its case in the murder trial of Edward Green, 70, of Morne Daniel on Friday July 5, 2013 after calling 30 witnesses over nine days between June 17 and July 4, 2013. Police Inspector Robertson Laurent, who led the investigation, in the murder of Damian Dorival, 35, of Roseau on Wednesday June 11, 2008 was the State's last witness.

Laurent told the court that on Thursday 12th June 2008 about 8:45am Dean Green, Edward Green's son and Ernest Nesty, a tenant of the accused, came to the criminal investigation department and made a report. About 11:00am Laurent received another report of a headless body being discovered on the Elmshall Road in the vicinity of the University of the West Indies School of Continuing Studies, and from then commenced investigations into the death of Damian Dorival, another tenant of the accused.

Here are summaries of witness's statements:

Johnny Andre, a DJ for Stalin Anthony stopped off at Stalin's shop in Canefield on the evening of Monday June 9, 2008 coming from the airport. Andre met a couple of friends there including Edward Green. In a one-sided conversation, Green said: "Are you not warning your friend (Damian Dorival) to leave my place or else I will cut his head off and put it in a rubbish bin?"

The two were drinking buddies at Stalin's place in Canefield.

Philmon George, a bus and taxi driver of Canefield told the High Court that Green would confide in him that things were really hard on him, that he was always brokes. He had two guys at his apartment and they were not really paying their rent and they would still give him a hard time. Green told him he would kill Ernest Nesty. He was fed up. He had a gun. He would shoot one of them, cut off the head; throw the body one way and the head another way and they would not find it.

"He said that several times to me," he said.

And the last time was on Wednesday June 11, 2008 at Canefield at Stalin's shop.

Randy Joseph of Roseau was going to his home on Bath Road from his girlfriend's home in Pottersville about 1:30am on Thursday June 12, 2008. He came across men conversing on Constitution Hill, Independence Street in the area of Kairi FM. He recognised Edward Green as one of the men. He heard Green asked the person for the time, and the other he did not know replied that it was 2:35. The accused then proceeded down the hill.

Joseph explained that having left his girlfriend's home about 1:30, he would estimate the time to be about 1:55am. Continuing on his way home and turning into Virgin Lane, Joseph noted a blue Suzuki Jiminy right around the corner. It was blue and hard darkers on the windows and windscreen.

To a question from the jury, Randy Joseph answered that he recognised the Suzuki jeep because he was given a ride on it. And to the follow up question he answered: the jeep was driven by Damian Dorival.

Police Corporal Julian Laurent was stationed at the Mahaut Police Station when he took a telephone call about midday Thursday June 12, 2008 from a senior police officer. He went to the vicinity of a place called The Lab and saw the accused sitting under a mango tree among other men. Laurent went to the accused and told him that the police in Roseau would like to talk to him in CID. Green accompanied Laurent to a police vehicle and he drove him towards Roseau, but on reaching Fond Cole Laurent received a call from the investigating officer, Inspector Robertson Laurent. Corporal Laurent turned the vehicle around and drove back towards the accused's house at Morne Daniel. Laurent handed Green to Laurent and returned to the Mahaut Police Station. Ian Frederick Dorival, brother of the deceased, told the court that he was at his home in Elmshall, Roseau about 7:55am on Thursday June 12, 2008 when he received a phone call from a neighbour. He got on his motorbike and rode about a quarter mile to an area about 100 feet from the UWI Centre in the Elmshall area. He met two schoolboys in uniform and they pointed out something to him. He looked over the edge of the road about 10 feet down where debris was being dumped, and saw a body. He did not recognise the body. Eventually the police came and cordoned off the area with tape. The Fire Service officials came, went down and retrieved the body. It was a headless body.

Ian Dorival said he noted a tattoo on one of the hands of the body and it resembled one of his brother's tattoos. He got back to his home, dressed and went to town some 15-30 minutes later. He got a call from a colleague and called Corporal George Theophile. Ian Dorival also called his brother's girlfriend, picked up another friend and went to the Princess Margaret Hospital. He met and had a discussion with Theophile. He went in to view the headless body. He recognised the tattoo on the hand as a mermaid, and when the body was turned over Dorival recognised the tattoo of a big cross on the back. It was identical to a tattoo on his brother's back.

Ian Dorival next went to the apartment at Morne Daniel where he saw police officers retrieving items from the area. While on the scene some more officers came with Edward Green.

"Green asked me, 'partner what's happening there?' He added: If I am a damn ass to kill someone on my property," he said.

Dorival did not respond and he left a few minutes later.

Konica Sada Jno Baptiste, 18, who was 13 years old in June 2008, had gone visiting her aunt at Copt Hall. On Saturday June 14, 2008 sometime in the morning she had gone to the Copt Hall River with five other people including her sister, two cousins and two neighbours. They were playing hide-and-seek. She was helping one cousin look for the other people. She saw one boy go by the river and she went there with her cousin. Then she saw something on a stone, a man's head. She ran back to where her cousin was, spoke to him and went to call a neighbour. The neighbour called the police. Konica told the court that the head was about six feet away from her.

Police Inspector Martin Desmond Austrie was on duty at the CID on Thursday June 12, 2008 when he was called. He took his photography equipment and went to Elmshall where he took photographs of the retrieved body of Damian Dorival and the scene, what appeared to be blood spots and soil samples. Dr Fabien arrived and pronounced the body dead. Austrie was busy collecting evidence and photographing his findings as the case quickly developed.

He took photographs of the autopsy performed by Dr. Carl Winskog of the Forensic Sciences Centre in Barbados at the PMH on June 23, 2008. Dr. Winskog retrieved two pieces of flat metal from the skull and a piece of cloth near the right ear. The piece of cloth matched a piece missing from the T-shirt worn by the deceased. Inspector Austrie would tender 39 items into evidence. He would go to Barbados with the exhibits for analyses on June 24 with Dr. Winskog. He met Inspector Graham Husbands of the Royal Barbados Police Force. On the 25th he met with Ms Cheryl Corbin, Director of the Forensic Sciences Centre in Barbados. He returned to Dominica on June 28, 2008.

Inspector Husbands who has 15 years' experience as a firearms officer carried examinations and tests on Remington Nylon 66 Model .22 long rifle, the .22 calibre cartridges and two lead fragments on July 8, 2008. The lead fragments had no rifling on them so as a result they could not be matched with any firearm.

Director Corbin carried out examinations of the number of exhibits submitted by the Commonwealth of Dominica Police Force through Inspector Austrie. Many of the items were of human blood but there were some items without the presence of human blood.

The evidence of Pathologist, Dr Carl Winskog was read by Chief Magistrate Evalina Baptiste. Winskog performed the autopsy on 35-year old Damian Dorival on June 23, 2008. He took urine and blood samples for toxicology analysis. He also submitted two metal fragments found in the head of the deceased to the Forensic Sciences Centre in Barbados. The head was in an advanced state of decomposition, and light in colour due to exposure to water. The tongue protruded through the open mouth. There were injuries causing separation from the rest of the body under the chin to lower part of skull at the back. The doctor noted at least 20 cuts. The third cervical vertebrae and bone structure was severely fractured due to several injuries. There were gunshot entry wounds around the area of the right ear causing bone damage among other injuries like bruising. He removed the metal fragments in the skull cavity.

The doctor certified that the cause of death was two gunshot injuries to the side and back of the head with no exiting wound. The cuts to the head inflicted on the body after death was by sharp object like a cutlass. There was low level of skill during the decapitation process.

Dr Leona Ruth Fevrier-Drigo was on duty at the Accident & Emergency Department of the Princess Margaret Hospital on Saturday June 14, 2008 from 2:00pm to 9:00pm. The nurses spoke to her and she went to one of the casualty rooms. There was an overwhelmingly strong stench in the room. There was a plastic bag in the centre of the casualty bed.

The officers opened the bag, and therein was a human head. The head was wet and dripping, graying in colour and there were patches of hair missing. The eyeballs were protruding. There was a lot of swelling to the face. She also observed that the area where it was severed from the body the cut jagged. It was not a nice clean straight cut. Because of decomposition, separation could have been 72 hours give or take some hours.

The case continues this week.