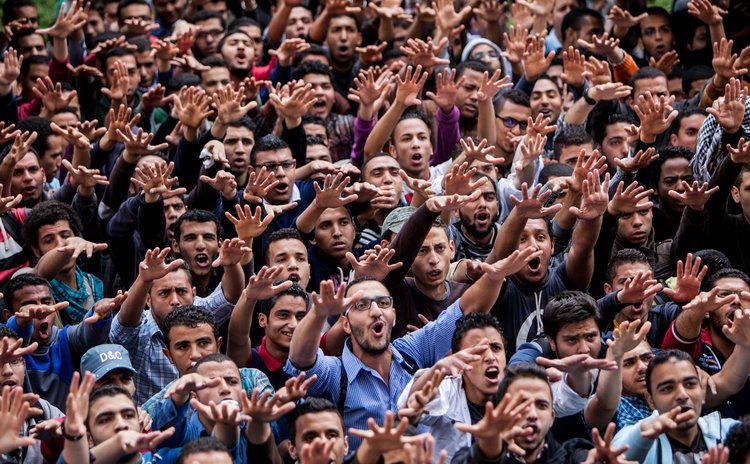 The Brotherhood suspects were charged with attacking a police premise in Mattai district and killing its deputy head after the dispersal of a major sit-in staged by supporters of ousted president Mohamed Morsi in Cairo last August.

They were also accused of breaking into governmental institutions, shooting randomly on security men, stealing police weapons, and burning police stations, along with terrorizing local residents and disturbing public peace.

During the second hearing of the mass trial, 153 were in detention while the rest were sentenced in absentia. Other 16 defendants were acquitted.

The convicted are among more than 1,200 of Morsi supporters who are on trial in Minya. A second group of about 700 defendants including the supreme guide of the Muslim Brotherhood Mohamed Badie will stand trial on Tuesday.

Morsi, who hails from the Brotherhood, was ousted by the army on July 3, 2013 in response to mass protests over his turbulent one year in rule.

Thousands of Brotherhood members are on trial including Morsi himself on charges of killing protesters, inciting violence and cooperating with foreign groups against the country's national security.

The Islamist group was blacklisted as a terrorist organization last December following a militant attack against a police headquarters which killed 16 people in the Nile Delta city of Mansoura.

In an immediate response, the National Alliance to Support Legitimacy called for mass protests on Wednesday at Tahrir square, the epic center of the 2011 uprising that ousted president Hosni Mubarak, along with Rabaa al-Adaweya and Nahda squares, the two bases for Morsi's sit-ins.

In a statement posted on its facebook page, the alliance urged the people to raise the Egyptian flag and Rabaa four finger symbol, a political gesture for resistance against the security forces crackdown on Islamists.