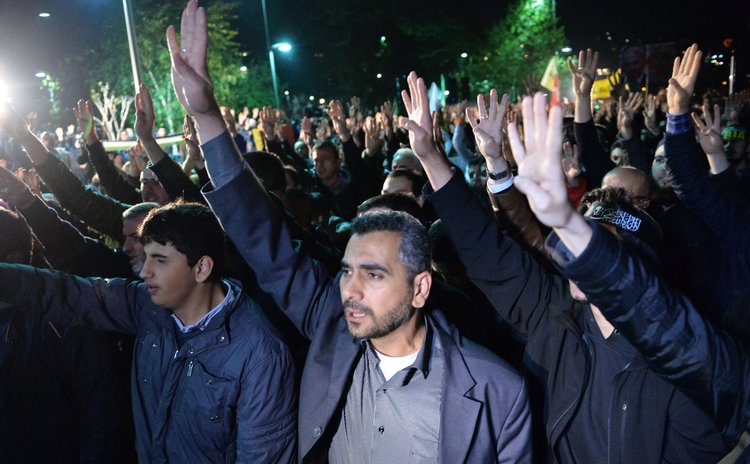 The defendants are accused of inciting violence and murdering policemen deliberately at Al-Adwa town in Egypt's southern province of Minya last year.

The files of the defendants will be passed to the country's Mufti, the highest religious authority, to give his Islamic legal opinion on the death sentences, which is not legally binding and could be ignored by the court.

Last month, the same court sentenced 529 Brotherhood members and supporters to death and referred their files to the Mufti who confirmed only 37 executions.

The court handed down its final capital punishment for the 37 and sentenced the remaining defendants to life in prison.

The defense staff of the 37 defendants in Minya said they would appeal the death sentences within 60 days according to the law.

Violence has broken out following the ouster of Islamist President Mohamed Morsi by the military since last July.

In response, furious supporters of the deposed president staged anti-police rallies across the country that extended to storming police stations in dozens of provinces including Minya.

Late December, the Brotherhood group, from which Morsi hailed, was blacklisted by the interim-government as a "terrorist organization." Morsi himself is currently facing trials over urging the killing of protesters, espionage, jailbreak and insulting the judiciary.

A pro-Morsi Brotherhood-led alliance of Islamist groups announced on Monday that it would boycott the upcoming presidential elections, slated for late May, referring to them as "farce."

Ex-military chief Abdel-Fattah al-Sisi, whose popularity surged after the removal of Morsi, is expected to make an easy win over his leftist sole opponent Hamdeen Sabahy in the May 26-27 presidential polls.

On the other hand, Cairo Court for Urgent Matters decided Monday to ban the activities of the April 6 Youth Movement over charges of "spying and distorting the image of Egypt," official MENA news agency reported.

The lawsuit was filed by independent lawyer Ashraf Saeed who demanded banning the activities of the movement and seizing its headquarters over the charges.

Earlier this month, founder of April 6 Youth Movement along with other anti-government youth activists have been sentenced to three years in prison over protesting against a controversial anti- protest law.

The movement played major roles in mobilizing youth for ousting former long-time ruler Hosni Mubarak in early 2011 and in the rebel campaign that led to the removal of Islamist president Mohamed Morsi.

In the first reaction from the newly-banned movement, a leading member told Xinhua that they were used to "such repressive measures" and that they would not give up.

"This verdict means nothing to us as we are Egyptians and the constitution guarantees our right of peaceful assembly," said Amr Ali, general coordinator of April 6 Movement.

"The purpose of this ruling is to pave the way for the military- backed candidate Sisi with getting rid of anti-government groups," he told Xinhua, noting the move would discourage Egyptian youth from taking part in the coming polls.

April 6 Youth Movement supported the post-Morsi military-backed interim leadership but it gradually turned against the government over massive security crackdown on anti-government protesters regardless of their affiliations.

The opposition political movement was founded in 2008 by a number of youths in support of a general strike held then by textile workers of Al-Mahalla, the largest city of Gharbiya governorate north of Cairo, during the reign of military strongman Mubarak.

The youth of the movement do not belong to any political parties nor do they have any ideological affiliations.

They officially supported Morsi and the Brotherhood in the 2012 presidential run-off elections against Mubarak's last prime minister Ahmed Shafiq, yet they turned against Morsi arguing he did not fulfill his presidential campaign promises.