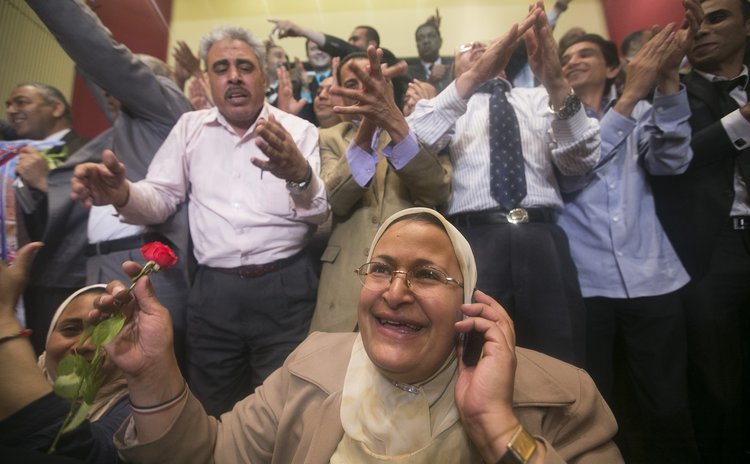 CAIRO, June 3 (Xinhua/Sun) -- Egypt's presidential election commission on Tuesday officially announced ex-military chief Abdel- Fattah al-Sisi to be the new president of the most populous Arab state, after achieving a landslide victory over leftist candidate Hamdeen Sabahy in the three-day polls held in late May.

"Presidential candidate Abdel-Fattah Saeed Hussein Khalil al- Sisi got 23,780,104 votes, which represents 96.91 percent of the votes," Judge Anwar al-Assi, chairman of the election commission, announced at a press conference, adding that leftist leader Sabahy got 757,511 of the total valid votes, which represent about 3.1 percent.

Assi said that more than 25 million out of the 53.9 million eligible voters joined the polls, giving a voter turnout of 47.45 percent.

"Accordingly, the winner of the post of president of the Arab Republic of Egypt is Abdel-Fattah al-Sisi," Assi announced.

The head of the commission said the election was "fair and free " and was monitored by more than 100,000 foreign observers and over 15,500 local observers, noting that the European Union, the African Union, the Arab League, the European and the Arab parliaments as well as other regional and international bodies took part in monitoring the polls.

The vote was previously scheduled for May 26 and 27, but the commission decided to extend voting for an extra day due to the hot weather and to give a chance to non-resident voters to go back to their original provinces to cast their votes, according to Assi.

He added that the commission had to recount seven polling stations and invalidate eleven others across the country to maintain the transparency of the results.

In his first statement after the result is officially announced, Sisi praised all voters and also commended his leftist presidential rival Sababy "for providing an earnest chance" for a democratic competition.

"I will work earnestly to achieve good living, freedom, human dignity and social justice for all Egyptians," President Sisi said in a televised speech on Tuesday evening. He urged all Egyptians to work together for the success of the country.

In response, the defeated candidate Sabahy congratulated Sisi on Tuesday evening over the phone and wished him success, according to official Ahram news website. Sabahy has previously admitted his loss in the elections, saying he respected voters' choice.

Meanwhile, a lot of Sisi's supporters took to the streets and public squares across the country on Tuesday, including the iconic Tahrir Square in the capital Cairo, to celebrate his victory.

Military tanks closed all roads leading to the Tahrir Square, allowing only pedestrians to enter, as many Egyptians were there since the afternoon waving flags of Egypt and raising posters of Sisi.

They also set off fireworks and played national songs, chanting statements of support for Sisi, whom they see as a strong leader who can rule the country after three years of political chaos and economic woes.

A number of Arab leaders also sent congratulatory telegrams to the newly elected president and to offer support for Egypt and its citizens under the new leadership.

Saudi King Abdullah bin Abdulaziz Al-Saud told Sisi in a telegram on Tuesday that his election as president marked "a historical day and a new stage for Egypt."

"We're glad to congratulate you on the honorable confidence of the people who have trusted you with their hopes, aspirations and dreams of a better future," the kingdom's state news agency SPA quoted the king as saying.

The king also called all supporting states around the globe to hold a donor conference to revive Egypt's flagging economy.

"I would say to brothers and friends across the globe that Egypt is in dire need for our support today to get out of its tunnel of the unknown," the Saudi king said.

Saudi Arabia, a major regional powerhouse, has thrown its weight behind Sisi since he led the military ouster of former Islamist President Mohamed Morsi last July, pledging a package of aids worth billions of U.S. dollars to help the turmoil-stricken country.